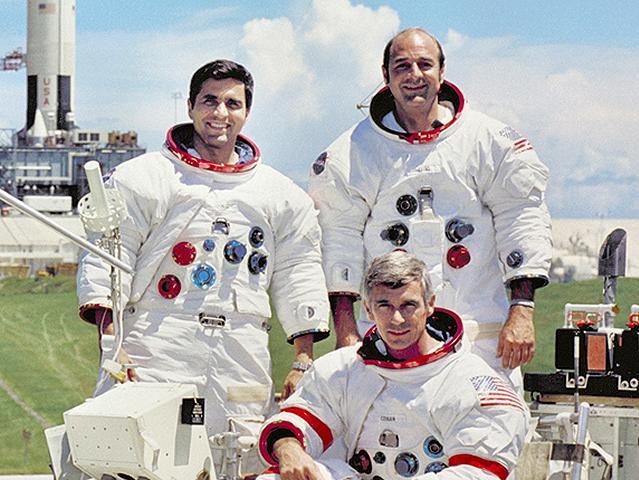 On December 11, 1972, Apollo 17 with Commander Eugene A. Cernan, Command Module Pilot Ronald E. Evans, and Lunar Module Pilot Harrison H. Schmitt landed in the Taurus-Littrow valley on the lunar surface and were (so far) the last men to set foot on the Moon. Apollo 17 was the eleventh and final mission of the United States‘ Apollo program, the sixth mission to land humans on the Moon.

While earlier Apollo missions [11] were important to gain political and technological superiority, the Apollo 17 mission was performed to scientifically explore the Moon. The mission included geological surveying, wherefore there was a professional geologist, Harrison Schmitt on board. Schmitt was one of a special group of scientific astronauts selected by NASA in 1965, none of whom had yet been deployed. Various materials were observed and surface experiments, as well as in-flight experiments were performed. To hit all research goals, a great amount of rock and soil samples were taken to Earth. 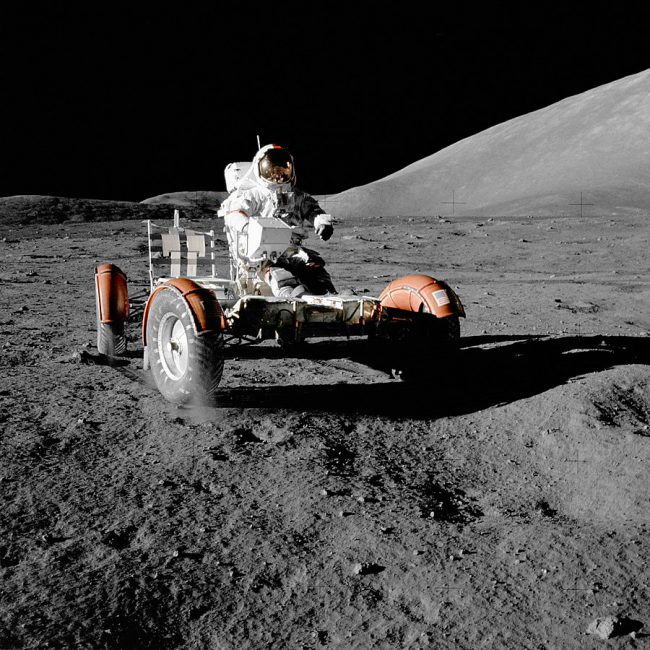 The spaceship launched on December 7, and when the ship reached the lunar orbit the crew was enjoying a deep sleep. Apollo 17 was the last manned space flight with a Saturn V rocket. The scientists on Earth needed 70 minutes to wake them up with loud music. But fortunately, they landed safely in the Taurus-Littrow valley on December 11. Cernan and Schmitt landed with the lunar ferry “Challenger” north of the Mons Vitruvius at a foothills of the Mare Serenitatis. This landing location was chosen in the hope to find the oldest and most interesting rocks with the help of the onboard geologist. The astronauts were to carry out three EVAs on this mission. The Apollo lunar surface experiment package (ALSEP), equipped with a radionuclide battery, was built near the landing site during the first EVA (Extravehicular Activity), slightly further away than the remaining experiments.

After the Lunar Rovers [10] were assembled and the ALSEP was built, explosives were placed and later ignited remote-controlled to gain information about the Moon’s structure. The exploration with the Lunar Rovers were an important task of the mission, since a wide area could be covered. After problems with the rovers in previous missions, this time there were no difficulties at Apollo 17. A shock hit the crew though, when Cernan damaged a mudguard during a mission, so that moon dust flew on the drivers and significantly impaired their vision. But Cernan was able to repair it with tape, just like we would do it on Earth 😉 While they collected a total of 110.4 kg of lunar material, they discovered small orange and 3 billion years old small bullets that presumably resulted from volcanic activities on the Moon.

The Last Man on the Moon

Luckily, every goal of the mission was hit and it was obligated to Commander Eugene Cernan to take the so far lasts steps of humankind on the Moon before the crew headed back to Earth safely. On 14 December 1972 at 05:40 UTC Cernan was the last man to leave the lunar surface, which has not been entered again by humans until today. They were recovered in the Pacific Ocean on December 19, 1972.

“I’m on the surface; and, as I take man’s last step from the surface, back home for some time to come – but we believe not too long into the future – I’d like to just [say] what I believe history will record. That America’s challenge of today has forged man’s destiny of tomorrow. And, as we leave the Moon at Taurus-Littrow, we leave as we came and, God willing, as we shall return, with peace and hope for all mankind. Godspeed the crew of Apollo 17.”
— Eugene Cernan’s farewell message when leaving the Moon

The originally planned missions Apollo 18, 19 and 20 were cancelled before Apollo 15 for both political and financial reasons. The Soviet Union never realized an adequate technology  for a manned moon landing after other, also later successes.[5,6,7,8,9]