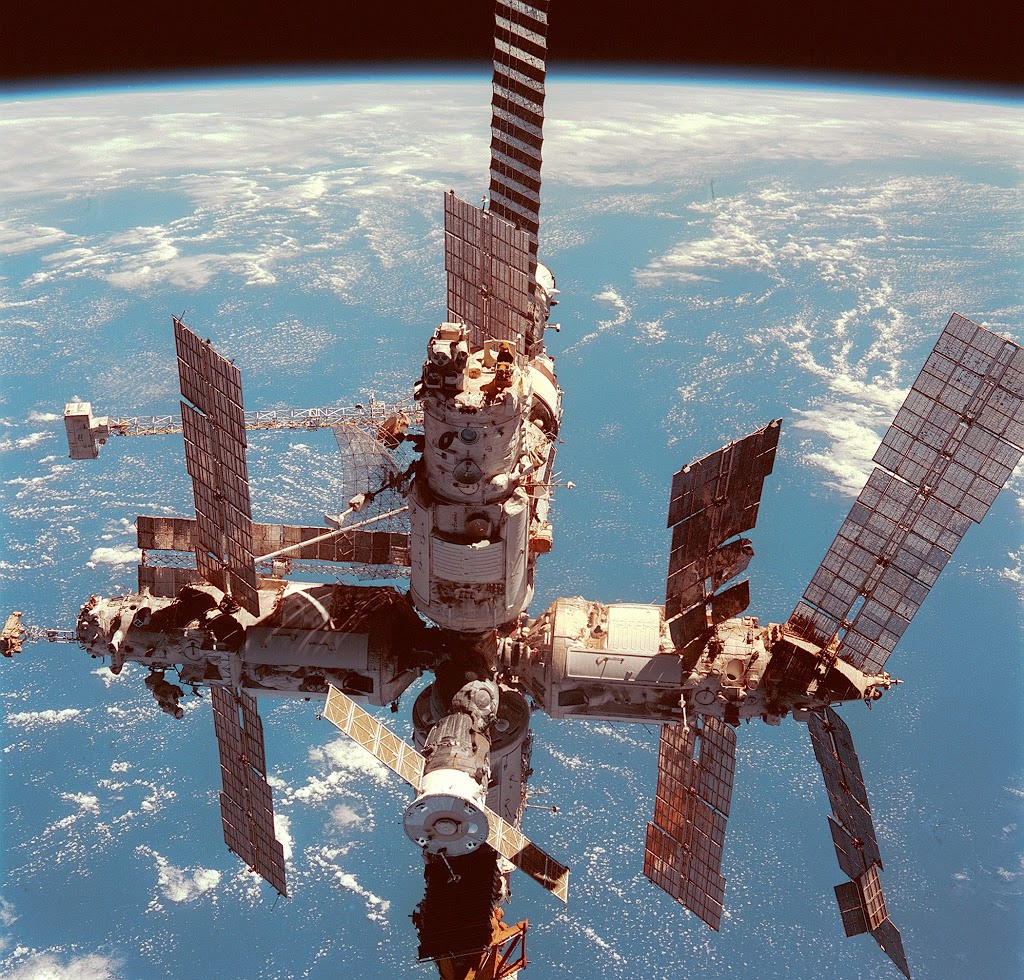 On February 19, 1986, the main module of Russian MIR Space Station was launched from Baikonur, Russia. MIR was the first modular space station and operated in low Earth orbit from 1986 to 2001.

Launch to a Low Earth Orbit

In 1976, MIR was authorized in order to design an improved model of the Salyut space stations. By early 1984, work on MIR had halted while all resources were being put into the Buran programme in order to prepare the Buran spacecraft for flight testing.[5] Funding resumed in early 1984 when Valentin Glushko was ordered by the Central Committee‘s Secretary for Space and Defence to orbit MIR by early 1986, in time for the 27th Communist Party Congress and in 1986, the second launch attempt was successful and MIR made its way up to the low Earth orbit. It was maintained in a near circular orbit with an average perigee of 354 km and an average apogee of 374 km. The station completed 15.7 orbits per day and had to be boosted to a higher altitude several times each year. Due to its orbital altitude, the on-board environment was not really zero gravity, it was often referred to as microgravity since the state of weightlessness was not perfect. An earth-like atmosphere was established on-board, because it offers significant benefits for the crew’s comfort, and it is much safer than the alternative, a pure oxygen atmosphere. This would have increased the risk of a fire such as that responsible for the deaths of the Apollo 1 crew.

The station’s assembly marked the beginning of the third generation of space station design, being the first to consist of more than one primary spacecraft. First generation stations such as Salyut 1 and Skylab had monolithic designs, consisting of one module with no resupply capability [6]. The second generation stations Salyut 6 and Salyut 7 comprised a monolithic station with two ports to allow consumables to be replenished by cargo spacecraft such as Progress. The capability of MIR to be expanded with add-on modules meant that each could be designed with a specific purpose in mind, thus eliminating the need to install all the station’s equipment in one module. 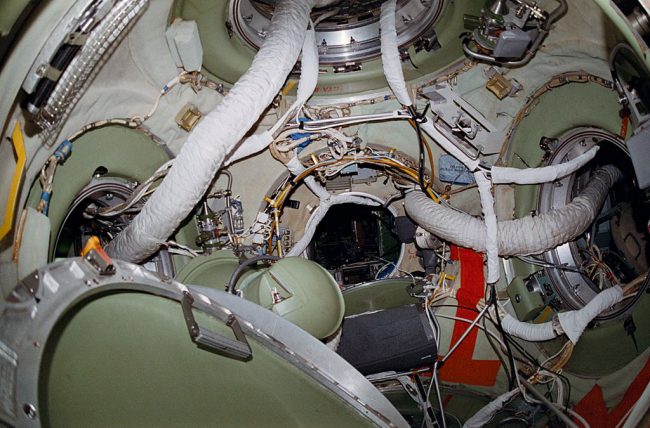 A view of the interior of the docking node of the Russian space station Mir’s core module, showing the hatches leading to the station’s various modules and the cables and hoses trailing through them.

MIR-2, Freedom and the ISS

In order to allow members from the military forces of allied Warsaw Pact countries to participate in manned and unmanned space exploration missions, the Interkosmos space program was founded. Many European astronauts were able to visit Mir as part of several cooperative programs, and Mir became the most visited spacecraft in history, being visited by over 100 different people. The United States however, planned to launch Mir’s counterpart Freedom as soon as possible, and also a construction of MIR-2 was in the Soviet’s thoughts. But with the fall of the Soviet Union and the end of the Space race, both programs got cancelled and both countries decided to work on a similar project together. In the first act of the new cooperation one American astronaut deployed to the Russian space station Mir and two Russian cosmonauts deployed to a Space Shuttle. Russian and American scientists learned from each other and in 1993, U.S. Vice President Al Gore, Jr., and Russian Prime Minister Viktor Chernomyrdin announced plans for a new space station, which eventually became the International Space Station.

But coming back to the space station Mir, the crew had to deal with quite a labyrinth of cables and instruments on board. Most of the time, the station housed three people but was designed to support six for about one month. The used time zone on board was Moscow Time and a typical day for the crew members started with two hours of hygiene and breakfast. From 10am to 1pm, work was conducted and followed by one hour of exercise and lunch. After that, the crew worked for three more hours and exercised for another four hours. In their free time, the cosmonauts answered letters and drawings from Earth, caught up with work or communicated with their loved ones on Earth. 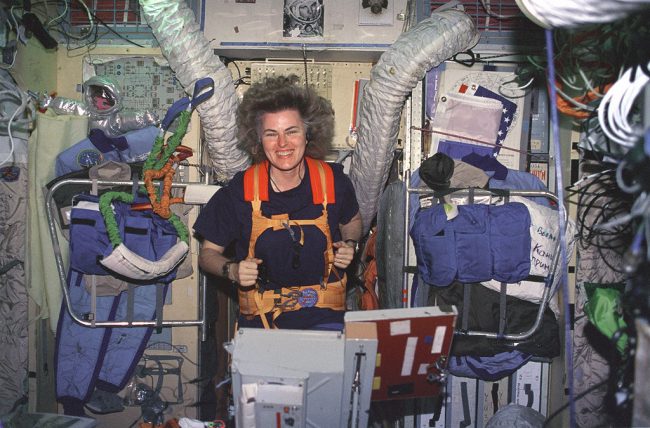 Astronaut Shannon Lucid exercises on a treadmill which has been assembled in the Russian Mir space station Base Block module.

MIR was the first continuously inhabited long-term research station in orbit and held the record for the longest continuous human presence in space at 3,644 days, until it was surpassed by the ISS on 23 October 2010. It holds the record for the longest single human spaceflight, with Valeri Polyakov spending 437 days and 18 hours on the station between 1994 and 1995. Mir was occupied for a total of twelve and a half years out of its fifteen-year lifespan, having the capacity to support a resident crew of three, or larger crews for short visits.

It was announced that due to a lack of funding to keep MIR flying, the station would be deorbited in June 1999. In order to deorbit the station, a special analogue computer was installed and each of the modules, starting with the docking module and on March 23, 2011, Mir reentered Earth’s atmosphere and landed in the Pacific Ocean as you can read in another article in SciHi Blog…[4]