You are here: Home › medical science › Joseph Hamilton and the Health Effects of Radioactive Isotopes 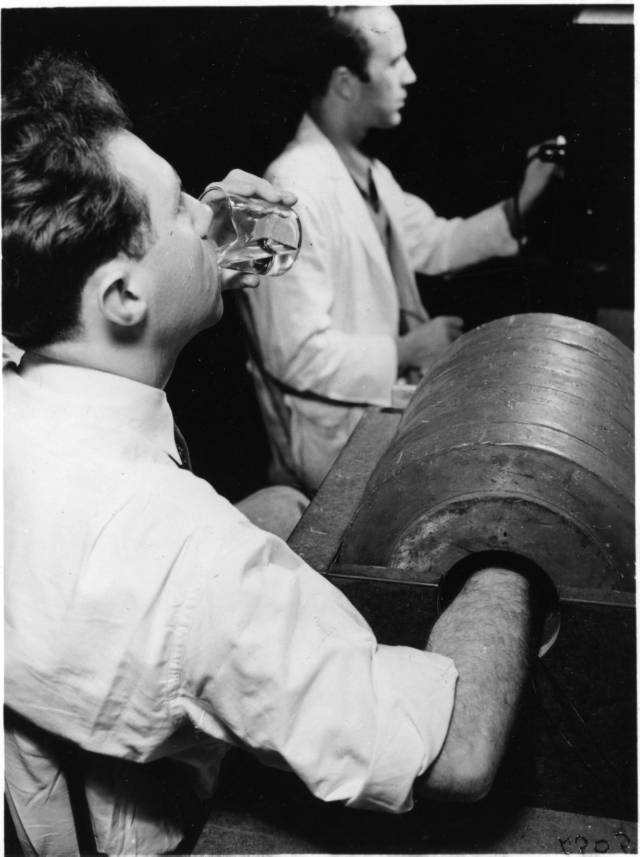 Education and Research in Radionuclides

Together with the medical physicist John Lawrence, he ran the radiation laboratory of the University of Berkeley (later renamed Lawrence Berkeley Laboratory) from 1942. Back then, the cyclotron at Berkeley was one of the first to produce useful amounts of radioactive isotopes.[4] Hamilton used those to study the effects of radioactive isotopes to living tissue. After the Manhattan Project started operating, safety concerns grew because many scientists were exposed to newly isolated plutonium for their research. Hamilton began leading a team who conducted toxicity experiments on rats. However, he soon found the work with rats insufficient and he continued his experiments with human subjects.

In 1945-46, Hamilton initiated the injection of plutonium into a number of seriously ill patients, including children, in his laboratory and partner clinics in Rochester and Chicago. These secretly conducted experiments were completed from 1945 to 1947 in three teams surrounding Louis Hempelmann, Wright Haskell Langham and Joseph Gilbert Hamilton. The scientists injected plutonium into unsuspecting human patients and then measured its concentration in excreta. It is assumed that during these experiments, 18 subjects received injections. Three of them received their ‘treatment’ by Joseph Gilbert Hamilton’s team at University of California Hospital, San Francisco.

Nothing is known about the negative consequences for the test subjects. These experiments, which were not carried out with the intention of healing and without the consent of the patients, are nevertheless generally classified as unethical. The Atomic Energy Commission, founded in 1946, had the series of experiments discontinued. In 1950 Hamilton himself wrote that the human experiments had the “smell of beech forest”.

One of these patients was Albert Stevens who had been diagnosed with terminal stomach cancer (it was later found to be an ulcer). He was recorded as having survived the highest known accumulated radiation dose of any human. He lived 20 years after receiving his injections and became 79. Another one of the patients was the four-year old Simeon Shaw who had been disgnosed with bone cancer and died the same 255 days after her injections. Elmer Allen was 36 when she received her injections and lived for 44 more years after that from respiratory failure, pneumonia. He died in 1991 shortly before Eileen Welsome could interview Allen for her work in exposing the trials.

The U. S. Atomic Energy Commission

Hamilton’s work became the principal source for the U.S. Atomic Energy Commission setting of far lower tolerance limits of these substances than had been theorised before trials. After the Atomic Enery Commission took over the Manhattan Project’s various roles, Hamilton returned to his work in Berkeley. He wrote a memo including recommendations to Shield Warren, back then the AEC’s Director of Biology and Medicine. The scientist suggested to use chimpanzees instead of humans in the planned studies on radiation’s cognitive effects. He warned that by using humans the AEC would be open “to considerable criticism,” since the experiments as proposed had “a little of the Buchenwald touch.” During the 1960s and early 1970s, Dr. Eugene Saenger carried out these experiments at the University of Cincinnati, exposing “at least 90 cancer patients to large radiation doses.”

In 1993, the American journalist Eileen Welsome published The Plutonium Experiment. In it, she exposed the government’s human radiation experiments conducted on unwilling and unknowing Americans during the Cold War. For these reports she was awarded the Pulitzer Prize. In 1999, she also published the successful book The Plutonium Files: America’s Secret Medical Experiments in the Cold War.

At about the same time as the described experiments, Hamilton also checked on behalf of the government whether radionuclides were suitable as weapons of mass destruction. The US Department of Defense had a corresponding research program in Dugway/Utah, which was discontinued in 1953 to disappoint Hamilton. 1949-53 Hamilton was responsible for test safety in this project. In 1957 Hamilton died of leukaemia. His colleagues agreed that he had contracted this disease due to a lack of caution in handling radionuclides.