You are here: Home › aviation › Jack Northrop and the Flying Wing Design 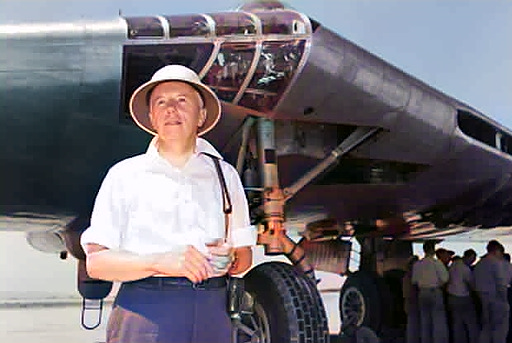 On November 10, 1895, American aircraft industrialist and designer Jack Northrop was born. Northrop was an early advocate of all-metal construction and the flying wing design. He founded the Northrop Corporation in 1939.

A Boy of Restless Ambition

John “Jack” Knudsen Northrop was born in Newark, New Jersey, USA, and grew up in Santa Barbara, California. The course for his life was set in 1911 upon watching a visiting pilot fly a pusher biplane over Santa Barbara. Nevertheless, his high school graduation represented the completion of the only formal education he would ever receive. For his lack of engineering degrees, Northrop would compensate with a ferocious work ethic, tremendous drive, and restless ambition.[1]

In 1916 Northrop’s first job in aviation was in working as a draftsman for the Santa Barbara based Loughead Aircraft Manufacturing Company (soon to be phonetically rebranded as “Lockheed”). He spent WW I engineering flying boats and designing wings. But it was after the war when Northrop’s design approach first revealed itself with clarity. His S-1 single-place biplane was introduced in 1919 and intended for the civilian market place. Sporting a monocoque fuselage and folding wings, the aircraft was innovative, ingenious, and years ahead of its time. The S-1 was an engineering triumph and a business failure and Lockheed collapsed in 1920.[1]

In 1923, Northrop joined Douglas Aircraft Company, participating in the design of the Douglas Round-the-World-Cruiser and working up to project engineer. In early 1927, Northrop assisted Jack Ryan of Ryan Aircraft in the larger wing design used on Lindbergh’s plane “The Spirit of St Louis” that would later make the New York to Paris flight in May 1927.[2]

Working for Lockheed and Douglas

In 1927 he rejoined the Loughead brothers and their newly renamed Lockheed Aircraft Company, working as chief engineer on the Lockheed Vega, the civilian transport monoplane with a cantilever wing that produced unusually high performance for that period, and was widely used by such top pilots as Wiley Post,[5] Amelia Earhart,[3] and Hubert Wilkins. In 1929, he produced an all-metal monoplane with pilot and engine within the wing structure. Although this aircraft had booms to attach the tail group, it was in fact the first step toward the flying wing. In 1929, Northrop struck out on his own, founding the Avion Corporation, which he was forced to sell to United Aircraft and Transport Corporation in 1930. In 1932, Northrop, backed by Donald Douglas of Douglas Aircraft, founded another company, the Northrop Corporation in El Segundo, California. This company built two highly successful monoplanes, the Northrop Gamma and Northrop Delta.

By 1939 the Northrop Corporation had become a subsidiary of Douglas Aircraft, so Northrop founded another completely independent company of the same name in Hawthorne, California. Northrop focused on the flying wing design, which he was convinced was the next major step in aircraft design. A flying wing is a tailless fixed-wing aircraft that has no definite fuselage. The crew, payload, fuel, and equipment are typically housed inside the main wing structure, although a flying wing may have various small protuberances such as pods, nacelles, blisters, booms, or vertical stabilizers. Tailless aircraft have been experimented with since the earliest attempts to fly. From 1910 J. W. Dunne‘s swept-wing biplane and monoplane designs displayed inherent stability.

Hugo Junkers patented a wing-only air transport concept around the same time, in 1910. He saw it as a natural solution to the problem of building an airliner large enough to carry a reasonable passenger load and enough fuel to cross the Atlantic in regular service. He believed that the flying wing’s potentially large internal volume and low drag made it an obvious design for this role. His deep-chord monoplane wing was incorporated in the otherwise conventional Junkers J 1 in December 1915. In 1919 he started work on his “Giant” JG1 design, intended to seat passengers within a thick wing, but two years later the Allied Aeronautical Commission of Control ordered the incomplete JG1 destroyed for exceeding postwar size limits on German aircraft. The Soviet Boris Ivanovich Cheranovsky began testing tailless flying wing gliders in 1924. In Germany, Alexander Lippisch worked first on tailless types before progressively moving to flying wings, while the Horten brothers developed a series of flying wing gliders through the 1930s.[6] The H1 glider was flown with partial success in 1933, and the subsequent H2 flown successfully in both glider and powered variants.

Northrop’s first project, the N-1M, was a reduced-scale version tested in 1940, which ultimately became the giant long range bomber Northrop YB-35. Built mostly of specially laminated layers of glued wood, the design of both wooden wings allowed for easy configuration changes with the central blended fuselage, which was made of tubular steel. The diminutive, twin-engine test aircraft served its purpose well, first taking to the skies on 3 July 1941 at Baker Dry Lake in California. The N-1M proved to be basically sound, paving the way for Northrop’s later and much larger Northrop YB-35 and YB-49 aircraft. By World War II aerodynamic issues were well enough understood for work on production prototypes to begin while research continued. In 1942 Northrop flew the N-9M scale development aircraft for a proposed long-range bomber.

The German Horten Ho 229 of March 1944 was the world’s first twin jet engine pure flying wing, and pre-production examples were test-flown during the closing stages of the war. The work on the Northrop N-1M led to the YB-35, with pre-production machines flying in 1946. This was superseded the next year by conversion of the type to jet power as the YB-49 of 1947. The design did not offer a great advantage in range, presented a number of technical problems and did not enter production. With the arrival of the supersonic era, military interest faded due to the conflicting demands of a thin wing for supersonic flight against a thick wing to accommodate the crew and equipment. Interest in flying wings was renewed in the 1980s due to their potentially low radar reflection cross-sections for stealth technology.

Northrop’s Legacy and The B-2 Spirit

Northrop’s ideas regarding flying wing technology were years ahead of the computer and electronic advances of “fly-by-wire” stability systems which allow inherently unstable aircraft like the B-2 Spirit flying wing to be flown like a conventional aircraft. The flying wing and the pursuit of low drag high lift designs were Northrop’s passion, and its failure to be selected as the next generation bomber platform after World War II, and the subsequent destruction of all prototypes and incomplete YB-49s ordered by the federal government were a blow from which he never recovered, causing his association with Northrop Aviation to become almost non-existent for the next 30 years. By the late 1970s a variety of illnesses had left Northrop unable to walk or speak. Shortly before his death in 1981, he was given clearance to see designs and hold a scale model of the Northrop Grumman B-2 Spirit which shared many of the design features of his YB-35 and YB-49 designs. Jack Northrop died on February 18, 1981, aged 85.