You are here: Home › physics › Ernest Lawrence and the Invention of the Cyclotron 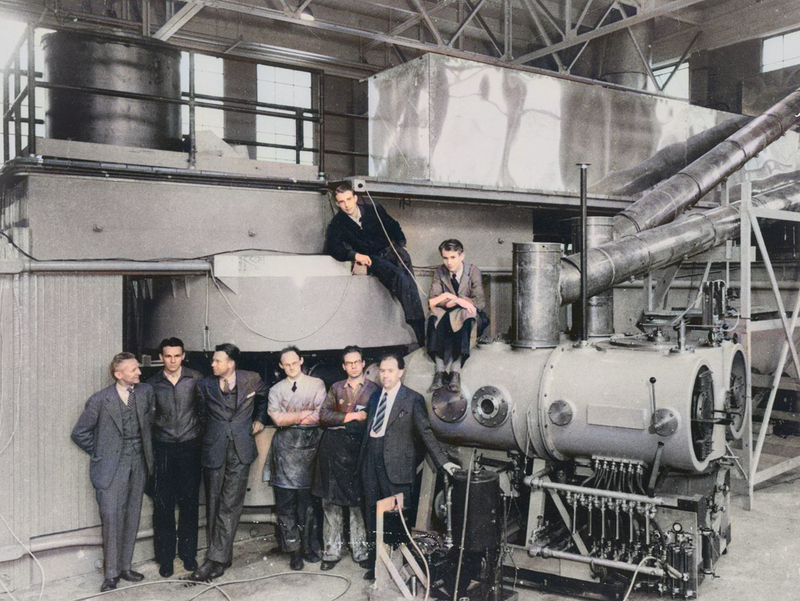 On August 8, 1901, pioneering American nuclear scientist Ernest Orlando Lawrence was born. He was awarded the 1939 Nobel Prize in Physics for his invention of the cyclotron. He is also known for his work on uranium-isotope separation for the Manhattan Project, and for founding the Lawrence Berkeley Laboratory and the Lawrence Livermore Laboratory.

“I am mindful that scientific achievement is rooted in the past, is cultivated to full stature by many contemporaries and flourishes only in favorable environment. No individual is alone responsible for a single stepping stone along the path of progress, and where the path is smooth progress is most rapid. In my own work this has been particularly true.”
— Ernest Orlando Lawrence, Nobel Prize banquet speech (29 Feb 1940)

Growing Up in South Dakota

Ernest Lawrence grew up in South Dakota. His parents were offsprings of Norwegian immigrants and taught at the high school in Canton, South Dakota. His mother, Gunda, remembered his enormous curiosity when he was still a child. Apparently, the two-year-old Lawrence managed to light a fire with matches and burn down all of his clothes. His mother further remembered that “Ernest was always of a happy disposition and life to him seemed to be one thrill after another, but he was also always persistent and insistent!“. With his high school friends, Lawrence built a very early short-wave radio transmitting station and later applied his experiences to the acceleration of protons [1,2].

Lawrence enrolled at the University of South Dakota and sold kitchenware to farming households in order to finance his education. This training was later helpful, when Lawrence had to sell scientific projects to government officials and funding agencies. After earning his Bachelor degree, the young physicist enrolled at the University of Minnesota in order to finish his master studies and he moved to Yale, where Lawrence received his Ph.D. in 1925. Before even turning 27 years old, Lawrence accepted an associate professor position at Berkeley, where he became the institution’s youngest full professor three years later [1]. In 1936 he became Director of the University’s Radiation Laboratory as well, remaining in these posts until his death [3].

It is assumed that while reading a scientific paper by Rolf Widerøe about a device that produced high-energy particles, he was inspired to work on a more compact accelerator that would fit into the Berkeley laboratories. After initial work on the ionization potential of metal vapors, Lawrence invented the cyclotron in 1929. The very first cyclotron he constructed was apparently only 10 cm in diameter and consisted of brass, wire, and sealing wax.In this period, Lawrence and his research group built a bigger machine, which he used to bombard various elements with accelerated particles. In rare cases, completely new elements and hundreds of previously unknown radioactive isotopes of known elements were generated by the particle bombardment. He applied for patent protection for his invention in the USA on January 26, 1932, which was granted to him on February 20, 1934. 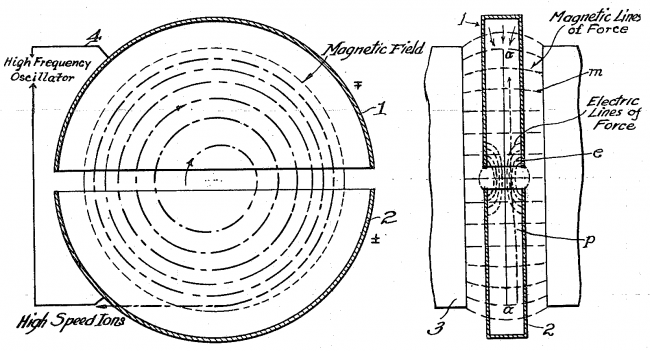 He was invited to the 1933 Solvay Conference to give a presentation on the cyclotron and Lawrence extended the apparatus to a 37-inch cyclotron in June 1937. Two years later, it was used for the first time to bombard iron and produce its first radioactive isotopes. With a more powerful cyclotron he was able to produce the mesons known from cosmic radiation for the first time in 1941, later he extended his studies to antiparticles. In the same year, the first cancer patient received neutron therapy from the cyclotron.

Ernest Lawrence was awarded the Nobel Prize in physics in 1939 and was the first at Berkeley to become a Nobel Laureate. The scientists was also known as an incredibly prolific writer. Most of his work was published in The Physical Review and the Proceedings of the National Academy of Sciences. He was decorated with numerous awards and prizes including Medal for Merit and he held honorary doctorates of thirteen American and one British University, the University of Glasgow [3].

Lawrence was instrumental in the development of the atomic bomb during the Second World War, after the war he campaigned for a nuclear test ban and was a member of the US delegation to the 1958 Geneva conference on the subject. After the war, Lawrence campaigned extensively for government sponsorship of large scientific programs.. The 103rd element of the chemical periodic table, Lawrencium (Lr), was named after him.

Ted Wilson, The History of Accelerators, [7]