On August 18, 1685, EnglishmathematicianBrook Taylor was born. He is best known for Taylor’s theorem and the Taylor series, a method for expanding functions into infinite series.

“It is generally thought very ridiculous to pretend to write an Heroic Poem, or a fine Discourse upon any Subject, without understanding the Propriety of the Language wrote in; and to me it seems no less ridiculous for one to pretend to make a good Picture without understanding Perspective…”
— Brook Taylor, New Principles of Linear Perspective (1715, 1749)

Brook Taylor was born in Edmonton to John Taylor of Bifrons House, Kent, and Olivia Tempest in 1685. It was the year when King Charles II passed away and his Roman Catholic brother succeeded him as King James II of England, the year of the Monmouth Rebellion, led by James Scott, 1st Duke of Monmouth, illegitimate son of Charles II. Newton was about to publish his Philosophiæ Naturalis Principia Mathematica (1687) [3,4] and Leibniz’s most important mathematical writings were about to be published.[5]

Brook Taylor grew up not only to be an accomplished musician and painter, but he applied his mathematical skills to both these areas later in his life. He entered St John’s College, Cambridge, as a fellow-commoner in 1701, and took degrees of LL.B. and LL.D. in 1709 and 1714, respectively. Having studied mathematics, in 1708 he obtained a remarkable solution of the problem of the “centre of oscillation,” which, however, remained unpublished until May1714, when his claim to priority was disputed by Johann Bernoulli.[8]

In 1712Taylor was elected to the Royal Society, and acted as secretary to the society from 13 January1714 to 21 October1718. Clearly it was an election based more on the expertise which his tutors and others knew that Taylor had, rather than on his published results. Also in 1712Taylor was appointed to the committee set up to adjudicate on whether the claim of Newton or of Leibniz to have invented the calculus was correct. [1]

Taylor’sMethodus Incrementorum Directa et Inversa (1715) added a new branch to higher mathematics, now called the “calculus of finite differences“. Among other ingenious applications, he used it to determine the form of movement of a vibrating string, by him first successfully reduced to mechanical principles. The same work contained the celebrated formula known as Taylor’s formula, the importance of which remained unrecognized until 1772, when J. L. Lagrange proclaimed it the basic principle of the differential calculus.[6] 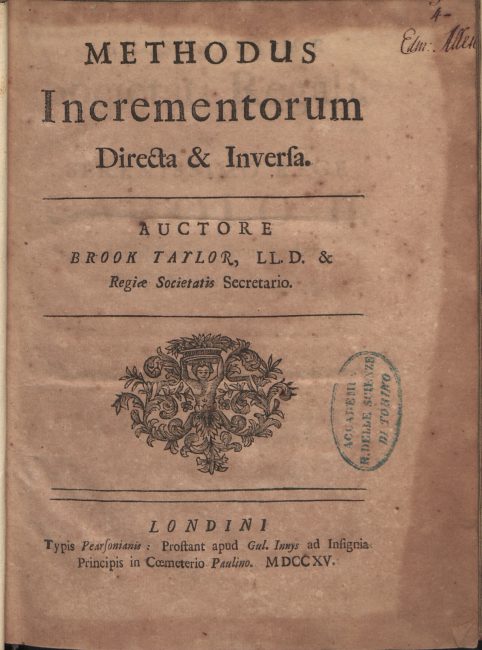 Between 1712 and 1724Taylor published thirteen articles on topics as diverse as describing experiments in capillary action, magnetism and thermometers. He gave an account of an experiment to discover the law of magnetic attraction (1715) and an improved method for approximating the roots of an equation by giving a new method for computing logarithms (1717).[1] A highly gifted artist, Taylor also wrote about the foundations of perspective in 1715 and was the first to describe the principle of the vanishing point.

Taylor was married twice. His marriage in 1721 with Miss Brydges of Wallington, Surrey, led to an estrangement from his father, which ended in 1723 after her death in giving birth to a son, who also died. In 1725 he married — this time with his father’s approval — Sabetta Sawbridge of Olantigh, Kent, who also died in childbirth in 1730. However, his daughter, Elizabeth, survived.

Taylor’s fragile health gave way and he fell into a decline, and died on 30 November1731, at age 46.

“As a mathematician he was the only Englishman, after Newton and Cotes, capable of holding his own with the Bernoullis; but a great part of the effect of his demonstrations was lost through his failure to express his ideas fully and clearly.“[2]

Learn more about Calculus in the lecture of MIT Prof. Dr. Gilbert Strang on ‘Highlights of Calculus’.