You are here: Home › psychology › Rensis Likert and the Likert Scale Method 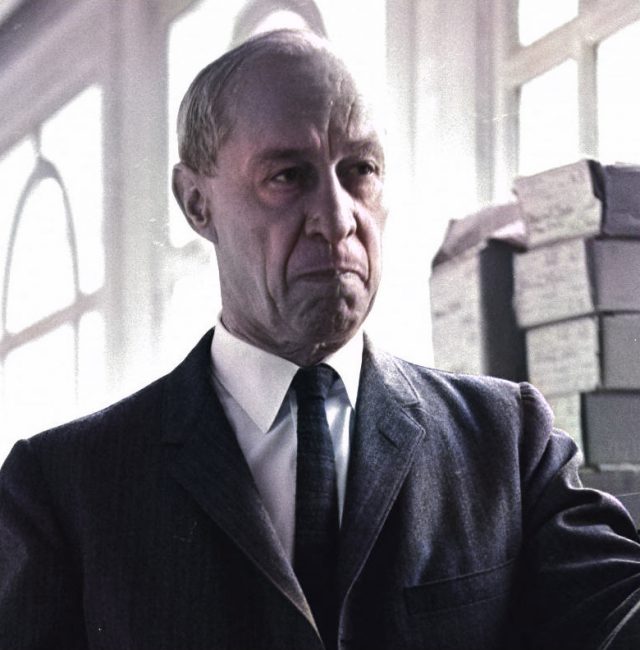 On August 5, 1903, American social psychologist Rensis Likert was born. Likert is primarily known for developing the Likert scale method, an approach to creating a psychometrically sound scale based on responses to multiple questions or “items.” Likert’s method has become a time-honored way to measure people’s reactions such as to opinion surveys as well as personality tests.

“A number of statistical assumptions are made in the application of his (Thurstone’s) attitude scale e.g. that the scale values of the statements are independent of the attitude distribution of the readers who sort the statements assumptions which as Thurstone points out, cannot always be verified. The method is more over laborious. It seems legitimate to enquire whether it actually does its work better than the simple scales which may be employed and the same breath to ask also whether it is not possible to construct equally reliable scales without making unnecessary statistical assumptions.”
– Rensis Likert, (1932) [1]

Rensis Likert was born in Cheyenne, Wyoming to George Herbert Likert and Cornelia Adrianna (Cora) Likert. Influenced by his father, who worked as an engineer with the Union Pacific Railroad, Likert studied civil engineering at the University of Michigan in Ann Arbor for three years. He worked as an intern with the Union Pacific Railroad during the watershed 1922 strike, which is where his spark for studying organizations and their behavior originated from. Likert decided to switch from studying civil engineering to economics and sociology at the University of Michigan, because of an influential professor named Robert Angell. He received his B.A in sociology in 1926. After graduation, he studied at the Union Theological Seminary for one year. Likert went on to receive his Ph.D. in psychology at Columbia University in 1932, in which he also devised the now famous Likert scale method. While studying at Columbia University, he approached the discipline of social psychology, which was a fairly recent field at this time. In 1935, Likert became the director of research for the Life Insurance Agency Management Association (LIAMA) in Hartford, Connecticut. During his time there, Likert began a program of research comparing and evaluating the effectiveness of different modes of supervision. He would end up co-authoring a book titled Public Opinion and the Individual (1938) with his mentor at Columbia, Gardner Murphy.

In 1939, Likert was invited to organize the Division of Program Surveys (DPS) in the Bureau of Agriculture Statistics (BAS). The purpose of the DPS was to gather farmers’ thoughts toward the New Deal programs sponsored by USDA, and to challenge the effects of the Great Depression. At war’s end the Department of Agriculture were forced by conservative Congressmen to stop its social survey work. Likert and his team (many of them academics on temporary wartime duty) decided to move together to a university. After scouting Cornell and Chicago, they accepted an offer in summer 1946 from the University of Michigan. They formed the Survey Research Center (SRC) at the University of Michigan. This became the Institute for Social Research (ISR) in 1949 when Dorwin Cartwright moved the Center for Group Dynamics from MIT to the University of Michigan. Likert was the director of ISR until 1970, when he retired. He moved to Honolulu, Hawaii with his wife, where he continued on with his work by forming Rensis Likert Associates to consult for numerous corporations. He also helped start what is now known as the Institute for Corporate Productivity.  Likert died at the age of 78 on September 3, 1981 in Ann Arbor, Michigan.

Likert contributed to the field of psychometrics by developing open-ended interviewing, a technique used to collect information about a person’s thoughts, experience, and preferences. It was common in the 1930s for researchers to use objective, closed-ended questions in order for the coding process to be valid. While this technique was used well in many domains, Likert saw the need for more opportunity to ask people about their attitudes towards various issues. Within open-ended interviewing, he and his colleagues invented the “funneling technique”, which is a way to keep the interview open for comments, but directed in a specific way. The interview would begin with the open-ended questions, but gradually move into more narrowed questions. Open-ended interviewing is highly used today in research studies when there is a need to understand people’s attitudes.

The method of creating a Likert scale is Rensis Likert’s best-known contribution. is a psychometric scale commonly involved in research that employs questionnaires. It is the most widely used approach to scaling responses in survey research, such that the term (or more accurately the Likert-type scale) is often used interchangeably with rating scale, although there are other types of rating scales.  Likert distinguished between a scale proper, which emerges from collective responses to a set of items (usually eight or more), and the format in which responses are scored along a range. Technically speaking, a Likert scale refers only to the former. The difference between these two concepts has to do with the distinction Likert made between the underlying phenomenon being investigated and the means of capturing variation that points to the underlying phenomenon. 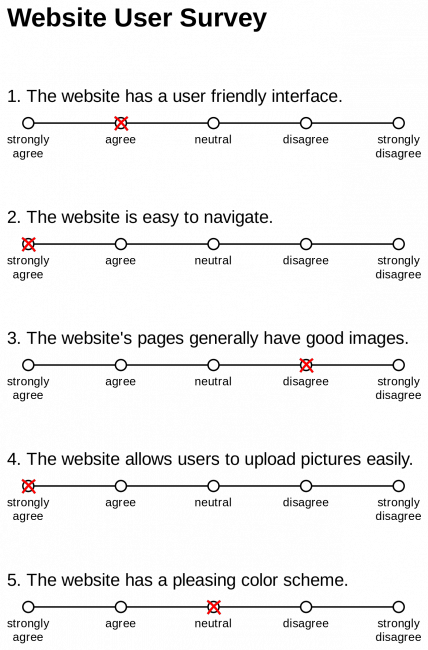 An example questionnaire about a website design, with answers as a Likert scale

When responding to a Likert item, respondents specify their level of agreement or disagreement on a symmetric agree-disagree scale for a series of statements. Thus, the range captures the intensity of their feelings for a given item. As such, Likert scales have found application in psychology and social sciences, statistics, business and marketing. A scale can be created as the simple sum or average of questionnaire responses over the set of individual items (questions). In so doing, Likert scaling assumes distances between each choice (answer option) are equal. Many researchers employ a set of such items that are highly correlated that show high internal consistency, but also that together will capture the full domain under study (which requires less-than perfect correlations). Others hold to a standard by which “All items are assumed to be replications of each other or in other words items are considered to be parallel instruments“. By contrast, modern test theory treats the difficulty of each item as information to be incorporated in scaling items.

In the 1950s, Likert and his team developed different management styles that are referred to as Likert’s Management System.He outlined four systems of management to describe the relationship, involvement, and roles of managers and subordinates in industrial settings. He based the systems on studies of highly productive supervisors and their team members of an American Insurance Company. Later, he and Jane G. Likert revised the systems to apply to educational settings. They initially intended to spell out the roles of principals, students, and teachers; eventually others such as superintendents, administrators, and parents were included. The management systems, established by Likert, include “Exploitative Authoritative (System I), Benevolent Authoritative (System II), Consultative (System III), and Participative (System IV).”