You are here: Home › astronomy › Charles Messier and the Discovery of Nebulae 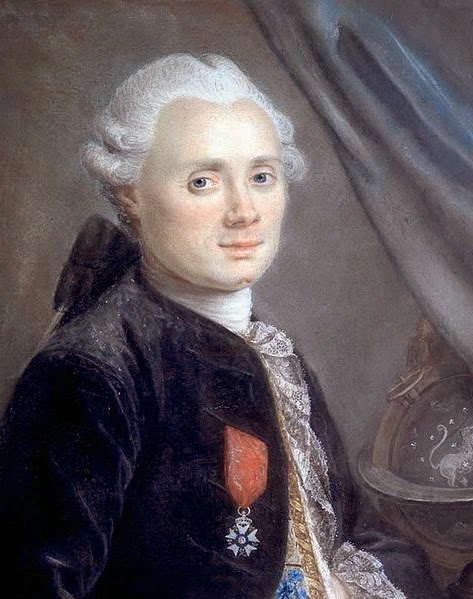 On June 26, 1730, French astronomer Charles Messier was born. He is best known for his publication of an astronomical catalogue consisting of nebulae and star clusters that came to be known as the 110 “Messier objects”. The purpose of the catalogue was to help astronomical observers, in particular comet hunters such as himself, distinguish between permanent and transient visually diffuse objects in the sky.

“What caused me to undertake the catalog was the nebula I discovered above the southern horn of Taurus on September 12, 1758, while observing the comet of that year. … This nebula had such a resemblance to a comet in its form and brightness that I endeavored to find others, so that astronomers would not confuse these same nebulae with comets just beginning to shine. I observed further with suitable refractors for the discovery of comets, and this is the purpose I had in mind in compiling the catalog.”
– Charles Messier

Messier was born in 1730 in Badonviller, the capital of the Principality of Salm, as the tenth of twelve children of the administrative officer Nicolas Messier. He came from a wealthy background. Six of his siblings died as children. It is assumed that his first motivations in the field were caused by the observation of the Great Comet of 1744, also known as the Comet Klinkenberg-Chéseaux. It was visible with the naked eye for several months and Messier was immediately fascinated by the object. At the age of 21, he decided to study astronomy in Paris under Nicholas Delisle the main astronomer of the French Navy. There he learned to work and observe very precisely while creating celestial charts. In 1754 he became a clerk in the navy where he had to draw maps among other things. Delisle taught him the basics of astronomy and urged him to give exact positional data of all observations

Observing Comets and the Transit of Venus

In his mid-30’s, Messier established his main interest to be the observation of and search for comets. During his life time he discovered approximately 20 of them. In 1757 he searched for Halley’s Comet and found it unfortunately too late due to a calculating error by Delisle. In 1761 he observed the famous transit of Planet Venus as well as several galaxies, star cluster, and nebulas. In 1771, he became Delisle’s successor, but lost his position a few years later due to several illnesses.[4] In 1770, at the age of 40, he married Marie-Françoise de Vermauchampt. One and a half years later, his wife and their son died eleven days after his birth.

Ten years later in 1781, he suffered serious injuries in a fall from which he only slowly recovered at the age of 51. During the French Revolution he lost his position and became impoverished. In 1796, however, he found a job at the Bureau des Longitudes. In 1806 Napoleon awarded him the Cross of the Legion of Honour. As his eyesight deteriorated, he observed, very aged, more and more seldom. The last comet he saw (with the help of others) was the Great Comet of 1807. In 1815 he suffered a stroke; two years later he died in Paris at the then very high age of almost 87 years.

Since 1757 Messier searched for the already expected Halley’s comet on behalf of Delisle,[5] but due to a miscalculation by Delisle he did not find it until January 1759 and thus four weeks after its rediscovery by Johann Georg Palitzsch. In 1761 he observed the Venus transit, three years later he succeeded in the first new discovery of a comet. All in all, he made twenty discoveries by 1801, including fourteen independent and six co-discoveries. In his search for new comets, he came across a large number of other objects such as galaxies, star clusters and nebulae. He had already observed the first of these formations – later called Messier 1 or M 1 – in 1758. In order to simplify his work, he specifically searched for further specimens. In doing so he also used the catalogues of Edmond Halley, Nicolas Louis de Lacaille, Jacopo Filippo Maraldi and Jean-Baptiste Le Gentil.

Finally, he listed these initially 45 objects in the Messier catalogue, later named after him, the first version of which was published in 1771. In 1774, Jérôme Lalande,[6] the then leading astronomer in France, introduced him to Pierre Méchain.[7] This led to a fruitful collaboration. By 1780 the catalogue had grown to 68 entries. In September 1782 Méchain discovered the 107th Messier object. From then on, Messier stopped his search for further nebulae and concentrated again on comets – probably because Wilhelm Herschel had begun observations with superior equipment.[8] The last version of his catalogue of 103 objects was published in Connaissance des temps in 1781 for the year 1784. Messier used a number of very different telescopes, including telescopes with focal lengths of up to seven metres and reflectors with mirror diameters of up to 20 cm aperture.