You are here: Home › philosophy › A Writer should not Allow Himself to be Turned into an Institution – Jean-Paul Sartre 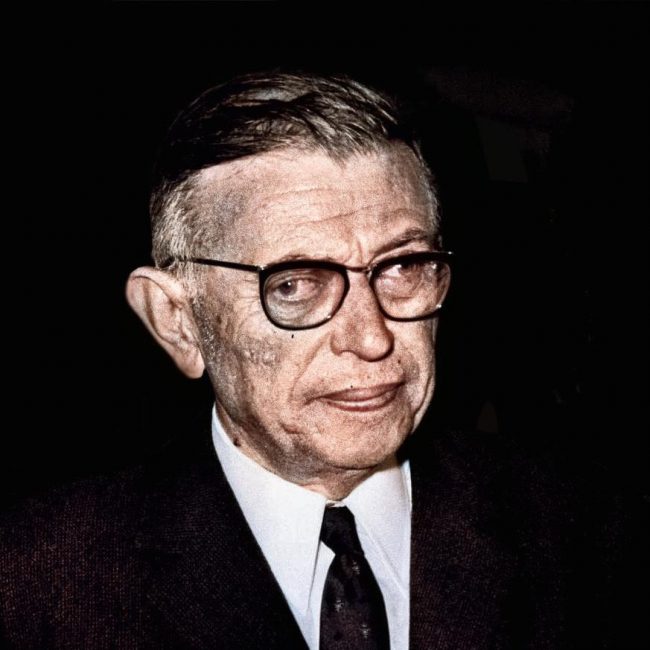 Jean-Paul Sartre was born on June 21, 1905 in Paris and has become one of the most influential French  philosophers, playwrights, novelists, screenwriters, political activists, biographers, and literary critics of his age. He was one of the key figures in the philosophy of existentialism, and one of the leading figures in 20th century French philosophy as well as Marxism. He also significantly  influenced other scientific disciplines such as sociology, critical theory, post-colonial theory, and literary studies, and still continues to influence these disciplines. “A writer should not allow himself to be turned into an institution” he said as he also refused to accept the Nobel Prize that was awarded to him in 1964. In general he always declined official honors.


Jean-Paul Sartre – The Youth of an Existentialist

Sartre was born in Paris, the son of naval officer Jean-Baptiste Sartre. His father died of yellow fever just 15 months after the birth of his son Jean-Paul, who was raised by his mother and his maternal grandparents, who were related to Albert Schweitzer.[2] In 1917 his mother remarried an engineer, whom he always hated. The family moved to La Rochelle, where he often found his fellow pupils violent and cruel. In 1920 he fell ill, which is why he had to be admitted to Paris as a matter of urgency. His mother also thought it better for his upbringing that he no longer went to school in La Rochelle. From 1921 onwards he attended secondary school at the Henri IV lyceum in Paris, where he met the up-and-coming writer/ essayist Paul Nizan. They would remain close friends until Nizan died in May 1940.

From 1922 to 1924, Sartre went through the preparation (classes préparatoires) for the Lycian Louis-le-Grand for the École normale supérieure (ENS). In 1924 he was admitted to the ENS. There he met, among others, Raymond Aron and later also Simone de Beauvoir. With the former, he would still have to deal with it intellectually; the latter would become his life companion. After an initial exclusion, he was admitted to philosophy studies in 1929. Sartre was a time teacher in French secondary education. He published philosophical essays and developed as a pioneer of French existentialism at the time. Sartre found his ‘fascination’ for existentialist work in the study of Edmund Husserl‘s phenomenology and Martin Heidegger‘s philosophy of existence.[3,4] At the same time he became known to a wide audience through his novel La Nausée (1938), the collection of short stories (Le Mur 1939) and theatre plays (Les Mouches 1943).

A Prisoner of War

In 1940 he ended up in a German prisoner of war, where he wrote a diary of 2000 pages. These were partly lost, but the remainder were published after his death under the title Carnets de la drôle de guerre. He also read in captivity Heidegger’s philosophical masterpiece Sein und Zeit (Being and Time, 1927). In 1941 he was released because of alleged health problems. In Paris he was able to get a job as a philosophy teacher at the Lycée Condorcet, where he took the place of a dismissed Jewish teacher. One of Sartre’s most important themes was existential freedom in a world without higher power that gives meaning or meaning to life. He has to create himself, no matter how difficult that may be. In a concise and abstract way he formulated this as follows: existence precedes the essence. Man is therefore essentially free and cannot shift his responsibility to circumstances, not even in extreme situations.

Man is Bad Being from Birth

Sartre was regarded as a pessimist by some critics. According to Sartre himself, this was not his intention. In a column he wrote for the newspaper Le Monde in the 1950s, he argued that man is a bad being from birth, who can be held responsible for the conflicts in the world. This can be related to the statement of a character from the play Hell is the others (L’enfer, c’est les autres), because the presence of other people inevitably restricts your own freedom. Politically, Sartre was a Marxist of the ‘third way’, with an independent position towards the United States and the Soviet Union. However, when the Cold War hardened and led to the Korean war, among other things, while France became more and more pro-American, in 1952 Sartre sidestepped the Soviet Union, although he never became a member of the then very powerful French Communist Party.

In 1956, Sartres radically changed his attitude towards the communism of the Soviet Union; he rejected the invasion of Hungary. From that year on, he also rejected France’s aspiration to retain Algeria. The Algerian war of independence had been going on for two years. He was personally at risk; his own apartment was twice the target of a bomb attack by the OAS and the French Government was considering arresting him. President Charles de Gaulle, however, rejected this. “You don’t arrest a Voltaire,” he said. When Jean-Paul Sartre was awarded the Nobel Prize for Literature in 1964, he refused, fearing that it would deprive him of his freedom by placing him on a pedestal.

Also he was known for his relationship with feminist philosopher and writer Simone de Beauvoir, whom he first met in 1929 at university. Jean Paul Sartre was dazzlingly intelligent, but was just under 5 feet (1.5 m) tall. Nevertheless, the two became an inseparable couple and Sartre asked her to marry him. One day while they were sitting on a bench outside the Louvre, he said, “Let’s sign a two-year lease“. Near the end of her life, Beauvoir said, “Marriage was impossible. I had no dowry.” So they entered a life-long relationship, but never got married. Together, Sartre and de Beauvoir challenged the cultural and social assumptions and expectations of their upbringings, which they considered bourgeois, in both lifestyle and thought. The conflict between oppressive, spiritually destructive conformity (mauvaise foi, literally, “bad faith”) and an “authentic” way of “being” became the dominant theme of Sartre’s early work, a theme embodied in his principal philosophical work ‘Being and Nothingness‘ (1943).

“Some men are born committed to action: they do not have a choice, they have been thrown on a path, at the end of that path, an act awaits them, their act.”
–Jean-Paul Sartre, The Flies (1943) Act 1

The main idea of Jean-Paul Sartre stated in ‘Being and Nothingness’ is that we are, as humans, “condemned to be free.” This theory relies upon his position that there is no such thing as a creator, and it is illustrated using the example of the paper cutter. Sartre says that if one considered a paper cutter, one would assume that the creator would have had a plan for it: an essence. Sartre said that human beings have no essence before their existence because there is no creator. Thus: “existence precedes essence“, which forms the basis for his assertion that since one cannot explain his own actions and behaviour by referencing any specific human nature, people are necessarily fully responsible for all of their actions. “We are left alone, without excuse“.

His relationship with Beauvoir continued, but had gradually loosened. From 1973 he was practically blind and no longer able to write. Nevertheless, he tried to remain present, among other things with interviews and occasional public appearances. In 1979 he took part in a press conference in favour of the Vietnamese refugees called “Boatpeople”.  Jean Paul Sartre died at the age of 74 at Broussais Hospital in Paris. About 50,000 people were present at his funeral at the Parisian Cimetière du Montparnasse.

Sartre’s ontological approach: Man is the only being where existence (that he is) precedes essence (what he is), but which is not to be understood as temporal order. Reason: There are no basic features that determine his essence (what he should be so that he is actually human). Sartre assumes that there is no God who could have imposed values on man, and no binding ethics outside man. The situation of man is thus characterized by absolute freedom: “I am doomed to be free” or: “Man is the governor of nothing” (Heidegger). Man has to face this basic situation. Everything else would be a self-deception. “There is no nature of man that determines man, but man is what he makes himself”.

From this some statements follow: “Man is fully and completely responsible”, first of all for his individuality: With his actions he “draws his face“. But at the same time for the whole of humanity, because with his decisions he also shows what man can be. In this respect, he is always also a legislator. “Man is fear.” – “Man is abandonment.” – “Man is despair.” – “There is reality only in deed“: Man discovers himself in his design, he transcends himself by designing himself on something. For Sartre, love exists only as a realized relationship, genius only as a realized genius. Existentialism is a humanism, “because we (the existentialists) remind man that there is no other legislator besides him and that he decides about himself in his abandonment; and because we show that not by turning back on himself, but always by searching for a goal outside himself, which is this or that liberation, this or that particular realization – that thereby man will realize himself as a human being“.