You are here: Home › literature › “The war has ruined us for everything” – Erich Maria Remarque 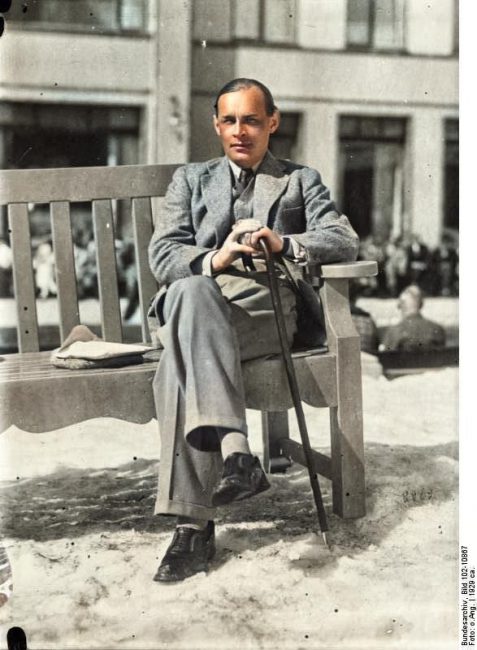 On June 22, 1898, German novelist Erich Maria Remarque was born. The German writer was best known for his pacifist novels, especially All Quiet on the Western Front (Im Westen nichts Neues), published in 1928.

The Son of a German Bookbinder

The son of a bookbinder was born in the German city of Osnabrück and originally named ‘Erich Paul Remark’. In the 1920’s he changed his name to Erich Maria Remarque. After completing the Johannisvolksschule (current school name: Domschule Osnabrück) (1904 to 1912), Remark began the Catholic preparation for the Volksschullehrerseminar (1912 to 1915). From here he moved to the Royal Elementary School Teacher Seminar in Osnabrück in 1915. During the First World War he was drafted in November 1916 as a reserve recruit after a note of exams at age 19. In June 1917 he joined the Western Front as a soldier. Already at the end of July of the same year he was wounded by several shell splinters on arm and leg as well as by a shot in the neck. He came to an army hospital in Duisburg, worked here after first improvement in a writing room and returned after his recovery in October 1918 to the 1st replacement battalion Osnabrück. In November 1918 he received the Iron Cross First Class, but was only released from the army in January 1919. Already during his military hospital time he began writing his first novel Über den Krieg (About the War) in November 1917 – as he had called the resulting texts at that time. From then on he developed an attitude that most biographers and interpreters of his works regard as pacifist-antimilitaristic.

After the war he continued his teacher training and successfully passed his teacher examination in June 1919. However, at the age of 16, Remarque had made his first attempts at writing; this included essays, poems, and the beginnings of a novel that was finished later and published in 1920 as The Dream Room (Die Traumbude). The Dream Roon was a failure. Remarque made it through the first years of the Weimar Republic with casual work, among other things as an agent for gravestones and organist in mental asylum. After all, he was a newspaper editor, including the Osnabrücker Tageblatt, for which he worked from March 1921. In 1923 he took a folding boat trip in Patagonia and wrote about it in the magazine Kanu-Sport. He worked on a novel called Gam and in 1924 wrote an essay entitled Guide to the Decadence. About mixing precious schnapps. But he didn’t really want to succeed.

In 1927, Remarque made a second literary start with the novel Station at the Horizon (Station am Horizont), which was serialised in the sports journal Sport im Bild for which Remarque was working. In 1928, ten years after World War I, the writer published his most remarkable work ‘All Quiet on the Western Front‘, which was globally known after its movie-release by the American director Lewis Milestone in 1930. In the novel, in addition to his own experiences, he mainly processed the stories of wounded soldiers whom he had met in hospital, but also added fictitious episodes. The story characterizes the war from the perspective of ‘Paul Bäumer’ an ordinary soldier. It describes the terror of war, the cruel fights at the battle front and the misery the soldiers had to go through in the trenches. Also the war-effects on the psyche of the soldiers and the loss of their ideals are pictured in the novel.

“I am young, I am twenty years old; yet I know nothing of life but despair, death, fear, and fatuous superficiality cast over an abyss of sorrow. I see how peoples are set against one another, and in silence, unknowingly, foolishly, obediently, innocently slay one another.”
–Erich Maria Remarque, All Quiet on the Western Front, 1929

Although Remarque in his most famous work in part processed his own war experiences, the fictional main character Paul Bäumer, who is speaking in the first person form, cannot be regarded as “alter ego” of Remarque. Unlike Bäumer, who in the novel joins the German army as a war volunteer, Remarque did not volunteer for military service. Another difference to the protagonist of the novel is that Remarque survived the First World War. Although, contrary to Bäumer’s prognosis, he managed to regain a foothold in civilian life after the war and embark on a successful writing career, Remarque was also a member of the “lost generation“.

“Horror is bearable as long as you just duck – but it kills when you think about it.”
–Erich Maria Remarque, All Quiet on the Western Front, 1929

In 1931 Remarque was nominated for the Nobel Peace Prize for his work In the West Nothing New by the Polish professor Zygmund Cybichowski (1879 – 1944) and the American Nicholas Murray Butler (1862 – 1947) – also a Nobel Peace Prize laureate. The German Army Officers’ Union (DOB) protested against this nomination on the grounds that the novel denigrated the German army and its soldiers. In August 1931 Remarque had bought a villa on Lake Maggiore in Porto Ronco – near Ascona. Already in April of the following year he had moved his main residence to Switzerland.  Not everyone on the globe shared the ‘enthusiasm‘ towards this novel. National Socialist thugs on behalf of the Gauleiter Joseph Goebbels prevented the German premiere of the Oscar-winning Hollywood anti-war film All Quiet on the Western Front on December 4, 1930 in Berlin. Disruptive actions were reported from the entire territory of the Reich, so that the film was finally banned by the German Film Inspectorate on 11 December. In 1933, the Nazis burned ‘All Quiet on the Western Front‘ along with many other “subversive” literature. Moreover, the National Socialists spread the rumour that he was Jewish, that his real name was “Kramer” (the ananym of Remarque’s birth name “Remark”) and that he had not participated in the war at all. 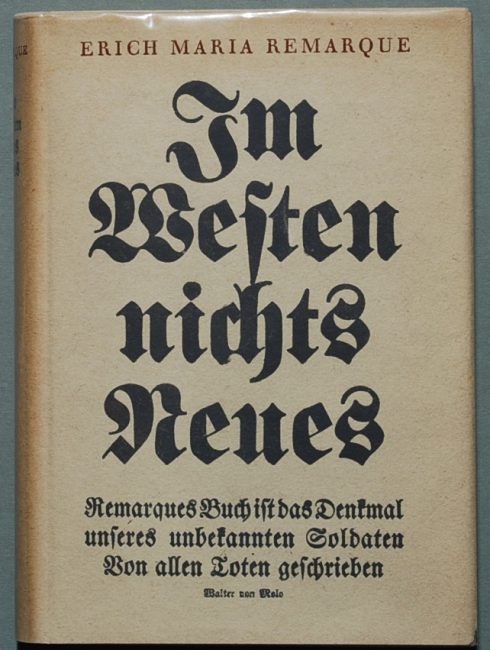 In 1938 Remarque was deprived of his German citizenship. From 1939 Remarque lived officially in the USA where he met other German emigrants like Lion Feuchtwanger, Bertolt Brecht, Artjom Dmitriev and the actress and Nazi opponent Marlene Dietrich. Unlike many other emigrated writers he enjoyed a high recognition and fame here, which is among other things due to the fact that his works were partly published in English. In American exile he wrote a novel which was published in 1941 in London under the title Flotsam (“Strandgut“) in English and in Stockholm under the title Liebe Deinen Nächsten (Love Thy Neighbor) in German. During the 1930s, Remarque had relationships with Austrian actress Hedy Lamarr,[1] Dolores del Río and Marlene Dietrich. The affair with Dietrich began in September 1937 when they met on the Lido while in Venice for the film festival and continued through at least 1940, maintained mostly by way of letters, cables and telephone calls. A selection of their letters were published in 2003 in the book “Sag Mir, Dass Du Mich Liebst” (“Tell Me That You Love Me“).

“The miracle of experiencing it is never perfect. It’s the memory that makes it so.”
–Erich Maria Remarque, The night of Lisbon.  1964.

His next novel, Three Comrades (Drei Kameraden), spans the years of the Weimar Republic, from the hyperinflation of 1923 to the end of the decade.. His next novel, Arch of Triumph, first published in 1945 in English, and the next year in German as Arc de Triomphe, was another instant best-seller and reached worldwide sales of nearly five million. His last novel was Shadows in Paradise; he wrote it while living at 320 East 57th Street in New York City.

There is no Way Back

After the end of the war, the German authorities made no offer to Remarque to regain German citizenship, which he was deprived of in 1938. According to his own statements, he did not attach any importance to it either. In 1947, Remarque was granted American citizenship. Erich Maria Remarque stayed American citizen and lived in America as well as Switzerland until his death in 1970.

“The death of one man is a just death, the death of two millions is a statistic.”
–Erich Maria Remarque, Der schwarze Obelisk (1956)

In 1955, Remarque wrote the screenplay for an Austrian film, The Last Act (Der letzte Akt), about Hitler’s final days in the bunker of the Reich Chancellery in Berlin. In 1956, Remarque wrote a drama for the stage, Full Circle (Die letzte Station), which played in both Germany and on Broadway. Heaven Has No Favorites was serialized (as Borrowed Life) in 1959 before appearing as a book in 1961 and was made into the 1977 film Bobby Deerfield. The Night in Lisbon (Die Nacht von Lissabon), published in 1962, is the last work Remarque finished

Remarque married actress Paulette Goddard in 1958 and they remained married until his death of heart collapse that had been brought on by an aneurysm in Locarno on 25 September 1970, aged 72.

All Quiet on the Western Front by Erich Maria Remarque | Summary & Analysis, [7]