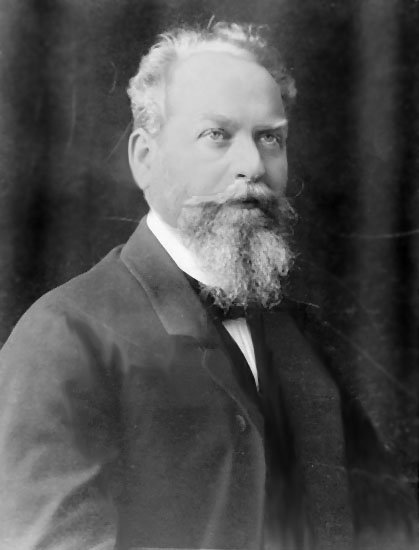 On April 8, 1859, German philosopher and mathematician Edmund Gustav Albrecht Husserl was born. He is best know as the founder of the 20th century philosophical school of phenomenology, where he broke with the positivist orientation of the science and philosophy of his day, yet he elaborated critiques of historicism and of psychologism in logic.

“First, anyone who seriously intends to become a philosopher must “once in his life” withdraw into himself and attempt, within himself, to overthrow and build anew all the sciences that, up to then, he has been accepting.”
– Edmund Husserl, Cartesian Meditations (1931). Méditations cartésiennes

Edmund Husserl was born in 1859 in Prostejov, Moravia, as the second son of a Jewish cloth merchant family belonging to the German-speaking middle class. This town belonged to the Austro-Hungarian Empire at the time and is now in the Czech Republic. Subsequently he attended the grammar school in Olomouc, where he graduated in 1876. He studied astronomy in Leipzig, but also attended several lectures in mathematics, physics and philosophy. He attended the lectures of the philosopher Wilhelm Wundt,[8] one of the founders of modern, scientifically oriented psychology. Wundt took a holistic approach to science, combining perspectives from the natural sciences and the humanities. At first, however, philosophy remained Husserl’s sideline.

Husserl first moved to Berlin in 1878 to continue his mathematics studies under Leopold Kronecker and Karl Weierstraß at the Friedrich Wilhelm University (now Humboldt University). There he attended the philosophy lectures of Friedrich Paulsen. In 1881 he moved to the University of Vienna to complete his mathematics studies under the direction of a former student of Karl Weierstraß, Leo Königsberger. He received his doctorate in 1883 with his mathematical work Beiträge zur Theorie der Variationsrechnung (Contributions to the theory of the calculus of variations). Especially Franz Brentano had a great influence on the scientist. Together, they studied logic and psychology, and Brentano suggested Husserl to finish his habilitation dissertation with Carl Stumpf in Halle.

When Husserl published his first monograph, the ‘Philosophy of Arithmetic‘, based on his dissertation, he combined his mathematical, psychological and philosophical knowledge in order to lay the foundations for arithmetic in psychology. However, it was Gottlob Frege, a founder of modern logic,[4] who criticized Husserl’s work for its underlying psychologism. Therefore Husserl began developing the philosophical method of phenomenology.

At the very beginning of the 1900’s, he published his first work on the subject, ‘Logical Investigations‘ consisting of two volumes. In the work, Husserl attacked psychologism in general and explained “descriptive-psychological” and “epistemological” investigations. The work is credited with making continental philosophy possible and it depicted a significant foundation of phenomenology, going beyond systems like psychologism, formalism or realism.

“A new fundamental science, pure phenomenology, has developed within philosophy: This is a science of a thoroughly new type and endless scope. It is inferior in methodological rigor to none of the modern sciences. All philosophical disciplines are rooted in pure phenomenology, through whose development, and through it alone, they obtain their proper force.”
– Edmund Husserl, Pure Phenomenology, 1917

In the following years, Edmund Husserl improved and modified his phenomenology methods and published his second major work in this field, ‘Ideas‘ in 1913 while working at the University of Göttingen. In Göttingen, Husserl presumably experienced his most productive years, developing the transcendental-phenomenological method, the phenomenological structure of time-consciousness and many more. Those were critically important for later publications, such as ‘The Crisis of European Sciences and Transcendental Phenomenology‘ and ‘Experience and Judgement‘.

The Three Layers of Logic

The Crisis of Science

In his late work, Husserl criticized that modern sciences, with their claim to grasp the world objectivistically, no longer answer people’s questions about the meaning of life. He therefore called on the sciences to remember that they themselves owe their origins to the human world. For Husserl, the lifeworld, as a central concept, is the pre-theoretical and still unquestioned world of the natural attitude: the world in which we live, think, act and create. Husserl’s transcendental phenomenology attempts to reduce the resulting alienation between humans and the world.

In his last active working years, Edmund Husserl gave lectures across Europe on phenomenology. After his passing on April 27, 1938, over 40000 pages of manuscripts have been found and depicted the foundation for the first Husserl archive, established in 1939.

Husserl’s influence on European universities was enormous. He was invited to numerous talks and many institutions adapted his theories quickly. He was known as a fascinating teacher and scientist with Martin Heidegger as his most famous student.[5] He dedicated his work ‘Being and Time‘ to his former teacher even though the two scientists often had a difficult relationship due to Heidegger’s affiliation for the Nazi Party in Germany. Husserl influenced many younger scientists in concerns of their publications and methods. Jean-Paul Sartre also admired Husserl’s work, but rejected the transcendental theories and decided to rather follow Heideggers ontologies. Further admirers of Edmund Husserl were Kurt Gödel, Wilfrid Sellars, Jacques Derrida and many more.