You are here: Home › physics › Jack Kilby – Inventor of the Integrated Circuit 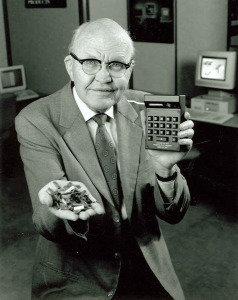 On June 20, 2005, physicist and inventor Jack St. Clair Kilby passed away. He was best known for creating the integrated circuit, the basis of almost all electronic devices operating today.

“I’ve reached the age where young people frequently ask for my advice. All I can really say is that electronics is a fascinating field that I continue to find fulfilling. The field is still growing rapidly, and the opportunities that are ahead are at least as great as they were when I graduated from college. My advice is to get involved and get started.”
— Jack Kilby, from his autobiography. The Nobel Prizes 2000, Editor Tore Frängsmyr, Nobel Foundation, Stockholm, 2001

Kilby was born in Jefferson City, Missouri. He spent most of his early years at Great Bend in Kansas, where he also finished high school. He received his Bachelor of Science degree in Electrical Engineering from the University of Illinois at Urbana-Champaign in 1947. He earned his master’s degree from the University of Wisconsin in 1950 while working at Milwaukee for Centralab, part of Globe Union Inc.

The Tyranny of Numbers

In 1958 he started working at Texas Instruments, where he did not have a summer vacation as a newcomer. He had the lab to himself and his thoughts, trying to find solutions for a problem in circuit design typical for the 1960’s, ‘the tyranny of numbers‘. The term first used by Bell Labs in the late 1950’s depicts the inability of increasing performance due to a large number of elements. On September 12, 1958, he presented the first example of a working circuit on a semiconductor. Not much more than a piece of germanium with some cables on a piece of glass, about the size of a paper clip, was all that could be seen first. When Kilby pressed a switch, an endless sine wave appeared on the oscilloscope. This showed those present, including the head of Texas Instruments, Mark Shepherd, that the problem had been solved. On February 6, 1959, patent US 3,138,743 was filed for the first integrated circuit.1] The prototype has been preserved and is privately owned.

First Not a Commercial Success

Initially, integrated circuits were not commercially successful, but Kilby first used them to build calculators in 1966. From then on, the technical development towards ever smaller and more powerful “chips” astonished and delighted even Kilby.

Robert Noyce and his work on ICs

But Jack Kilby was not the only one working on the integrated circuit. Robert Noyce, co-founder of the Fairchild Semiconductor Corporation in California, was researching on the same issues as Kilby and today counts along with Jack Kilby as the inventor of the IC.[7] They both never considered each other as foes, even more did their companies and went through many years of legal battles. In the end, Fairchild Semiconductor was the first company to release integrated circuits on the market and also Texas Instruments increased its success with the IC by selling ICs to the Air Force.

From Texas Instruments to Texas University

From 1958 to 1970 he worked at Texas Instruments and was then on leave to continue his work as an independent inventor. From 1978 to 1984 he was Professor of Electrical Engineering at Texas A&M University.

The Nobel Prize for Physics

In 2000, together with the German-American Herbert Kroemer and the Russian Zhores I. Alferov, he received the Nobel Prize in Physics for his contribution to the development of the integrated circuit (IC). During his life he patented 60 of his inventions and is also regarded as the inventor of the pocket calculator and the thermal printer. In his last years he was occupied with solar energy technology.

At yovisto academic video search, you can watch the story of Jack Kilby and his influence in society through his famous inventions.