You are here: Home › medical science › Albert Schweitzer and his Hospital in Africa 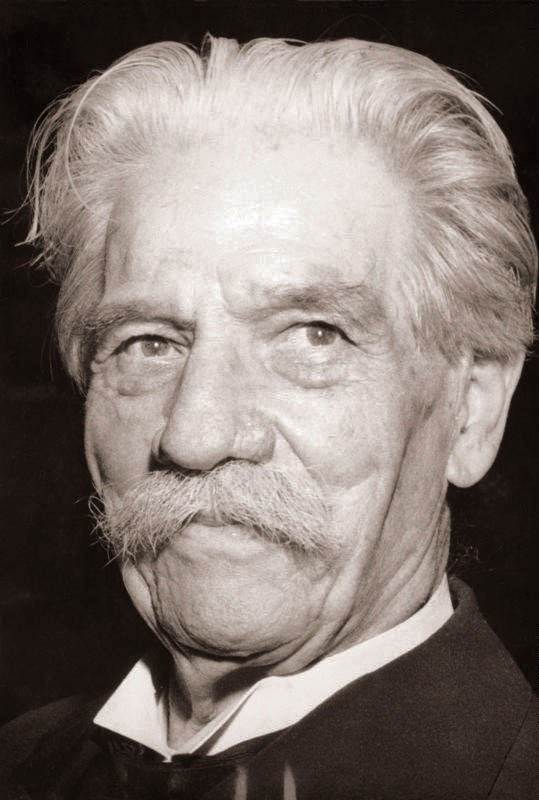 On March 21, 1913, theologian, organist, philosopher, physician, and medical missionary in Africa Albert Schweitzer together with his wife Helene start their voyage to Africa, to establish a hospital in Equatorial Africa.

“The awareness that we are all human beings together has become lost in war and through politics.”
– Albert Schweitzer, Radio appeal for peace, Oslo, Norway (30 March 1958)

Albert Schweitzer was born on January 14, 1875, as the second child of a Lutheran-Evangelical priest’s family in Kaysersberg, Alsace-Lorraine, Germany (now Haut-Rhin, France). Some months after his birth the family moved to Guensbach, Alsace, where Albert’s father worked as a priest until his death. Albert attended elementary school there, followed by secondary school in Muenster and college in Muehlhausen. On June 18, 1893 he made his A-levels there. As a child he received a very good musical education which became the basis for his later magnificent organ playing. He later went on to become the world’s leading expert on organ building.

In 1893, Schweitzer played for the French organist Charles-Marie Widor in Paris, for whom Johann Sebastian Bach’s organ-music contained a mystic sense of the eternal. Widor, deeply impressed, agreed to teach Schweitzer without fee, and a great and influential friendship was begun. Also from 1893 he studied Protestant theology and philosophy at the Kaiser Wilhelm Universität of Straßburg and completed his theology degree in 1899 and published his PhD thesis at the University of Tübingen. His studies also took him to the Sorbonne and the University of Berlin

“The disastrous feature of our civilization is that it is far more developed materially than spiritually. Its balance is disturbed”
– Albert Schweitzer, Kulturphilosophie (1923)

Schweitzer rapidly gained prominence as a musical scholar and organist, dedicated also to the rescue, restoration and study of historic pipe organs. With theological insight, he interpreted the use of pictorial and symbolical representation in J. S. Bach‘s religious music.[3] In 1902 Schweitzer qualified as university lecturer in theology in Strasbourg where he afterwards worked as a private teacher. From 1903 to 1906 he was head of the monastery St. Thomas in Strasbourg. Along the way, Schweitzer published several books on theology, including the most famous, The Quest for the Historical Jesus, as well as books on Immanuel Kant,[4] perhaps the definitive biography of Johann Sebastian Bach, books on organ building, and others.

Towards Direct Service to Humanity

Schweitzer had always felt a strong yearning towards direct service to humanity. In 1905, at the age of 30, he decided to study medicine; he wanted to become a mission doctor. In November 1911 he finished his studies successfully and in June 1912 he married Helene Bresslau. In February 1913 he graduated from university receiving his degree with a specialization in tropical medicine and surgery at the age of 38. Shortly after that he went to Africa with his wife to the small jungle place called Lambaréné, French Equatorial Africa (now in Gabon), and built there a tropical hospital with a station for Hansen’s disease which he paid for on his own. On departure for Lambaréné in he was presented with a pedal piano, a piano with pedal attachments built especially for the tropics. It was Schweitzer’s aim to alleviate the illness and misery of the people living there. The hospital was financed by donations and Schweitzer’s publications, speeches and organ concerts in Europe. In 1917-1918 Schweitzer, as a German national, was interned in France but wrote, during this period, two volumes of a projected philosophical study of civilization, The Decay and the Restoration of Civilization and Civilization and Ethics. There, Schweitzer contended that modern civilization is in decay because it lacks the will to love. He suggested that people should develop a philosophy based on what he termed “reverence for life,” embracing with compassion all forms of life.

Only in 1924 was he able to return to Lambaréné. In spite of many obstacles, Schweitzer decided to rebuild a new, bigger hospital because the old one was too small and equipped it to provide care for thousands of Africans, including 300 lepers. In this hospital Schweitzer worked, except for a few interruptions, until his death in 1965. In 1952 he received the Nobel Peace Prize to add to such other recognitions as the Goethe prize of Frankfurt and numerous honorary doctorates awarded by Universities.