You are here: Home › biology › Jean-Henri Fabre – The Virgil of Insects 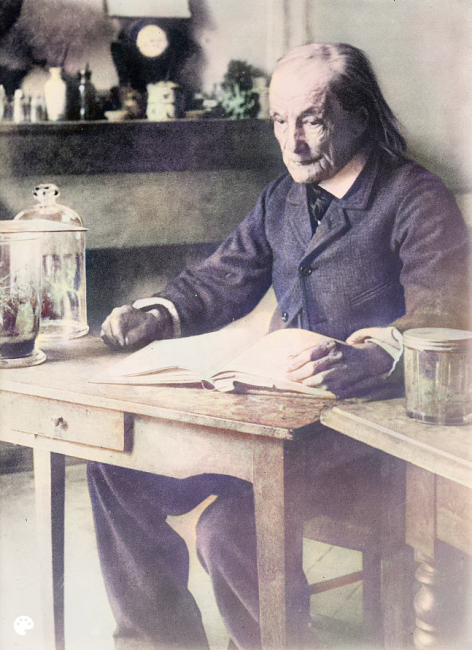 On December 22, 1821, French entomologist Jean-Henri Fabre was born. Being a prolific author, his greatest achievement lies in the polularization of insect natural history. Victor Hugo dubbed him “the insects’ Homer” and Edmond Rostand named him the “Virgil of insects.” Darwin cited him as “an incomparable observer.”

“Book-knowledge is a poor resource … In many cases, ignorance is a good thing: the mind retains its freedom of investigation and does not stray along roads that lead nowhither, suggested by one’s reading. … Ignorance can have its advantages; the new is found far from the beaten track.”
— Jean Henri Fabre, The Life and Love of the Insect (1918), 243.

Jean-Henri Casimir Fabre was born in Saint Léons in Aveyron, France. He spent the first years of his youth at Le Malaval, very close to his native village, with his grandparents. From his youth he was attracted by the beauty of butterflies and grasshoppers. Jean-Henry’s education was quite disjoined due to the frequent moves of the whole family from one city to another. Fabre was largely an autodidact, owing to the poverty of his family. Nevertheless, he acquired a primary teaching certificate at the young age of 19 and began teaching in Carpentras whilst pursuing further studies. In 1849 he was appointed to a teaching post as professor of physics at Ajaccio (Corsica), then in 1853 moved on to the lycée in Avignon.

“I have made it a rule to adopt the method of ignorance in my investigations into instincts. I read very little. … I know nothing. So much the better : my queries will be all the freer, now in this direction, now in the opposite, according to the lights obtained.”
(Jean-Henri Fabre in ‘The Languedocian Scorpion’)

The Birth of Modern Entomology

Fabre was a popular teacher, physicist, chemist and botanist. Famous botanists Requien of Avignon and Moquin-Tandon helped him to advance his scientific knowledge. However, he is probably best known for his findings in the field of entomology, the study of insects, and is considered by many to be the father of modern entomology. Fabre was mostly a self-educated entomologist with very little scientific background. Much of his enduring popularity is due to his marvelous teaching ability and his manner of writing about the lives of insects in biographical form, which he preferred to a clinically detached, journalistic mode of recording. In doing so he combined what he called “my passion for scientific truth” with keen observations and an engaging, colloquial style of writing. Fabre wrote:

Others again have reproached me with my style, which has not the solemnity, nay, better, the dryness of the schools. They fear lest a page that is read without fatigue should not always be the expression of the truth. Were I to take their word for it, we are profound only on condition of being obscure.

However, he was an acute observer of insects’ life, which resulted in lots of prominent experiments and discoveries. Most entomologists now agree that Jean-Henri Fabre’s role in popularization of this science about insects can not be overestimated. [2] His Souvenirs Entomologiques is a series of texts on insects and arachnids. In volumes 5 and 6 of the Souvenirs, Fabre detailed the behavior and life history of local species of Copris, Scarabaeus (Scarabaeinae), and Geotrupes (Geotrupidae). In volume 8 he followed the life history of species of Cetonia, Oxythrea, and Protaetia (Cetoniinae). [4] Fabre did important research on the insect orders Hymenoptera (e.g., bees and wasps), Coleoptera (e.g., beetles), and Orthoptera (e.g., grasshoppers, crickets). Based on his observations of the paralyzing actions of wasps in response to stimulating zones in their prey, he described the importance of inherited instinct as a behavior pattern in insects. [3] Fabre influenced the later writings of Charles Darwin,[5,6] who called Fabre “an inimitable observer“. Fabre, however, was a Christian who remained sceptical about Darwin’s theory of evolution, as he always held back from all theories and systems. His special force was exact and detailed observation, field research, always avoiding premature general conclusions from his observations.

In one of Fabre’s most famous experiments, he arranged Pine Processionary caterpillars to form a continuous loop around the edge of a pot. As each caterpillar instinctively followed the silken trail of the caterpillars in front of it, the group moved around in a circle for seven days. Fabre was 84 when the last volume of Souvenirs Entomologiques appeared, and soon afterward he was “discovered.” He was elected to numerous scientific societies, provided a government pension, and even the President of France came to visit him.[4] Fabre published numerous books with which he tried to introduce scientific and other subjects – chemistry, botany, arithmetic, astronomy, algebra, trigonometry, agriculture, etc. – in a popular way, especially to young people. He was so successful that he was able to make a living from his publications. Although he benefited from the general upswing in education, he owed his breakthrough above all to his special pedagogical talent. His ability to present complicated facts and processes in an exciting, easy-to-read form is particularly evident in the Souvenirs Entomologiques. In 1912, Fabre was nominated for the Nobel Prize for Literature. However, that year the Swedish Academy awarded the prize to the German poet and dramatist Gerhart Hauptmann. He had been a corresponding member of the Académie des sciences in Paris since 1887.