You are here: Home › politics › Pjotr Kropotkin and the Theory of Mutual Aid 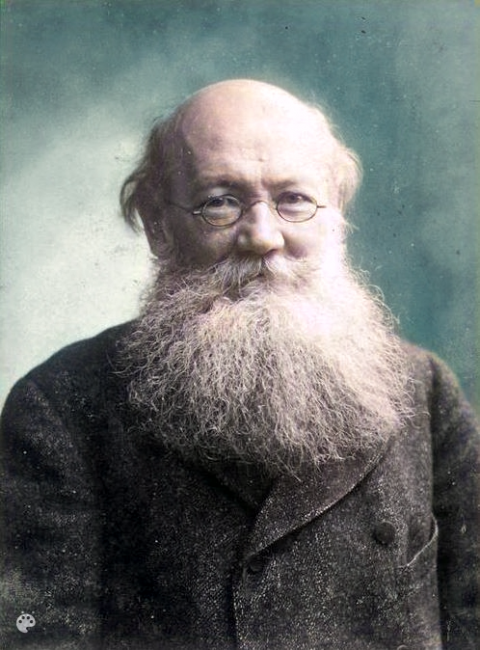 On December 21, 1842 (or December 8, according to the Gregorian Calendar), Russian geographer, economist, activist, philologist, zoologist, evolutionary theorist, philosopher, writer and prominent anarchist Prince Pyotr Alexeyevich Kropotkin was born. Besides being a political person, his main scientific contribution is the publication of his theory of mutual aid, voluntary reciprocal exchange of resources and services for mutual benefit as a counter model to the historic concept of an autonomous individual, the so-called Social Darwinism.

“The history of human thought recalls the swinging of a pendulum which takes centuries to swing. After a long period of slumber comes a moment of awakening. “
– Pyotr Kropotkin, Anarchist Morality (1890)

Pyotr Kropotkin was born in Moscow in 1842, the son of Prince Alexei Petrovich Kropotkin, into a family of the highest order of Russian aristocracy. His mother was the daughter of a general in the Russian army and had comparatively liberal views for her time and a keen interest in literature. However, she died of tuberculosis when Kropotkin was just four years old. His childhood was further shaped by his authoritarian father and stepmother, who dealt with her stepchildren in a very strict and distant manner. In addition, however, he was extensively taught by various private tutors who, among other things, introduced him to the critical Russian literature of Gogol and Pushkin as well as to French history and literature. Under this influence, Pyotr Kropotkin made early attempts in the literary field and wrote stories, journalistic articles and also poems.

At the age of fifteen, the contemplative life in the familiar circle ended with the entry into the St. Petersburg page corps. The school was considered a training ground where the Russian high nobility prepared their children for future careers in the military and administration. Kropotkin, however, largely followed his own broad interests. He was deeply involved with the French encyclopedists and French history, especially the French Revolution. He was interested in the liberal and republican tendencies that arose among the Russian upper classes, especially in the period following the death of Tsar Nicholas I in 1855. After the abolition of serfdom by the successor Tsar Alexander II in 1862, Kropotkin finished his training in the page corps as one of the best of his class

After joining the Imperial Russian Army, Kropotkin had himself transferred to a Siberian Cossack regiment in the newly conquered Amur region, which was extremely unusual for his social class. Kropotkin made the decision against his father’s will. He hoped to escape the reactionary atmosphere of St. Petersburg and pursue his own geographical interests. Pyotr Kropotkin was commissioned by the administration in St. Petersburg to write a report on the prison and penal camp system in Siberia and another report on local self-government in the province of Transbaikalia, where he developed comprehensive reform ideas and proposed solutions. However, the reports went largely unnoticed in the reactionary atmosphere following the suppression of the Polish Uprising of 1863. He was first introduced to the ideas of anarchism through the exiled radical writer Mikhail Larionovich Mikhailov and became a socialist through the works of Pierre-Joseph Proudhon – especially the System of Economic Contradictions.

Disappointed by the failed reform projects, Kropotkin then led extensive research trips into unknown parts of eastern Siberia. He undertook five major expeditions and other smaller trips in Transbaikalia and the Amur region as far as neighboring China. His first scientific paper, a treatise for the Siberian Geographical Society, was later used in the planning of the Trans-Manchurian Railway. His expeditions provided many new insights and formed the basis for his geographical theories about northeastern Asia. He wrote in his memoirs about his experiences in Siberia:

“The five years I spent in Siberia were for me an education in real life and human character. […] I had ample opportunity to observe the peasants, their way of life and habits, in daily life, and still more opportunities to realize how little the state administration, even if animated by the best intentions, was able to offer them.”
– Pyotr Kropotkin: Memoirs of a Revolutionary.

In 1867, Kropotkin returned to St. Petersburg and resigned from the military in disillusionment. He enrolled at St. Petersburg University to study mathematics and physics, and earned his living by translating the works of Herbert Spencer. At the same time, Kropotkin became secretary of the Section of Physical Geography in the Russian Geographical Society. In the role of secretary, he still had enough time to advance his own research, and he also benefited from the experience of many expedition reports sent to him by other researchers for the Geographical Society. Pyotr Kropotkin developed two other more important contributions to geographic research: his new glacier theories and another theory on desiccation and lake formation. On the new glacier theories, Kropotkin wrote two volumes, the first of which was published in 1876 and initiated a debate on the validity of the glacier theories of the time.

In 1872, Pyotr Kropotkin’s father Alexei Petrovich died. The inheritance enabled Pyotr Kropotkin to fulfill his long-cherished dream of traveling to Western Europe.[3] He then traveled to Switzerland that same year and quickly became acquainted with Russian socialist students in Zurich. Upon his return to Russia, he joined the Tchaikovsky Circle, whose members were primarily concerned with popular education and propaganda. Kropotkin was arrested in 1874 after being betrayed by one of the participants in his secret discussion circles for workers. Kropotkin’s arrest caused a great stir among the public and also unsettled the tsar and his entourage, since Kropotkin was the first time that a high-ranking nobleman and personal servant of the tsar had participated in the anti-tsarist movement. Kropotkin was detained in the Peter and Paul Fortress in St. Petersburg and fell ill with rheumatism and scurvy due to the poor prison conditions. After two years, when his condition deteriorated to life-threatening levels, he was transferred to a smaller prison near the St. Petersburg Military Hospital to recuperate. Kropotkin’s health improved rapidly again there. A short time later, with the help of twenty assistants, he made a spectacular escape from prison. After fleeing in 1876, Kropotkin lived for the time being in Edinburgh and then went on to London to work for the scientific journal Nature. Still in December 1876, he decided to continue his journey to the Swiss Jura region, since he found no satisfactory field of activity in the weak English workers’ movement. In the ideological center of European anarchism at that time, he began a lively activity, and he transformed himself into a communist anarchist during this period. 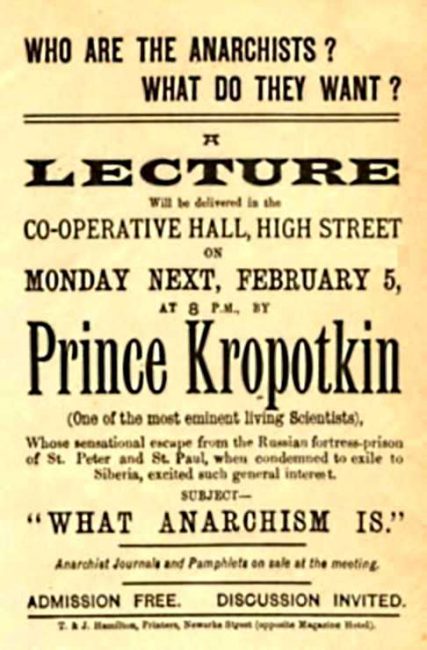 A leaflet promoting a lecture of Peter Kropotkin (c 1900)

Assasination of the Tsar

After the assassination of Tsar Alexander II on 1 Jul/13 March 1881greg. and the brutal execution of those responsible – among them Sophia Perovskaya from the Tchaikovsky circle – Kropotkin organized a protest meeting and circulated a pamphlet La vérité sur les exécutions en Russie (Engl.: The truth about executions in Russia). Although he found himself in a difficult financial situation due to the publication of his own journal, Kropotkin was able to attend the 1881 anarchist congress in London with the help of friends. After his return to Switzerland, Kropotkin was expelled under pressure from the Russian government and from then on lived in the French town of Thonon-les-Bains on Lake Geneva.

Words of a Rebel

Toward the end of 1882, strikers in Montceau-les-Mines, France, carried out a series of small dynamite attacks. Since Kropotkin returned to Thonon in the fall of 1882 and this intersected with the attacks, he was seen by much of the French press as partly responsible. Kropotkin, who had nothing to do with the incidents, was arrested after a few weeks with about 60 other anarchists. The prosecution was unable to produce any evidence in court, but the defendants were nevertheless convicted for their membership in the International, even though the International had not existed for five years. Kropotkin was punished most severely with five years imprisonment and 1000 francs fine, but the French public and the vast majority of the French press condemned the trial. While imprisoned in Lyon and Clairvaux, Kropotkin was able to continue his literary activity, and from his collected works from Le Révolté, Élisée Reclus compiled the book Paroles d’un révolté (Eng: Words of a Rebel), which was published in Paris in 1885. Kropotkin contracted malaria in prison and scurvy another time. Meanwhile, public opposition to Kropotkin’s unjust imprisonment was forming, joined by many renowned British and French scholars, including, for example, Alfred Russel Wallace and Victor Hugo, who petitioned the French government for his release. The government gave in to public pressure in January 1886 and released Kropotkin and the rest of the convicts.

After the outbreak of World War I, Kropotkin openly advocated anarchist participation on the side of the Entente powers against the German Reich. However, along with Jean Grave, Varlaam Cherkessov, and several other anarchists, he found himself isolated within the anarchist movement as a result, since the vast majority were anti-militarist. Kropotkin advocated anarchist participation in the war in the journal Freedom during the war, until Freedom continued as an anti-war journal after a conflict with Kropotkin and stopped publishing his articles. The open break between the majority of the anarchist movement and Kropotkin came after the publication of the Manifesto of the Sixteen, in which he and fourteen other anarchists called for a common struggle against Germany. In June 1917, Kropotkin returned to Russia after the February Revolution and was enthusiastically received by some 60,000 people in St. Petersburg. He made a plea in Russia to continue the Russian effort in the First World War. The appeal, however, fell almost flat among the war-weary Russian population and led the majority of anarchists in Russia to turn against Kropotkin as well. After the Bolsheviks seized power in the October Revolution, persecution of political opponents began, and the anarchists were particularly hard hit. Kropotkin, however, due to his influence and popularity among the Russian population, remained unmolested and was able to live a relatively free life. Weakened by pneumonia, Kropotkin died on February 8, 1921. Representatives of various anarchist groups, including Alexander Berkman and Emma Goldman, formed a funeral committee and were able to obtain from the Soviet authorities, in part, the release of imprisoned Russian anarchists on the condition that they return to prison after the funeral. Several tens of thousands of people attended the funeral on February 13, 1921, making it the last major demonstration of anarchist forces in Soviet Russia.

During his life, Kropotkin wrote numerous works on critique of capitalism, on competition, and also on mutual aid. his famous work Mutual Aid: A Factor of Evolution was written by Kropotkin during his exile in England and first published in 1902 although individual chapters had been published a few years earlier in the British magazine Nineteenth Century. In it, he wrote about his experiences during his scientific expeditions in Siberia and is considered a response to social Darwinism and in particular to Thomas H. Huxley‘s Nineteenth Century essay, “The Struggle for Existence“. Kropotkin examines the evidence of cooperation in non-human animals and draws the line to humans in different time periods up to the modern world. He comes to the conclusion, that cooperation and mutual aid are critical factors in the evolution of species and the chance to survive. [2]