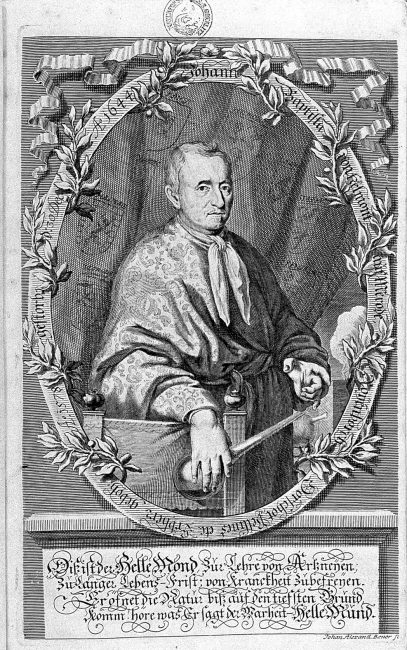 On January 12, 1580, Flemish chemist, physiologist, and physician Jan Baptist van Helmont was born. Can Helmont worked during the years just after Paracelsus and is sometimes considered to be “the founder of pneumatic chemistry“. Van Helmont is remembered today largely for his ideas on spontaneous generation and his introduction of the word “gas” (from the Greek word chaos) into the vocabulary of scientists.

“I praise my bountiful God, who hath called me into the Art of the fire, out of the dregs of other professions. For truly Chymistry… prepares the understanding to pierce the secrets of nature, and causeth a further searching out in nature, than all other Sciences being put together: and it pierceth even unto the utmost of real truth.”
– Jan Baptist van Helmont [13]

Jan Baptist van Helmont was born in Brussels, Spanish Netherlands (present-day Belgium), as a member of the nobler families. His father, Christiaen van Helmont, was a public prosecutor. His inheritance (his father died in 1580) and the income from his wife’s fiefs made him financially independent throughout his life. Helmont studied philosophy, theology, natural history and medicine in a Jesuit seminary in Leuven and received his doctorate in 1599. At the age of 17 he was already a teacher. In the early 17th century, Helmont traveled through Europe, especially England, France, Italy, and Switzerland. In 1605 he returned first to Amsterdam and practiced medicine during a plague epidemic. In 1606 he settled as a doctor and natural scientist on his estate Vilvoorde near Brussels. There he carried out chemical and physiological experiments in his private laboratory. Instead of accepting the Jesuits’ offer to enter into ecclesiastical service, he married Margarite van Ranst in 1609 and thus received the title Lord. He also rejected a call from Emperor Rudolf II. Van Helmont dealt with the works of Galenus, Hippocrates, Avicenna and Paracelsus.[9,10] He was a follower of Paracelsus and regarded him as his model, whereas he rejected galenic medicine and, on the basis of his own research, arrived at results that contradicted the traditional concept of humoral pathology.

The sources on Jan Baptist van Helmont differ. Often, the scientist is credited with the idea of the pot experiment to test if plants obtained their mass from the soil. The subject of Helmont’s experiment was the transplantation of a willow shoot weighing five pounds. Since the time of ancient Greek natural philosophy, it was assumed that all matter consisted of four elements: earth, water, fire and air. With the willow shoot, van Helmont wanted to prove that only air and water were elementary matter. He took the shoot from nature, removed the earth from its roots and weighed it. He then planted it in a pot full of weighed earth. The tree was then regularly watered with water, otherwise nothing was added. Five years after planting the willow, he pulled it out of the soil of the pot and weighed both a second time. From the earth only 2 ounces had been lost in this time, the tree however was 169 pounds and 3 ounces heavy. From this Van Helmont drew the reasonable conclusion: “164 pounds of wood, bark and roots originated from water alone“. Only later did research by other scholars show that plants also need air (especially the carbon dioxide it contains), light and – in much smaller quantities – substances from the soil to grow. However, many historians assume that Helmont’s experiment was mostly inspired by the work of Nicolas of Cusa and his book ‘De Staticus Experimentis‘ in which a similar thought experiment is described [5].

Further, van Helmont is often referred to as the founder of pneumatic chemistry. He described several sources of gas sylvestre, his term for carbon dioxide, including belches, fermenting wine and burning charcoal, which is of plant origin. It is believed that Helmont was well aware of the fact that burning dry plant matter released large amounts of carbon dioxide. As David Hershey puts it, Helmont was unfortunately not able to conclude from his data that “fresh plant matter consisted largely of water but that dry plant matter consisted mainly of carbon dioxide gas  and a small amount of soil minerals . That kind of conclusion would have advanced plant biology by well over a century.”[11]

Jan Baptist van Helmont became the founder of iatrochemistry with Christian-mythic traits, which he opposed to iatromechanics. He described all life processes as chemical processes, which he called “fermentation” and attributed to “gaseous ferments”. In 1644 he was the first to synthesise sulphuric copper oxide ammonia (Cuprum sulphuricum ammoniatum, Kupriammonium sulphate). Van Helmont was responsible for the discovery of coal gases in the early days of modern chemistry. He discovered a “wild spirit” which emanated from heated wood and coal, and in his book “Origins of Medicine” (1609) called it “gas” (derived from chaos, spirit, gauze, blowing, …).

House Arrest and Ban on Publication

Jan Baptist van Helmont closely followed the controversy between the Marburg professor Rudolf Goclenius the Younger and the Belgian Jesuit Jean Roberti. In 1617 the latter had rejected the healing method of magnetic wound healing with the “sympathetic powder” published by Goclenius in 1608. A manuscript by van Helmont with extensive support of the point of view of the Protestant professor was published against his will by Roberti. His ideas brought him into conflict with the Roman Catholic Church. In 1625 the Spanish Inquisition (responsible for the Spanish Netherlands) condemned 27 statements as heresy, presumptuous arrogance, proximity to Lutheran and Calvinist doctrine. The University of Leuven rejected his teachings because they were inspired by Paracelsus. From 1633 to 1636 he was under house arrest. The persecutions by the church did not end until 1642, when he received the imprimatur for a treatise on fever. Therefore he could not publish between 1624 and 1642, until shortly before his death. Full rehabilitation did not take place until 1646 after his death.

During his lifetime, Jan Baptiste van Helmont was known as both, “hero and fool” because his “combination of mysticism, magic, alchemy, and new science irritated even his contemporaries”. Robert Boyle was one of Helmont’s admirers, but even Boyle could not really understand how van Helmont one the one hand made numerous important discoveries and on the other hand “could also produce such unscientific nonsense” [6]. Historians note that Helmont’s works are difficult to understand because often, his scientific writing is mixed with nonscientific discourses on such things as religious metaphysics and cosmology. For instance, Helmont apparently believed in spontaneous generation, that the philosophers’ stone could be used to turn other metals into gold and that applying salve to the weapon that caused a wound would promote healing of the wound. Unfortunately, Helmont later got arrested and convicted of heresy under the Spanish Inquisition for his publication on the matter.