You are here: Home › literature › Clark Ashton Smith – The Last of the Great Romantics 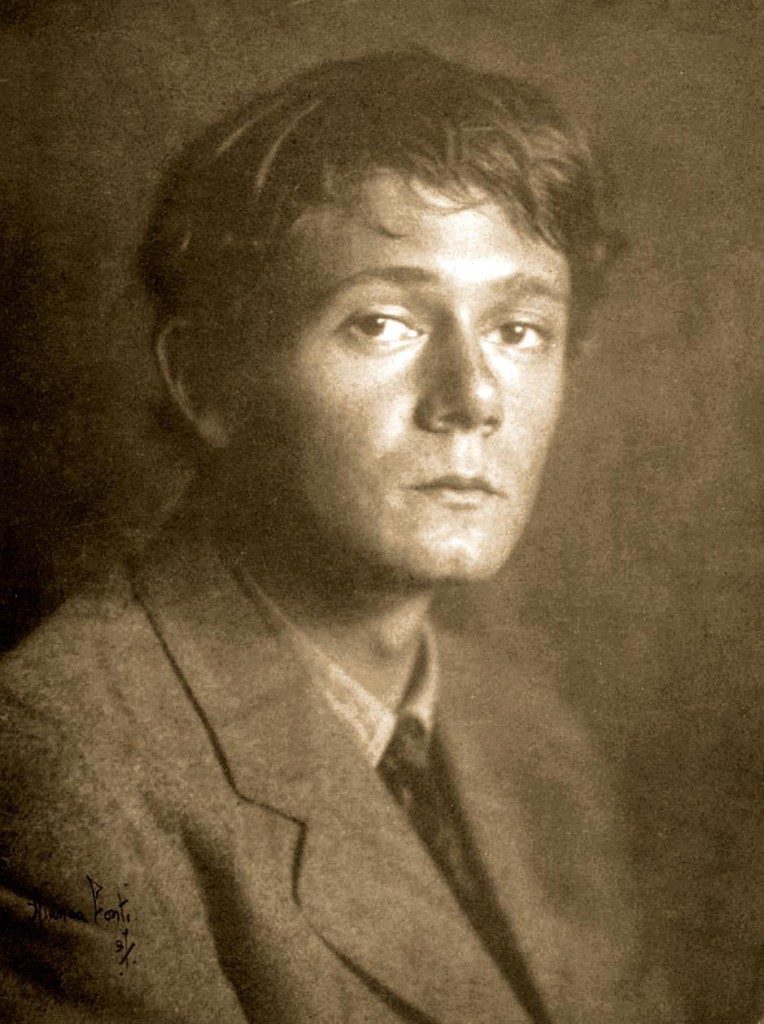 On January 13, 1893, self-educated American poet, sculptor, painter Clark Ashton Smith was born. Smith achieved recognition as author of fantasy, horror and science fiction short stories. As a poet, Smith is grouped with the West Coast Romantics alongside Ambrose Bierce, Joaquin Miller, Sterling, Nora May French, and remembered as “The Last of the Great Romantics” and “The Bard of Auburn“. Together with Robert E. Howard and H. P. Lovecraft Smith was one of the “big three of Weird Tales“.[1]

“In his bleak mercy, Death forever strips
The soul of light and memory, rendering blind
Our vision, lest surmounted deeps appal,
As when on mountain-heights a glance behind
Betrays with knowledge, and the climber slips
Down gulfs of fear to some enormous fall.”
— Clark Ashton Smith, The Unremembered

Smith was born in Long Valley, California, of English and New England parentage. He spent most of his life in the small town of Auburn, California, living in a small cabin built by his parents, Mary Frances „Fanny“ (née Gaylord) and Timeus Smith. Most of the time he lived in abject poverty, so that he was often forced to work as a fruit picker or forest worker in order to make ends meet for himself and his parents. His formal education was limited. Suffering from psychological disorders including a fear of crowds, he never went to high school and was educated at home. He refused a Guggenheim scholarship offered to him. He preferred to work on his knowledge autodidactically.

However, he was an insatiable reader. He read an unabridged dictionary through, word for word, studying not only the definitions of the words but also their derivations from ancient languages. Having an extraordinary eidetic memory, he seems to have retained most or all of it. On the other hand, Smith read the Encyclopædia Britannica through at least twice. His fondness for unusual and remote expressions can also be traced back to this reading. He taught himself French and Spanish in order to translate verse out of those languages.

The Keats of the Pacific

His first literary efforts, at the age of 11, took the form of fairy tales and imitations of the Arabian Nights. Some of these early stories were already published in Overland Monthly, other only posthumously. Later, he also wrote long adventure novels dealing with Oriental life, also strongly influenced by the tales of the Brothers Grimm [4], Edgar Allan Poe,[6] Lord Dunsany, and William Beckford‘s gothic novel Vathek. At age 17, he sold several tales to The Black Cat, a magazine which specialized in unusual tales. However, it was primarily poetry that motivated the young Smith and he confined his efforts to poetry for more than a decade. In 1912 he had published The Star-Treader and Other Poems, to favorable critical reception. George Sterling even referred to him as “the Keats of the Pacific”.

Smith made the acquaintance of the San Francisco poet George Sterling, whom he met at the beginning of 1911 and with whom he was friends until his suicide in November 1926. Sterling was a protege of author and journalist Ambrose Bierce.[5] Sterling had helped Smith to publish his first volume of poems. A little later, Smith’s health broke down and for eight years his literary production was intermittent, though he produced his best poetry during this period. A small volume, Odes and Sonnets, was brought out in 1918. Smith had met Sterling through a member of the Auburn Monday Night Club, where he had performed several of his poems with some success.

Smith came into contact with literary figures who would later form part of H.P. Lovecraft‘s circle of correspondents including the poet Samuel Loveman and bookman George Kirk [1]. In 1920 Smith composed a celebrated long poe, The Hashish Eater, or The Apocalypse of Evil. The publication was followed by a fan letter from H. P. Lovecraft, which was the beginning of 15 years of friendship and correspondence. With studied playfulness, Smith and Lovecraft borrowed each other’s coinages of place names and the names of strange gods for their stories, though so different is Smith’s treatment of the Lovecraft theme that it has been dubbed the “Clark Ashton Smythos.”

His early literary work did not provide much of an income, and Smith remained poor most of his life, often doing manual work to obtain an income. A side benefit of this was the improvement of his frail health by all that physical labor.[2] In 1925, perhaps to finally try to make a living with his pen and to support his parents, Smith started writing weird stories. His first, “The Abominations of Yondo,” was published in the Overland Monthly in 1926. At Lovecraft’s urging, Smith started submitting stories to the new pulp magazine Weird Tales, with his first appearance being “The Ninth Skeleton” in the September 1928 issue. 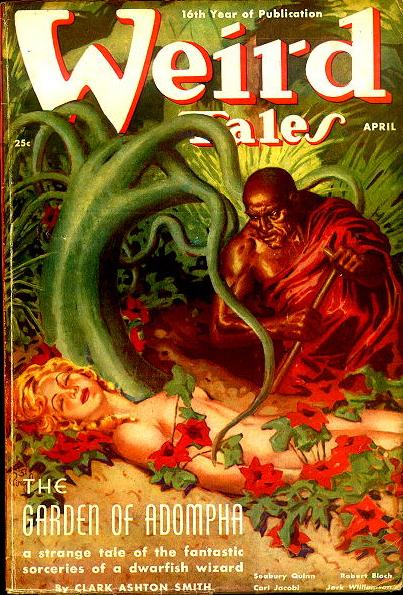 Cover of Weird Tales Magazine, April 1938, with a story of Clark Ashton Smith

At the beginning of the Depression in 1929, with his aged parents’ health weakening, Smith resumed fiction writing and turned out more than a hundred short stories between 1929 and 1934, nearly all of which can be classed as weird horror or science fiction. Like Lovecraft, he drew upon the nightmares that had plagued him during youthful spells of sickness. Smith’s horror fiction was set in fantastic realms: Atlantis and one of its islands, Poseidonis; Hyperborea, which was influenced by Lovecraft’s Cthulhu Mythos; the medieval, vampire-ridden Averoigne; Zothique, a land in the far future; Xiccarph, a distant planet; and Mars in the future. He used a poetic style for his prose, with rich language, unusual words, and exotic names.[2] To some extent Smith was influenced in his vision of such lost worlds by the teachings of theosophy and the writings of Helena Blavatsky.

In 1933 Smith began corresponding with Robert E. Howard, the Texan creator of Conan the Barbarian. From 1933 to 1936, Smith, Howard and Lovecraft were the leaders of the Weird Tales school of fiction and corresponded frequently, although they never met. In the Mid 1930s, Smith virtually ceased writing fiction. He had been severely affected by several tragedies occurring in a short period of time: Robert E. Howard’s death by suicide (1936), Lovecraft’s death from cancer (1937) and the deaths of his parents, which left him exhausted. As a result, he withdrew from the scene, marking the end of Weird Tales‘ Golden Age.

In 1942, three years after August Derleth founded Arkham House for the purpose of preserving the work of H.P. Lovecraft, Derleth published the first of several major collections of Smith’s fiction, Out of Space and Time (1942). This was followed by Lost Worlds (1944). The books sold slowly, went out of print and became costly rarities. In 1953 Smith suffered a coronary attack and married the year after for the first time aged 61. In August 1961 he quietly died in his sleep at his home in Pacific Grove, California, aged 68.

For Lovecraft, Clark Ashton Smith was one of the most talented authors of his generation. As he found in his essay Supernatural Horror in Literature, no living writer surpasses Smith in the “demonic strangeness and fertility of his designs. Who else would have seen and survived the “dissipated and feverishly distorted visions of infinite spheres and multiple dimensions” to be able to report on them. Nobody strikes the tone of “cosmic horror” as well as he does. In 2015 Smith posthumously received the Cordwain Smith Rediscovery Award for forgotten or no longer sufficiently appreciated science fiction authors.

Why our world needs science fiction: Etienne Augé at TEDxErasmusUniversity, [10]