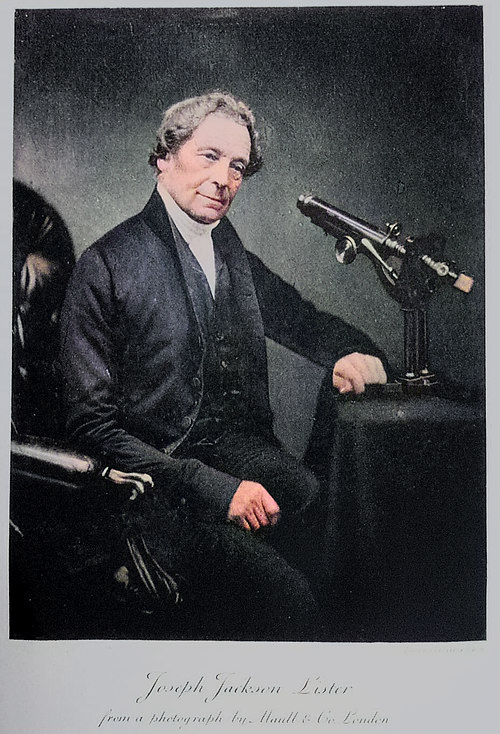 On January 11, 1786, British amateur opticist and physicist Joseph Jackson Lister was born. In 1826, Lister designed possibly the most important optical microscope ever made. It used an achromatic objective lens corrected for chromatic and spherical aberrations, the resulting image was at the time the clearest produced by any microscope.

Joseph Jackson Lister was the son of a London wine merchant and Quaker. He attended school until 1800 and was then apprenticed to his father’s wine business in Lothbury. When he turned 18, Lister was made a partner in the company. Lister met his future wife, Isabelle Harris while visiting the Quaker Ackworth School near Pontefract. Isabelle Harris taught reading and writing to girls, but left to marry Joseph Jackson Lister and together they lived first at Tokenhouse Yard, then Stoke Newington, and later bought Upton House. Together, the couple had several children including Joseph Lister, who was born in 1827 and studied medicine. Joseph should become the famous surgeon and a pioneer of antiseptic surgery.

J. J. Lister however, was mostly interested in natural history and he came to realize that the available microscopes back then did not deliver the best results and he believed that they were not able to provide the adequate resolution to reveal the structure of plant cells and animal cells in sufficient detail. Thus, Lister began to design and build achromatic lenses. An achromatic lens or achromat is a lens that is designed to limit the effects of chromatic and spherical aberration. Achromatic lenses are corrected to bring two wavelengths (typically red and blue) into focus on the same plane. Lister combined lenses of crown and flint glasses of different dispersion, in order to cancel chromatic aberration. Lister was able to demonstrate that spherical aberration could be minimised by the correct separation of the lens combinations, which led to the perfection of the optical microscope.

Chromatic aberration of a single lens causes different wavelengths of light to have differing focal lengths. The most common type of achromat is the achromatic doublet, which is composed of two individual lenses made from glasses with different amounts of dispersion. Typically, one element is a negative (concave) element made out of flint glass, which has relatively high dispersion, and the other is a positive (convex) element made of crown, which has lower dispersion. The lens elements are mounted next to each other, often cemented together, and shaped so that the chromatic aberration of one is counterbalanced by that of the other. 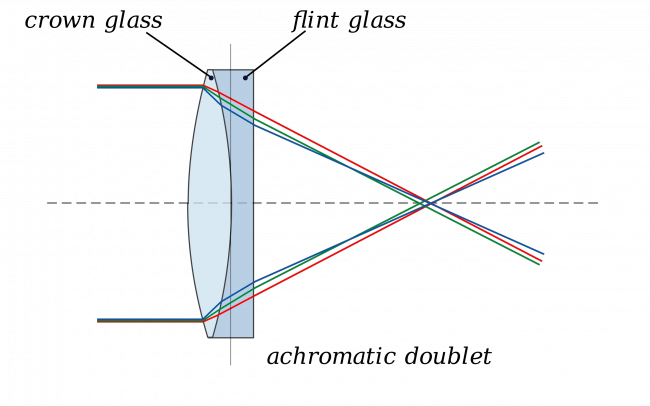 An achromatic doublet brings red and blue light to the same focus, and is the earliest example of an achromatic lens.

Theoretical considerations of the feasibility of correcting chromatic aberration were debated in the 18th century following Newton’s statement that such a correction was impossible.[4] Credit for the invention of the first achromatic doublet is often given to an English barrister and amateur optician named Chester Moore Hall. Hall wished to keep his work on the achromatic lenses a secret and contracted the manufacture of the crown and flint lenses to two different opticians, Edward Scarlett and James Mann. They in turn sub-contracted the work to the same person, George Bass, who realized the two components were for the same client and, after fitting the two parts together, noted the achromatic properties. However, Hall failed to appreciate the importance of his invention, and it remained known to only a few opticians.

Lister was able to make these improvements in his freetime while being fully engaged in his wine business. By 1826, he managed to present an improved microscope stand to be made by the instrument-making firm of William Tulley. In 1830, Lister published his work in a scientific paper titled ‘On Some Properties in Achromatic Object-Glasses Applicable to the Improvement of the Microscope‘, which was submitted to the Royal Society. In 1832, Lister was elected Fellow of the Royal Society.

Together with Andrew Ross and James Smith, Lister became microscope manufacturers and were able to to establish a very good reputation in doing so. They established a solid customer base in the scientific field including Airy, Herschel and fellow Quaker Dr Thomas Hodgekin,[5] with whom Lister discussed microscopic observations including those of red blood cells, leading to the identification of ‘Hodgkin’s disease’. Lister’s paper ‘On the Limit to Defining Power in Vision with the Unassisted Eye, the Telescope and the Microscope’ (1833) was presented to the Royal Microscopical Society by his son Lord Lister even though it was never actually published. Still, it is believed to have inspired many later scientists including Ernst Abbe.[6]