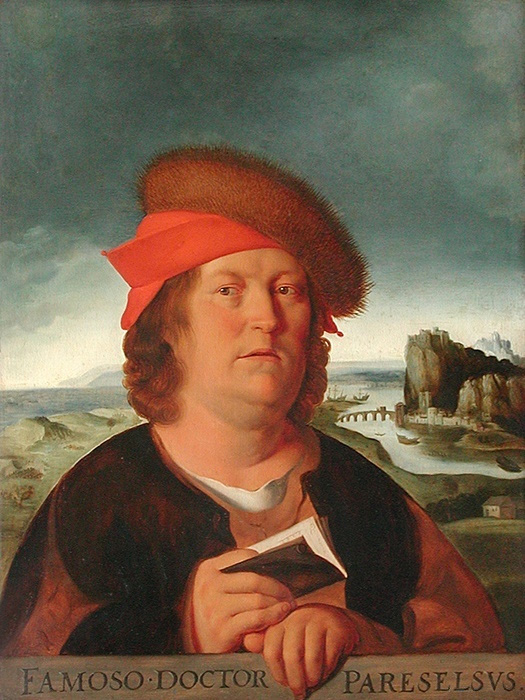 Probably in 1493,  the famous Renaissance physician, botanist, alchemist, astrologer, and general occultist, who called himself Paracelsus — with all testified names that never all occur simultaneously he can also be referred to as Philippus Theophrastus Aureolus Bombast von Hohenheim, was born.

“All is interrelated. Heaven and earth, air and water. All are but one thing; not four, not two and not three, but one. Where they are not together, there is only an incomplete piece.”
– Paracelsus – Collected Writings Vol. I (1926) edited by Bernhard Aschner, p. 110

The year of birth has to be calculated from the age on the two portraits of 1538 and 1540, besides the naturalized date 1493 also 1494 is possible. With his first name he was named after a Greek doctor and natural scientist Theophrastus; Philippus only appears in his epitaph and was perhaps his second Christian baptismal name. Finally, Aureolus is testified only sparsely and has not yet been convincingly explained. He gave himself the nickname Paracelsus; it was first documented in 1529. Through his father, who was a physician and chemist himself, Paracelsus gained his interest in medicine and alchemy, which he began studying at the University of Basel with 16. In Ferrara he obtained a doctorate in medicine, as he later testified in Basel under oath, he also later called himself a doctor of both medicines (body and wound medicine, i.e. internal medicine and surgery) (and was called so by a former fellow student), this title could only be obtained at a few Italian universities such as Ferrara. Research considers the doctorate credible and dates it around the year 1516.

His years of study and the long journeys that followed led Paracelsus to Italy, the Balkans, Hungary, Poland, Prussia, Denmark, the Netherlands and France, perhaps also to Rhodes, Spain, Portugal and the British Isles, curiously researching on the bubonic plague, practicing his medicine and collecting knowledge. He soon practiced astrology, which became a main part of his medicine and was one of the first to use minerals and chemicals for therapy. Through these practices, he got to name the element zinc and was responsible for the creation of laudanum. But even though, he could make up a good reputation as a physician, he got in trouble for his strange character quite often. He was known to be  arrogant and pretty much angered everyone in the European community after openly burning traditional medical books. In Basel, Paracelsus quickly came into conflict with the university. He refused to invoke its statutes and therefore never became a regular member of the teaching staff. Then he gave some of his lectures not in Latin, but in German. He threw a textbook of orthodox medicine into the St. John’s fire. In addition, he turned the pharmacists against him, because he wanted to control them more strongly. Froben, his most prominent patient, died in 1527, after which he was badly abused by a publicly struck pamphlet. The catastrophe occurred because a patient paid only a small part of the very high fee after successful treatment. Paracelsus sued him, and when he was wrong, he insulted the court. Fearing the consequences, he fled in February 1528 and broke his contract as a city doctor. From Colmar he tried in vain to return. 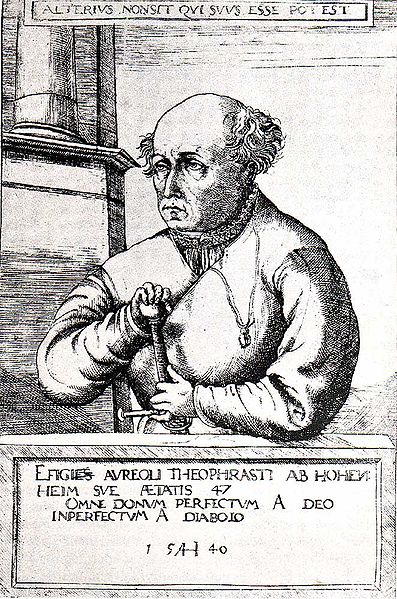 In 1529 Paracelsus stayed in Nuremberg. There he published two “Prognostikationen” (predictions for the following years, the first of several), in which he called himself Paracelsus for the first time. He also published two writings on syphilis, Vom Holtz Guaiaco gründlicher heylung and Von der Frantzösischen kranckheit Drey Bücher. The Council then forbade him from printing further books. 1534 Paracelsus was rejected in Innsbruck because of his poor appearance, in Sterzing the old believer and the Protestant clergyman examined him, with a writing about the plague he arrived there badly, afterwards he was well received in Meran. 1535 he wrote in Pfäfers a writing about the there health spa[13], which was printed immediately, and wrote for the abbot of the there monastery a medical council

Despite Paracelsus’ extraordinary character traits, he was valued for his many contributions to society including the distribution of the theory that our cosmos is based on the ‘tria prima‘ mercury, sulfur, and salt, which also defined the identities of humans. He was convinced, that a person’s health depends on the harmony of man and nature. In his views, the universe was one organism, influenced by a spirit, which put man and God on the same level. You may be right, assuming that the Church did not appreciate these theories and initiated many debates about Paracelsus’ ideas. Paracelsus was not only known to be the ‘Luther of Medicine‘, but also the ‘Father of Toxicology‘ and once said that “all things are poison, and nothing is without poison; only the dose permits something not to be poisonous.” The name or surname “Paracelsus”, as it was first found in astrological publications in 1529/1530, could be derived from the Latin para (“at”) and celsus (“high”) and thus be a Latinization of “Hohenheim”.

On April 15th 1541 Paracelsus was at the Wolfgangsee; on 21 September he dictated his will before witnesses in Salzburg. Three days later, on September 24, 1541, he died. The cause of death can no longer be determined with certainty. The bones have an increased mercury content, but deadly poisoning cannot necessarily be deduced from this. Mercury has been used since ancient times to treat leprosy symptoms and various skin diseases. When syphilis was introduced into Europe at the end of the 15th century, it was obvious to use the heavy metal to treat the disease. But because it was often wrong and dosed too high, it killed patients by the dozen. Furthermore, the skull shows traces of a “Bezold abscess”; whether this led to death or testifies to an earlier, healed illness, however, cannot be decided. Reports that Paracelsus died by force cannot be substantiated in any way: That was slander.

Paracelsus was a remarkably self confident man, who polarized his field of research with these new techniques and methods. However, he was able to fascinate the Europeans and was mentioned by numerous poets like Johann Wolfgang von Goethe or Thomas Mann. Due to the many myths that have developed around him, it is hard to distinguish true stories from fairy-tales. He questioned the then usual humoral pathology. With his medical interpretation of alchemy, which he called spagyric, he believed he had found the right way to medicine. In his archidoxies of 1526 he manifested his theses for the first time. After his death, the archidoxia formed the basis for the development of chemical medicine. The basis of Paracelsus’ understanding of nature was his teaching of the three principles (Tria Principia) in alchemy. In addition to the well-known principles sulphur (sulphur with the properties volatile and flammable) and mercury (mercury with the properties living, liquid and aqueous), the third new principle was salt (sal), which was expressed in the formation of solid forms in the earth. According to Paracelsus, medicine is based on the knowledge of nature and God. In order to understand things and thus also diseases and their correct treatment, on the one hand empirical findings are necessary, on the other hand – and much more importantly – the consideration of the big picture:

“For man can only be grasped from the macrocosm, not from himself. Only the knowledge of this agreement completes the physician” (Opus Paramirum).