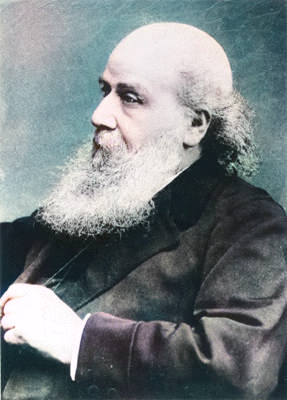 On September 3, 1815, English mathematician James Joseph Sylvester was born. He made fundamental contributions to matrix theory, invariant theory, number theory, partition theory and combinatorics. He also was the founder of the American Journal of Mathematics.

“It seems to be expected of every pilgrim up the slopes of the mathematical Parnassus, that he will at some point or other of his journey sit down and invent a definite integral or two towards the increase of the common stock.”
– James Joseph Sylvester, Collected Mathematical Papers, Vol. 2 (1908), p. 214.

Sylvester was born James Joseph in London, England, to Abraham Joseph, a Jewish merchant. James adopted the surname Sylvester when his older brother did so upon emigration to the United States — a country which at that time required all immigrants to have a given name, a middle name, and a surname. In 1828, at the age of 14, Sylvester was a student of Augustus De Morgan at the University of London. His family withdrew him from the University after he was accused of stabbing a fellow student with a knife. Subsequently he attended the Liverpool Royal Institution. Sylvester began his study of mathematics at St John‘s College, Cambridge in 1831. Although his studies were interrupted for almost two years due to a prolonged illness, he nevertheless ranked second in Cambridge‘s famous mathematical examination, the tripos, for which he sat in 1837. However, Sylvester was not issued a degree, because graduates at that time were required to state their acceptance of the Thirty-Nine Articles of the Church of England, and Sylvester, refused to do so because of his Jewish religion.

For the same reason he was not eligible for a Smith’s prize nor was he eligible to compete for a Fellowship.[1] In 1838 Sylvester became professor of natural philosophy at University College London. In 1841, he was awarded a BA and an MA by Trinity College, Dublin. In the same year he moved to the United States to be appointed to the chair of mathematics in the University of Virginia in Charlottesville for about six months, and returned to England in November 1843, following an altercation with a student for which the school’s administration did not take his side.[4]

On his return to England he studied law, alongside fellow British lawyer/mathematician Arthur Cayley,[2] with whom he made significant contributions to matrix theory while working as an actuary. One of his private pupils was Florence Nightingale.[3] In 1851 he discovered the discriminant of a cubic equation and first used the name ‘discriminant’ for such expressions of quadratic equations and those of higher order. In particular he used matrix theory to study higher dimensional geometry. He also contributed to the creation of the theory of elementary divisors of lambda matrices.[1] He did not obtain a position teaching university mathematics until 1855, when he was appointed professor of mathematics at the Royal Military Academy, Woolwich, from which he retired in 1869, because the compulsory retirement age was 55. The Woolwich academy initially refused to pay Sylvester his full pension, and only relented after a prolonged public controversy, during which Sylvester took his case to the letters page of The Times.

“Number, place, and combination . . . the three intersecting but distinct spheres of thought to which all mathematical ideas admit of being referred.”
– James Joseph Sylvester, Collected Mathematical Papers, Vol. 1 (1904), p. 91.

Following his early retirement, Sylvester (1870) published a book entitled The Laws of Verse in which he attempted to codify a set of laws for prosody in poetry. For three years Sylvester appears to have done no mathematical research but then Chebyshev visited London and the two discussed mechanical linkages which can be used to draw straight lines.[9] After working on this topic Sylvester lectured on it at an evening lecture entitled On recent discoveries in mechanical conversion of motion which he gave at the Royal Institution. One mathematician in the audience at this lecture was Kempe and he became absorbed by this topic. Kempe and Sylvester worked jointly on linkages and made important discoveries.[1] In 1872, he finally received his B.A. and M.A. from Cambridge, having been denied the degrees due to him being a Jew.

In 1877 Sylvester accepted a chair at Johns Hopkins University in Baltimore, Maryland, USA, and he founded in 1878 the American Journal of Mathematics, the first mathematical journal in the United States, whose first editor he was. In 1883, he returned to England to take up the Savilian Professor of Geometry at Oxford University. He held this chair until his death, although in 1892 the University appointed a deputy professor to the same chair.

Sylvester was primarily an algebraist. He did brilliant work in the theory of numbers, particularly in partitions (the possible ways a number can be expressed as a sum of positive integers) and Diophantine analysis (a means for finding whole-number solutions to certain algebraic equations). Sylvester invented a great number of mathematical terms such as “matrix”, “graph” and “discriminant”. He coined the term “totient” for Euler’s totient function φ(n). His collected scientific work fills four volumes. In 1880, the Royal Society of London awarded Sylvester the Copley Medal, its highest award for scientific achievement.