You are here: Home › mathematics › Florence Nightingale – The Lady with the Lamp 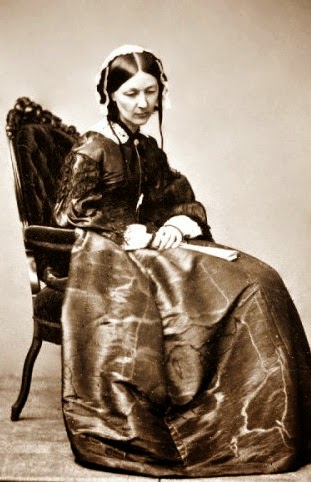 On May 12, 1820, celebrated British social reformer and statistician Florence Nightingale was born. She is best known for being the founder of modern nursing. She came to prominence while serving as a nurse during the Crimean War, where she tended to wounded soldiers. She was known as “The Lady with the Lamp” after her habit of making rounds at night.

It is known that Florence Nightingale was a very well educated young woman and she realized the lack of opportunity for females in her social circle quite early. It is assumed that she had a very good relationship with her father, who was involved in anti-slavery movements. He was known to have respected his daughter as a friend and companion and supported her education highly. Florence started to visit people living in poverty and her interest in helping ill people increased highly in her early years. Florence often came to London to investigate possible occupations for women in the city’s hospitals. Unfortunately, nurses were not very much respected, since the occupation did not require a decent education at that time. Her visits became more frequent around 1844, but in this period, she also took time to travel to Egypt and Paris and she managed to get an introduction to a convent at Alexandria. She noticed that the disciplined and well-organised Sisters made better nurses than women in England. Following these events, Florence Nightingale attended the Institute of Protestant Deaconesses at Kaiserswerth, a training school for women teachers and nurses. 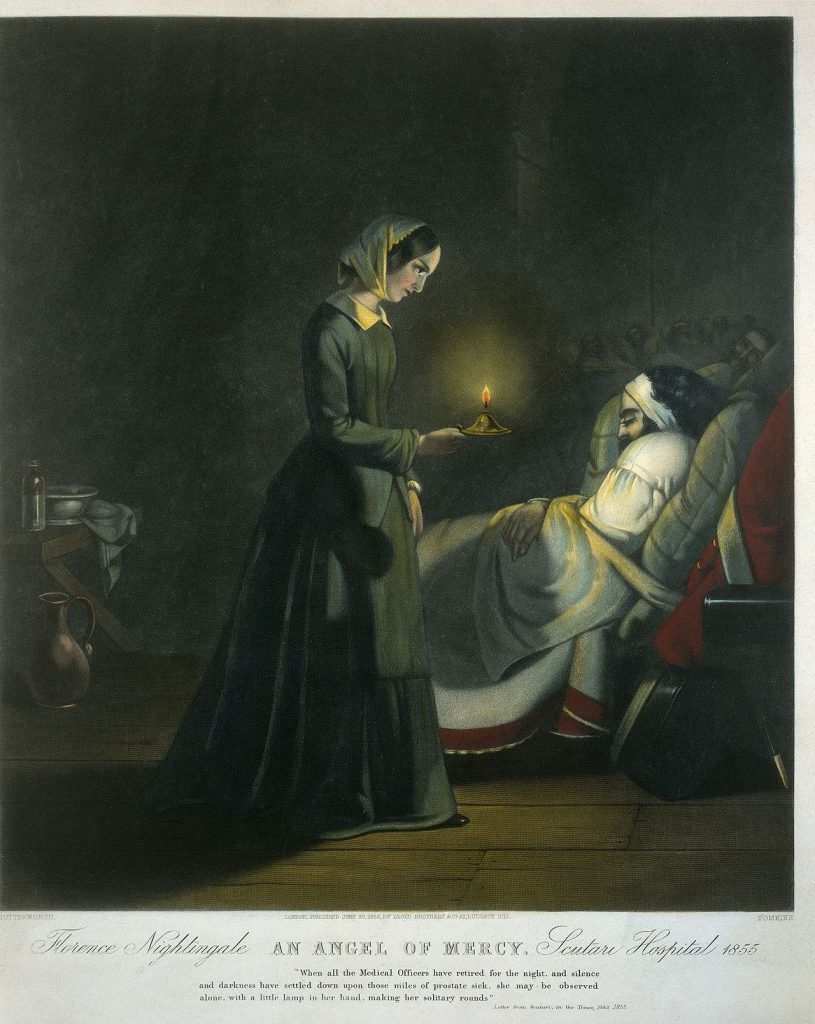 A major milestone in Florence Nightingale’s life was the beginning of the Crimean War in 1854. It was reported that sick and heavily wounded people suffered in English camps and in the media it was pointed out how different the conditions for wounded soldiers in French camps were. A shout out to all women in England was made to help the people of their country in need. Nightingale decided to go to the Crimea approximately in October of the same year and embarked with over thirty other nurses, reaching Scutari during the eve of the battle of Inkerman. Nightingale functioned as Superintendent of the Female Nurses in the Hospitals in the East, but everyone just called her the Lady in Chief. The headquarters for the newly arrived nurses was the barrack hospital at Scutari. The place was described as incredibly filthy and Nightingale explained that there was no water, soap, clothes or enough food when she arrived. The soldiers just laid there in their uniforms, spreading the infectious diseases. Next to the lack of sufficient supplies, the nurses also had to face the offensive behavior of the orderlies.

The Lady with the Lamp

Fortunately, Nightingale and her crew managed to improve the situation at the hospital. More and more support, supplies and food were sent and Nightingale established a vast kitchen and a laundry. Next to the full time job at the hospital, Nightingale also took time to take care of the soldiers’ families and made rounds, watching the wounded soldiers at night since she was the only nurse allowed in the wards. The men started calling her the Lady with the Lamp. Henry Wadsworth Longfellow then popularized the phrase with his poem Santa Filomena (extract):

Lo! in that house of misery
A lady with a lamp I see
Pass through the glimmering gloom,
And flit from room to room.

With all the ill people in the hospital and the bad working condition for the doctors and nurses, many of them got sick or even passed away themselves. Also, the frost-bite and dysentery from exposure in the trenches before Sevastopol made the wards fuller than before and the death-rate increased to 42% by February 1855. Nightingale was not immune to the infectious diseases as well. When she visited Balaclava, she fell ill with the so called Crimean fever, but fortunately recovered and resumed her work in Scutari later on. In 1856, Florence Nightingale returned home and entered England without anyone noticing. She got the chance to meet Queen Victoria and Prince Albert, telling them about the miserable situation and then, a fund had been set up to found a training school for nurses.[5]

The Nightingale School and Home for Nurses

The Nightingale School and Home for Nurses was established at St. Thomas’s Hospital and she watched the progress of the new institution with practical interest even though she was asked to be its superintendent. Her health began to decline so she preferred to settle in London and retire from her busy work life. In this period, she published several works and reports on the army medical departments in the Crimea. In the following years, the first military hospital was established and an army medical college was opened at Chatham. 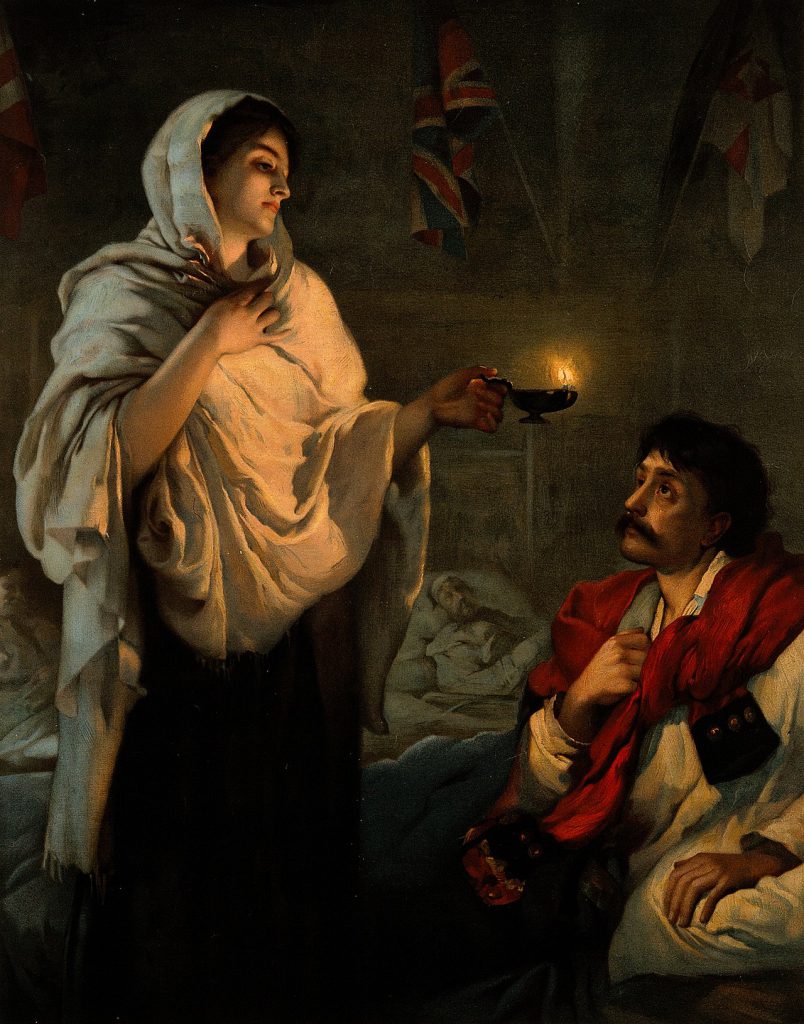 The Lady with the Lamp. Popular lithograph reproduction of a painting of Nightingale by Henrietta Rae, 1891.

Nightingale immediately offered to leave for India when the Indian Mutiny broke out in 1857. Even though her services were not required, she became interested in the sanitary condition of the army and people there. From her work, a Sanitary Department was established in the Indian government. She became familiar with many facets of Indian life and demanded that there should be improvements in health and sanitation there.

A Gift for Mathematics

Florence Nightingale exhibited a gift for mathematics from an early age and excelled in the subject under the tutelage of her father. Later, Nightingale became a pioneer in the visual presentation of information and statistical graphics. She used methods such as the pie chart, which had first been developed by William Playfair in 1801.[6]  While taken for granted now, it was at the time a relatively novel method of presenting data. Indeed, Nightingale is described as “a true pioneer in the graphical representation of statistics“, and is credited with developing a form of the pie chart now known as the polar area diagram, or occasionally the Nightingale rose diagram, equivalent to a modern circular histogram, to illustrate seasonal sources of patient mortality in the military field hospital she managed. Nightingale called a compilation of such diagrams a “coxcomb”, but later that term would frequently be used for the individual diagrams. She made extensive use of coxcombs to present reports on the nature and magnitude of the conditions of medical care in the Crimean War to Members of Parliament and civil servants who would have been unlikely to read or understand traditional statistical reports. In 1859, Nightingale was elected the first female member of the Royal Statistical Society.

Florence Nightingale passed away on 13 August 1910.