You are here: Home › mathematics › Arthur Cayley and his Love for Pure Mathematics 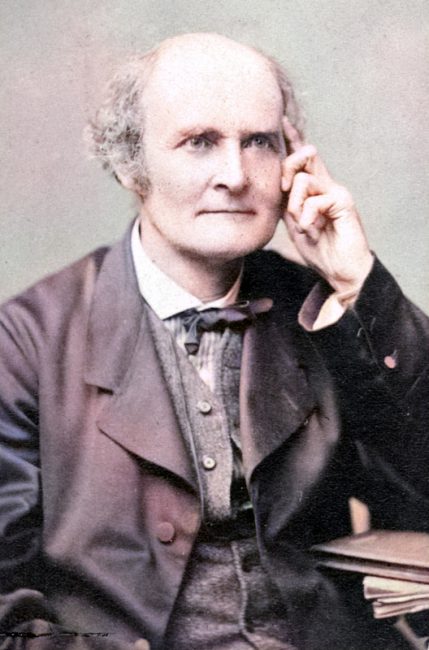 On January 26, 1895, British mathematician Arthur Cayley passed away. He was the first to define the concept of a group in the modern way and helped to found the modern British school of pure mathematics.

“As for everything else, so for a mathematical theory: beauty can be perceived but not explained. “
— Arthur Cayley, President’s address (1883) to the British Association for the Advancement of Science, in [13]

Arthur Cayley was born in Richmond, London, England, on 16 August 1821 to his father Henry Cayley, a descended from an ancient Yorkshire family, who settled in Saint Petersburg, Russia, as a merchant. Arthur spent his first eight years in Saint Petersburg before his parents were settled permanently at Blackheath, near London in 1829. Arthur was sent to a private school. He early showed great liking for, and aptitude in, numerical calculation. At age 14 he was sent to King’s College School. The school’s master observed indications of mathematical genius and advised that Arthur be encouraged to pursue his studies in this area rather than follow his father’s wishes to enter the family business as merchants.

Thus, at the unusually early age of 17 Cayley began residence at Trinity College, Cambridge. Still as an undergraduate at the age of twenty, Cayley already published three papers in the Cambridge Mathematical Journal, on subjects which had been suggested by reading the Mécanique analytique of Lagrange and some of the works of Laplace.[4,11] Cayley’s tutor at Cambridge was George Peacock and his private coach was William Hopkins. He finished his undergraduate course by winning the place of Senior Wrangler, and the first Smith’s prize in 1842. His next step was to take the M.A. degree, and win a Fellowship by competitive examination. He continued to reside at Cambridge for four years; during which time he took some pupils, but his main work was the preparation of 28 memoirs to the Cambridge Mathematical Journal.

A Cambridge fellowship had a limited tenure so Cayley had to find a profession. He chose law and was admitted to the bar in 1849. He spent 14 years as a lawyer but Cayley, although very skilled in conveyancing (his legal speciality), always considered it as a means to make money so that he was able to pursue mathematics. His friend the mathematician James Joseph Sylvester,[5] his senior by five years at Cambridge, was then an actuary, resident in London. They used to walk together round the courts of Lincoln’s Inn, discussing the theory of invariants and covariants. During this period of his life, extending over fourteen years, Cayley produced between two and three hundred papers.

At age 42 Cayley was appointed to a newly created Sadleirian professorship on ‘the principles of pure mathematics’ at Cambridge and he He gave up a lucrative practice for a modest salary. He at once married and settled down in Cambridge. He published over 900 papers and notes covering nearly every aspect of modern mathematics. The most important of his work is in developing the algebra of matrices, work in non-euclidean geometry and n-dimensional geometry. As early as 1849 Cayley published a paper linking his ideas on permutations with the French mathematician Augustin-Louis Cauchy‘s,[6] followed by two papers which are remarkable for the insight they have of abstract groups.

At that time the only known groups were permutation groups and even this was a radically new area, yet Cayley defines an abstract group and gives a table to display the group multiplication. He gives the ‘Cayley tables‘ of some special permutation groups but, much more significantly for the introduction of the abstract group concept, he realized that matrices and quaternions were groups. Cayley developed the theory of algebraic invariance, and his development of n-dimensional geometry has been applied in physics to the study of the space-time continuum. His work on matrices served as a foundation for quantum mechanics. Cayley also suggested that euclidean and non-euclidean geometry are special types of geometry. He united projective geometry and metrical geometry which is dependent on sizes of angles and lengths of lines.

“It is difficult to give an idea of the vast extent of modern mathematics. The word “extent” is not the right one: I mean extent crowded with beautiful detail—not an extent of mere uniformity such as an objectless plain, but of a tract of beautiful country seen at first in the distance, but which will bear to be rambled through and studied in every detail of hillside and valley, stream, rock, wood, and flower.
— Arthur Cayley, President’s address (1883) to the British Association for the Advancement of Science, in [13]

Cayley’s manner was diffident but decisive. He was a capable administrator who quietly and effectively discharged his academic duties. He was an early supporter of women’s higher education and steered Newnham College, Cambridge (founded in 1871), during the 1880s. Despite aiding the careers of a few students who naturally took to pure mathematics, Cayley never established a full-fledged research school of mathematics at Cambridge.[3] His doctoral students include the mathematicians H. F. Baker, Andrew Forsyth, and Charlotte Angas Scott. [8] In mathematics Cayley was an individualist. He handled calculations and symbolic manipulations with formidable skill, guided by a deep intuitive understanding of mathematical theories and their interconnections. His ability to keep abreast of current work while seeing the wider view enabled him to perceive important trends and to make valuable suggestions for further investigation.

Cayley was awarded numerous honors, including the Copley Medal in 1882 by the Royal Society. He served as the president of the BMS (British Association for the Advancement of Science), the Cambridge Philosophical Society, the London Mathematical Society and the Royal Astronomical Society. On January 26, 1895, Cayley passed away due to natural causes at age 73.