You are here: Home › chemistry › Wilhelm Ostwald and the Foundation of Modern Physical Chemistry 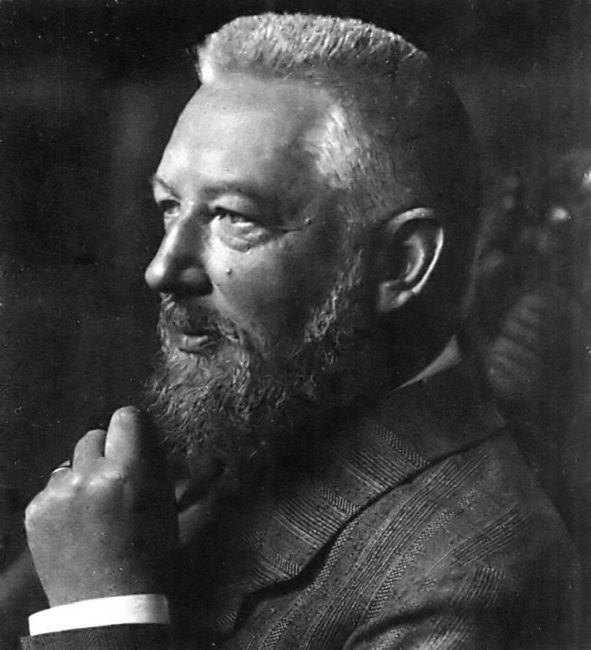 On September 2, 1853, Baltic German chemist and Nobel Laureate Wilhelm Ostwald was born. He is credited with being one of the modern founders of the field of physical chemistry and received the 1909 Nobel Prize in Chemistry for his work on catalysis, chemical equilibria and reaction velocities.

Wilhelm Ostwald was born as the second of three sons of the cooper master Gottfried Ostwald and his wife in Riga (today Latvia), then part of the Russian Empire. From 1864 to 1871 Ostwald attended the Realgymnasium in Riga and graduated from high school. In 1872 he began studying chemistry at the University of Dorpat. In 1875 he finished his studies with the candidate thesis and became an assistant at the Institute of Physics with Arthur von Oettingen, later at the Institute of Chemistry with Carl Schmidt.

In 1877 Ostwald submitted his master’s thesis on “Volumochemical Studies on Affinity“. The following year he completed his dissertation “Volumochemical and Optical-Chemical Studies“. In 1880 Ostwald was appointed lecturer for physical chemistry at the University of Dorpat. From 1880 he also worked as a teacher of physics, mathematics and chemistry at a secondary school. In 1881, Ostwald was appointed full time Professor of Chemistry at the Polytechnicum in Riga and became Professor of Physical Chemistry at Leipzig University six years later. In 1898 he inaugurated his new Institute of Physics and Chemistry.

It is assumed that Wilhelm Ostwald started his experimental work in 1875 with investigations of the law of mass action of water in relation to the problems of chemical affinity, with emphasis on electrochemistry and chemical dynamics. From 1894 Wilhelm Ostwald studied catalytic processes. He worked on inorganic, organic and biochemical questions and defined the majority of life processes as catalytic processes. The scientist published an initial determination of the term catalysis in the same year.

In 1902, Wilhelm Ostwald filed the patent for the Ostwald process, used in the manufacture of nitric acid. Often, the year 1908 is given for the invention of the Ostwald process, which may have been the interval between filing the patent and the time it was granted. With the help of the Ostwald process, a more economical and large-scale production of fertilizers and explosives was possible. Also, Ostwald did significant work on dilution theory leading to his discovery of the law of dilution which is named after him. Ostwald’s rule states that in general it is not the most stable but the least stable polymorph that crystallises first. The scientist suggested that the solid first formed on crystallisation of a solution or a melt would be the least stable polymorph. This can be explained on the basis of irreversible thermodynamics, structural relationships, or a combined consideration of statistical thermodynamics and structural variation with temperature.

In 1906, Wilhelm Ostwald was elected a member of the International Committee on Atomic Weights and in 1909, Ostwald was awarded the Nobel Prize for Chemistry for his work on catalysis, chemical equilibria and reaction velocities. With this highest recognition for a scientist, the Nobel Prize Committee honoured not only this achievement, but also his decades of work as a researcher and university lecturer. The award also included the right to nominate for the Nobel Prize in subsequent years. He used it to propose Albert Einstein for the Nobel Prize in Physics in 1910, and again later in 1921.

Ostwald received honorary doctorates from several universities in Germany, Great Britain and the USA, and was made an honorary member of learned societies in Germany, Sweden, Norway, the Netherlands, Russia, Great Britain and the USA. From fall 1905 to summer 1906 he lectured on physical chemistry and natural philosophy at Harvard University, MIT and Columbia University in New York.

In addition to his work in chemistry, Wilhelm Ostwald was very productive in an extremely broad range of fields. His published work, which includes numerous philosophical writings, contains about forty thousand pages. Ostwald was also engaged in the peace movement of Berta von Suttner. After his return Ostwald became emeritus in 1906 and moved his residence to the house “Energie” in Großbothen to work as a “free researcher” and continued his studies and publication on philosophy, such as ‘The energetic imperative‘, ‘Modern natural philosophy‘, ‘The pyramid of the sciences‘. Next to his research, Wilhelm Ostwald also supported the middle-class pacifist movement, was interested in educational reforms as well as in monism and studied colours and shapes, determined to find a scientific standardization for colors. Some of his works in the field include ‘The color primer‘ and ‘Color theory‘.

Ostwald process: Catalytic oxidation of ammonia for the production of nitric acid [6]