You are here: Home › medical science › Sir James Black and the Beta Blockers 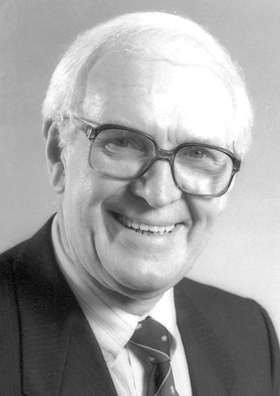 On June 14, 1924, British pharmacologist and Nobel Laureate Sir James Whyte Black was born. Black developed propranolol, a beta blocker used for the treatment of heart disease. Black was also responsible for the development of cimetidine, a H2 receptor antagonist, a drug used to treat stomach ulcers. For both developments he was awarded the 1968 Nobel Prize in Medicine.

James Black was born in Uddingston, Lanarkshire, UK, the fourth of five sons of a Baptist working-class family. His father was a Scottish coal miner who worked his way up to mining engineer. Black was brought up in Fife, educated at Beath High School, Cowdenbeath, and, at the age of 15, won a scholarship to the University of St Andrews in 1943 and graduated from University of St Andrews School of Medicine with an MB ChB in 1946. After graduating, he stayed at University College to join the physiology department as an assistant lecturer before taking a lecturer position at King Edward VIII College of Medicine in Singapore that subsequently became part of the University of Malaya, where he stayed for three years to work on his large college debts.

The Body’s Production of Histamine

He moved back to London in 1950 and then on to join the University of Glasgow where he established the Veterinary Physiology Department and developed an interest in the way adrenaline affects the human heart, particularly in those suffering from angina pectoris, i.e., the spasms of intense pain felt in the chest when the heart is not receiving enough oxygen.[2] During this time he began research on the mechanism of increase in gastricsecretions caused by the body’s production of histamine.[3] It was known that beta receptors in the heart muscle, when stimulated by the hormones epinephrine and norepinephrine, cause the heartbeat to quicken and increase the strength of the heart’s contractions, thus increasing that organ’s oxygen requirement. Black developed a drug that would block the beta receptor sites, thus preventing epinephrine and norepinephrine from attaching to them. The resulting inhibition of the hormones’ excitatory effects reduced the heart’s demand for oxygen and could thus help relieve anginal pain. [2]

A Theory to Prevent the Effects of Adrenaline

Having formulated a theory of an approach by which the effects of adrenaline might be annulled, he joined ICI Pharmaceuticals in 1958, remaining with the company until 1964, during which time he invented propranolol, which later became the world’s best-selling drug. During this time Black pioneered a method of research whereby drug molecules were purposefully built instead of being synthesized first and then investigated for their potential medical uses. The discovery of propranolol was hailed as the greatest breakthrough in the treatment of heart disease since the discovery of digitalis.[5]

Beta-blockers, developed in the 1960s, were equally revolutionary in solving problems with impaired heart muscles. They were based on propranolol and, much as cimetidine did for ulcers, moved the established way to relieve angina using nitrates into a different realm. Black attacked the source of disorders, rather than their symptoms, by designing molecules to interact with cell receptors, the proteins on the surface of or within a cell that modify the cell’s behavior.[4]

Since ICI was not supporting Black’s research of inventing drugs for treatment of stomach ulcers, he resigned in 1964 and joined Smith, Kline and French, where he developed his second major drug, cimetidine, which was launched under the brand name Tagamet in 1975 and soon outsold propranolol to become the world’s largest-selling prescription drug. Cimetidine was the first of a new class of drugs, the H2-receptor antagonists.

Black was appointed professor, and head of department, of pharmacology at University College London in 1973 where he established a new undergraduate course in medicinal chemistry but he became frustrated by the lack of funding for research and accepted the post of director of therapeutic research at the Wellcome Research Laboratories in 1978. In 1984, Black then became Professor of Analytical Pharmacology at the Rayne Institute of King’s College London medical school, where he remained until 1992. He established the James Black Foundation in 1988 with funding from Johnson and Johnson and led a team of 25 scientists in drugs research, including work on gastrin inhibitors which can prevent some stomach cancers.

From the archive: Sir James Black, [9]