You are here: Home › philosophy › Isaac Casaubon – The Most Learned Man in Europe 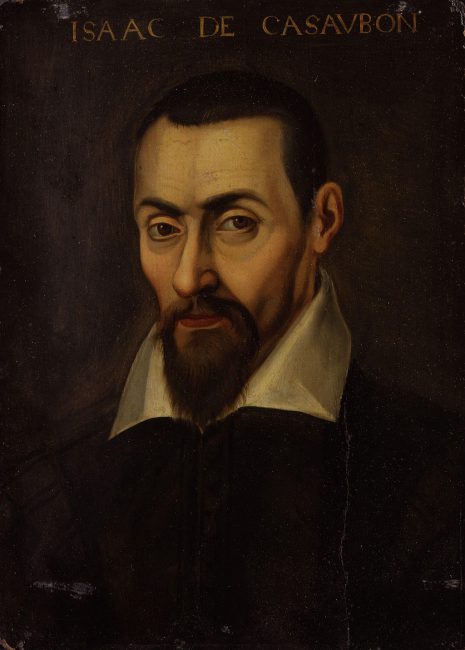 On February 15, 1559, French classical scholar and philologist Isaac Casaubon was born. Casaubon is known among philologists and historians of philosophy today above all for his proof in De rebus sacris et ecclesiasticis exercitationes XVI (1614, London) that the so-called Corpus Hermeticum could not have been created earlier than the first century AD. He was regarded by many of his time as the most learned man in Europe.

Isaac Causaubon – The Life of  Philosopher

Isaac Casaubon was born in Geneva, Switzerland, as the son of Huguenot refugees. After the Edict of Nantes was issued, the family returned to France after the promulgation of the Edict of Saint-Germain in 1562, and settled in Crest in the Dauphiné, where his father Arnaud Casaubon became pastor of the local community. He supposedly received his first Greek lessons from his father after the so-called Bartholomew’s Night, when he was fleeing from Catholic persecutors in a cave. At the age of nineteen, he was sent to the University of Geneva where he studied Greek under the guidance of the Cretan François Portus. The latter died in 1581, recommending that Casaubon, then aged twenty-two, succeed him. In Geneva, he  met Richard Thomson, professor at Clare College, Cambridge, and through Thomson he came into contact with Joseph Justus Scaliger. They began an on-going correspondence in 1594, never met each other but developed admiration, mutual esteem and friendship.[5]

Casaubon married a daughter of the eminent humanist printer Henri Estienne, and in 1596 encouraged by influential French men of letters, the Protestant Jacques Bongars, the Catholic Jacques de Thou, and the convert Philippe Canaye Sieur du Fresne, Casaubon went back to France following a call to the University of Montpellierwith the title of King’s Counsellor and Professor of Languages and Good Letters. However, he stayed there for only three years, and also took many leaves of absence.He was badly treated and poorly paid by the university authorities. Obviously, he did not like it there and began to think that publishing Greek books would be a more appropriate task.

The Edition of Greek Books

At Geneva he had produced some notes on Diogenes Laërtius, Theocritus and the New Testament. He debuted as an editor with a complete edition of Strabo (1587), of which he was so ashamed afterwards that he apologized to Scaliger for it. This was followed by the text of Polyaenus, an editio princeps, 1589; a text of Aristotle, 1590; and a few notes contributed to Estienne’s editions of Dionysius of Halicarnassus and Pliny‘s Epistolae.[6] His edition of Theophrastus‘s Characteres (1592), is the first example of his peculiar style of illustrative commentary, at once apposite and profuse. When he left for Montpellier he was already engaged upon his magnum opus, his editing of and commentary on Athenaeus.

In Lyon, Casaubon lived in the house of Méric de Vicq, surintendant de la justice, a Catholic, but a man of acquirements, whose connexions were with the circle of liberal Catholics in Paris. In the suite of De Vicq Casaubon made a flying visit to Paris, and was presented to Henry IV. The king was very gracious, and said something about employing Casaubon’s services in the “restoration” of the fallen University of Paris. However, in 1600 Casaubon was called to Paris, where he became involved in a religious controversy between Roman Catholic and Protestant theologians that was to haunt him for the remainder of his life.  Casaubon remained in Paris until 1610. However, no more was said about the university. The recent reform of the university of Paris had closed its doors to all but Catholics; and though the chairs of the College de France were not governed by the statutes of the university, public opinion ran so violently against heresy, that Henry IV. dared not appoint a Calvinist to a chair, even if he had desired to do so. Thus, Casaubon was assigned a pension by King Henry IV and succeeded to the salaried post of sublibrarian of the royal library.

In Paris Casaubon remained till 1610. These ten years were the brightest period of his life. He had attained the reputation of being, after Scaliger, the most learned man of the age, – an age in which learning formed the sole standard of literary merit. Among philologists and historians of philosophy, Casaubon is known today above all for his proof in De rebus sacris et ecclesiasticis exercitationes XVI (1614, London) that the so-called Corpus Hermeticum could not have been created earlier than the first century AD. The Corpus Hermeticum is a collection of Greek treatises in letter, dialogue and sermon form on the creation of the world, the shape of the cosmos and human and divine wisdom. Already in ancient times, Hermes Trismegistos was considered the author, to whom a multitude of religious, astrological and magical writings were attributed, although it was originally a designation of the gods. The Corpus Hermeticum is considered the most important source of the hermetic secret teachings. Direct influences on the Christian gnosis of the 3rd and 4th century are demonstrable. The treatises contain influences of the Egyptian and Orphic mysteries, Neoplatonic thoughts of reincarnation, ecstasy, purification, sacrifice and mystical union with God. For the enlightened spirits of the 17th century and of all later centuries, a belief that had inspired many of the great free Renaissance humanists from Marsilio Ficino [7] to Giordano Bruno [8] had to be put aside: namely, that there was an extra-biblical ancient wisdom from Mosaic and pre-Mosaic times that could provide the basis for all true philosophy. As a substitute, however, European intelligence soon “discovered” the extra-biblical traditions of India and China.

Cover page of the Dutch translation of the Corpus Hermeticum by Abraham Willemsz van Beyerland, 1643

Casaubon concluded from text-critical considerations that these texts must be Hellenistic treatises, which could hardly have been written before the 2nd century. According to Casaubon, style and choice of words do not allow for a dating to the time of Moses, but rather point to Hellenistic authors. In addition, he identifies quotations and allusions from Greek and Christian literature which exclude the possibility of a pre-2nd century origin. His verdict (which once again shows how formative the almost thirteen centuries of Christian view of the Corpus Hermeticum is) is finally: the Corpus Hermeticum has nothing to do with Egyptian antiquities, but is a Christian forgery that was intended to serve the mission to the Gentiles.

In 1610, after the king’s assassination, Casaubon was invited to England, where he was naturalized in 1611. Though he retained his appointments in France, he never returned there. Casaubon found great success in England. John Overall, one of England’s most learned high clergymen, received him and his whole family into the deanery of St Paul’s, and entertained him there for a year. Lancelot Andrewes, then Bishop of Ely, also became Casaubon’s friend, taking him to Cambridge, where he met with a most gratifying reception from the notabilities of the university.  In 1613 he was taken to Oxford by Sir Henry Savile, where, amid the homage and feasting of which he was the object, his principal interest was for the manuscript treasures of the Bodleian Library. He also corresponded with the translators of the King James Version of the Bible and helped resolve issues in the translation. However, the most serious cause of discomfort in England was that his time was no longer his own. He was continually being summoned to one or other of James’s hunting residences in order to converse. The king and the bishops compelled him to write pamphlets on the subject of the day, the royal supremacy. At last, ashamed of misappropriating Casaubon’s stores of learning, they asked him to refute the popular Annals of Baronius.

Isaac Casaubon died in London in 1614, of a congenital malformation of the bladder; but his end was hastened by an unhealthy life of over-study, and by his anxiety to acquit himself creditably in his criticism on Baronius. He was buried in Westminster Abbey.  The scholars in Foucault’s Pendulum by Umberto Eco and Middlemarch by George Eliot are named Casaubon.