You are here: Home › philosophy › Marsilio Ficino and his Florentine Academy 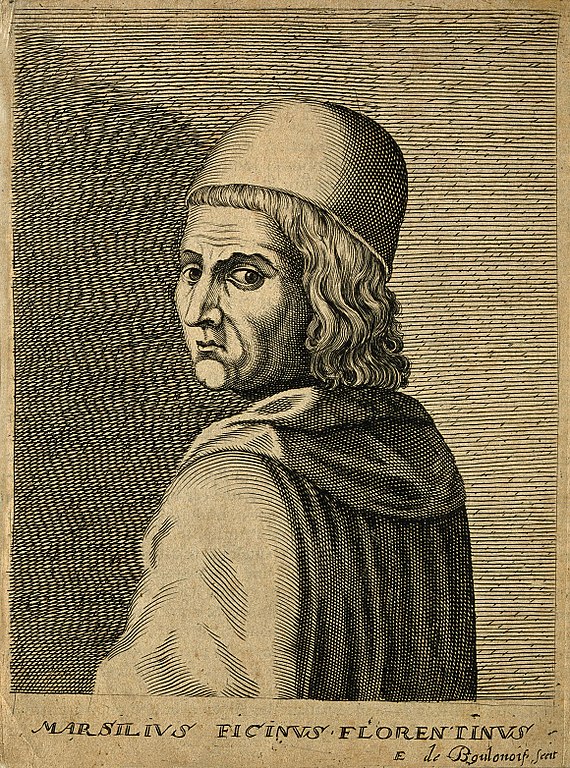 On October 19, 1433, Italian scholar and Catholic priest Marsilio Ficino was born. He was one of the most influential humanist philosophers of the early Italian Renaissance. With his translations and commentaries he contributed significantly to the knowledge of Plato and Platonism in his epoch and made the writings of ancient Greek-speaking authors accessible to the Latin-speaking public. His understanding of Plato, influenced by Plotin‘s Neoplatonism, became groundbreaking for the early modern period.

“The people who have discovered something important in any of the more noble arts have principally done so when they have abandoned the body and taken refuge in the citadel of the soul.”
– Marsilio Ficino, Platonic Theology, Book 13, Chapter 2

Marsilio Ficino was born in Figline, a small village about 25 km southeast of Florence, Italy, where he grew up. His father Diotifeci d’Agnolo di Giusto was the personal physician of the famous Florentine statesman Cosimo de’ Medici. At the age of almost sixty, Ficino reported from his childhood that Cosimo met the Byzantine scholar Georgios Gemistos Plethon at the Council of Florence, who had won him over to Platonism. Cosimo was so impressed by the appearance of the Byzantine Platonist that he decided to found an academy in Florence, following the example of Plato’s school in Athens, the Platonic Academy. Already at that time Cosimo had chosen Ficino, who was only six years old, for a role in this project and had prepared him for it by an appropriate education.

Studying in Florence and Bologna

Ficino studied artes liberales and medicine in Florence. His teachers included the humanist Cristoforo Landino and the scholastic Aristotle commentator Niccolò Tignosi, who taught theoretical medicine and Aristotelian philosophy. During this period, Ficino acquired a good command of the scholastic method and terminology, which later appeared in his works, and acquired a sound knowledge of Aristotle. His main interest, however, was Plato’s teaching, which he summarized in 1456 in a compendium entitled Institutiones ad Platonicam disciplinam. At that time, however, he could not yet read the original of Plato and was therefore dependent on the modest knowledge of Latin sources. Cosimo and Landino advised him to learn Greek first. In 1457 he wrote a treatise on Lust, in which he described the views of the various philosophical directions on Lust. Then, according to his biographer Corsi, he went to Bologna to continue his medical studies. However, he did not achieve a degree, but later practised as a doctor.

“The rational soul in a certain manner possesses the excellence of infinity and eternity. If this were not the case, it would never characteristically incline toward the infinite. Undoubtedly this is the reason that there are none among men who live contentedly on earth and are satisfied with merely temporal possessions.”
– Marsilio Ficino, Five Questions Concerning the Mind (1495)

After his studies, Ficino spent the rest of his life in his homeland, where Cosimo generously supported him and provided him with the material basis for a life dedicated entirely to philosophy and theology. He concentrated on his goal, the development of the main sources of ancient Platonism accessible in Western Europe when, during and after the fall of the Byzantine Empire, numerous Greek manuscripts of ancient texts arrived in Italy. Initially, Ficino’s main task was to produce the first complete Latin translation of Plato’s dialogues requested by Cosimo. He was able to present ten dialogues while the client was still alive; a few days before Cosimo’s death he read them to him. He also commented on Plato’s dialogues Parmenides, Sophistes, Philebos, Timaios and Phaidros. In 1496 he published an edition of his collected Plato commentaries (with the exception of the Symposion commentary, which had already appeared in 1484). 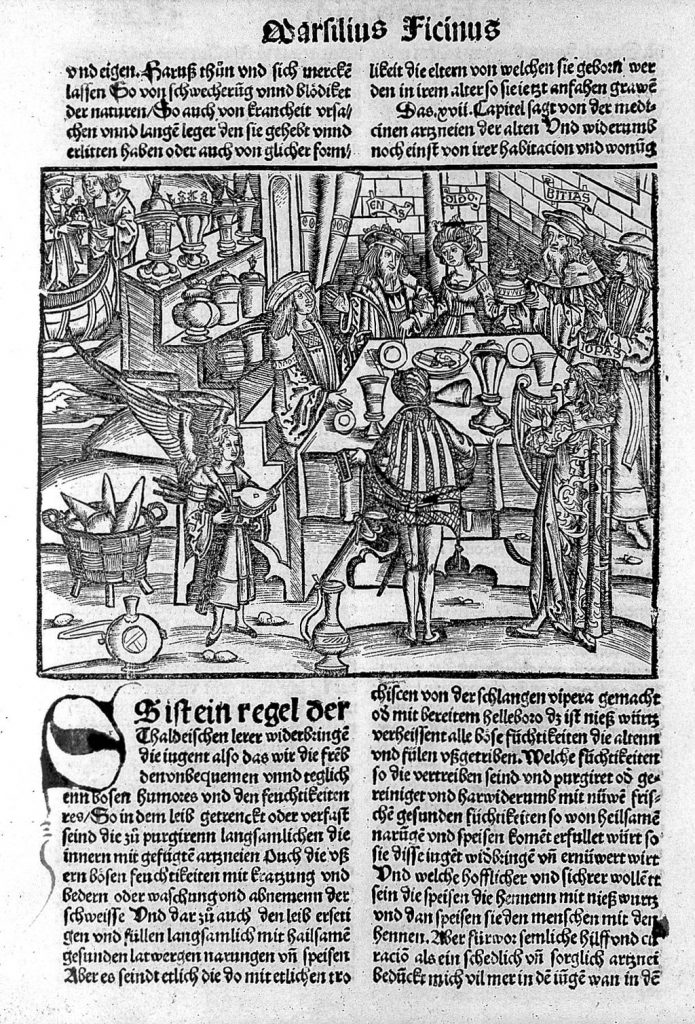 In the young scholar Giovanni Pico della Mirandola,[4] Ficino found a kindred spirit who shared some of his basic beliefs, but also strongly contradicted them. In 1484 Pico encouraged him to translate the Enneads of the ancient Neolatonist Plotin. After two years this work was finished; afterwards Ficino devoted himself to the Plotin commentary. The entire result of these efforts was printed in 1492. In addition, Ficino translated and commented on other ancient writings, much of which came from the Platonist, Neo-Platonist and Pythagorean traditions. Among the works he made accessible to Latin-speaking scholars were the writings traditionally attributed to the mythical Hermes Trismegistos, which form the Corpus Hermeticum. These treatises, which he translated into Latin in 1463 on Cosimo’s order, he regarded as an Egyptian variant of the Platonic wisdom doctrine. In addition to Plotin, he also made later Neoplatonists known; he translated some of their works (including a treatise by Iamblichus, known under the title On the Mysteries of the Egyptians or published excerpts in Latin translation (he did so with writings by Porphyry, Synesios and Proclus). He also translated two writings of the extraordinarily influential late classical Christian Neoplatonist Pseudo-Dionysius Areopagita into Latin and Dante‘s state theoretical work De monarchia into Italian.[5]

Unlike many Renaissance humanists, Ficino was not primarily a literary scholar, philologist and cultural historian, because his interest was not so much in the linguistic form of ancient works as in their philosophical content. His main concern was a contemporary renewal of ancient philosophy. Its core for him was Plato’s teaching, which he interpreted in the sense of the neoplatonic tradition founded by Plotin. Like many medieval thinkers, but on a much broader and more solid basis than they, he sought to understand ancient Platonism in a way that would harmoniously combine it with the fundamental beliefs of Christianity. With his striving for a consistent metaphysical view of the world, in which theological and philosophical statements were to merge into an indissoluble unity, he joined the more Christian-influenced current of humanism.

However, the centuries-old claim that a Platonic Academy led by Ficino was founded in Careggi at the instigation of Cosimo is inaccurate. This assumption, which can still be found today in many reference books, has been proved wrong by recent research. In reality, the term “Platonic Academy” for Ficino’s circle of friends is an invention of the 17th century, and he used the term “academician” to describe his numerous students, without associating it with the idea of an institutional framework. Of the personalities he ranked among his “academics”, relatively few shared his enthusiasm for Plato and his hostility to contemporary Aristotelism.

In 1473 Ficino was ordained priest. He was ordained priest and received several feces, some of them before his ordination. In 1487 he became canon at the cathedral of Florence. At that time his patron Lorenzo de’ Medici even tried in vain to make him bishop of Cortona. With the assumption of ecclesiastical tasks, to which preaching belonged, an increased interest of Ficino in specific theological topics connected, whereby he remained however faithful to his Platonic basic orientation.

With the death of the statesman Lorenzo il Magnifico in 1492 the epoch ended in which Florence was the most important centre of humanistic intellectual life in Italy, and with it also the long time which had offered optimal conditions for Ficino’s work. In the period that followed, serious political and religious upheavals with violent clashes began. The Medici were expelled from the city, and in 1494 the invasion army of the French King Charles VIII occupied the city. Florence, and finally with the Dominican monk Girolamo Savonarola a sharp anti-humanistic direction came to power.[6] Under these circumstances, Ficino’s concept of a humanistic Christianity in the neoplatonic spirit no longer found a favourable breeding ground. After the execution of Savonarola in May 1498, Ficino wrote a defense pamphlet against him in which he noted with satisfaction that the divine mercy had fortunately recently “liberated” the city from this plague. 13] On October 1, 1499, he died in his villa in Careggi.