You are here: Home › astronomy › Giordano Bruno and the Wonders of the Universe 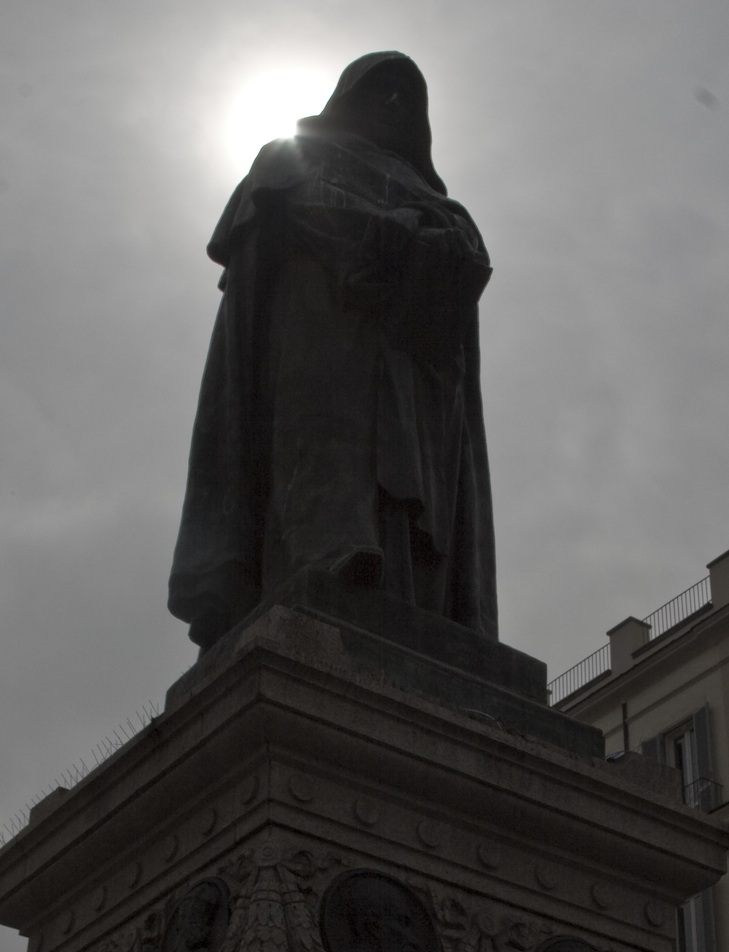 On February 17, 1600, Dominican friar and philosopher Giordano Bruno was burned on the stake after the Roman Inquisition found him guilty of heresy. His cosmological theories went beyond the Copernican model in proposing that the Sun was essentially a star, and moreover, that the universe contained an infinite number of inhabited worlds populated by other intelligent beings.

Giordano Bruno was born as Filippo Bruno in Nola,  in the Kingdom of Naples, in 1548 as the son of Giovanni Bruno, a soldier, and Fraulissa Savolino. In his youth he was sent to Naples for education, where he was tutored privately at an Augustinian monastery and attended public lectures at the Studium Generale. At the age of 17, he entered the Dominican Order at the monastery of San Domenico Maggiore in Naples, taking the name Giordano. In 1572 he finished his novitiate and became ordained priest.

Of Infinity, the Unniverse, and the World

Giordano’s exceptional expertise in the art of memory brought him to the attention of patrons, and he was brought to Rome to demonstrate his abilities to the Pope. His memory enhancement techniques, described in his book “The Art of Memory” are still used today. Though outspoken, and perhaps, not truly appreciated while in the Dominican Order, Giordano’s troubles truly began around 1584 with the publication of his book “Dell Infinito, universo e mondi” (“Of Infinity, the Universe, and the World“). Being a philosopher and not an astronomer, Giordano Bruno would not have even warranted our attention if not for this book and the consequences of it. Hearing the ideas of Nikolaus Copernicus about the nature of the universe sent Giordano Bruno into a veritable frenzy of philosophical thought. If the Earth was not the center of the universe, and all those stars clearly seen in the night sky were also suns, then there must exist an infinite number of earths in the universe, inhabited with other beings like ourselves.

“The universe is then one, infinite, immobile…. It is not capable of comprehension and therefore is endless and limitless, and to that extent infinite and indeterminable, and consequently immobile”
– Giordano Bruno, Teofilo, in Cause, Principle, and Unity, “Fifth Dialogue,” (1588), ed. and trans. by Jack Lindsay (1962).

Of course Bruno was aware that this contradicted the Biblical version of the universe, but he put forward the same argument as Galileo Galilei would some years later [4], namely that the Bible should be seen as providing moral teaching, not the teaching of physics. In his writings Bruno also argues that Christianity is a religion which is held through faith, not through philosophical or scientific reasoning. Moreover, Bruno’s teachings that different Christian Churches should be allowed to coexist and that they should respect each others views does not look to our eyes a major crime but it did not go down well in the religious climate which then prevailed. Bruno was invited to return to Italy and, thinking that the Catholic Church was now more tolerant following the death of the strict Pope Sixtus V, he accepted. Many believe that the invitation was a trick to bring him before the Inquisition, and Bruno fell for it.

“Everywhere there is incessant relative change in position throughout the universe, and the observer is always at the centre of things.”
– Giordano Bruno, Cause, Principle, and Unity (1584)

Returning to Italy, Bruno went first to Padua, where he taught briefly, and applied unsuccessfully for the chair of mathematics, that was assigned instead to Galileo Galilei one year later. Accepting an invitation to Venice from the patrician Giovanni Mocenigo, Bruno moved to Venice in March 1592. For about two months he functioned as an in-house tutor to Mocenigo. When Bruno announced his plan to leave Venice to his host, the latter, who was unhappy with the teachings he had received and had apparently developed a personal rancour towards Bruno, denounced him to the Venetian Inquisition, that had Bruno arrested on May 22, 1592. Among the numerous charges of blasphemy and heresy brought against him in Venice, based on Mocenigo’s denunciation, was his belief in the plurality of worlds, as well as accusations of personal misconduct. Bruno defended himself skillfully, stressing the philosophical character of some of his positions, denying others and admitting that he had had doubts on some matters of dogma.

The Roman Inquisition, however, asked for his transferal to Rome, where he was imprisoned for seven years during his lengthy trial, lastly in the Tower of Nona. Some important documents about the trial are lost, but others have been preserved, among them a summary of the proceedings that was rediscovered in 1940. The Pope expressed himself in favor of a guilty verdict. Consequently, Bruno was declared a heretic, handed over to secular authorities on February 8, 1600. At his trial he listened to the verdict on his knees, then stood up and said:

“Perhaps you, my judges, pronounce this sentence against me with greater fear than I receive it.“

A month or so later he was brought to the Campo de’ Fiori, a central Roman market square, his tongue in a gag, tied to a pole naked and burned at the stake, on February 17, 1600.

The Aftermath of Bruno’s Trial

The Vatican has published few official statements about Bruno’s trial and execution. In 1942, Cardinal Giovanni Mercati, who discovered a number of lost documents relating to Bruno’s trial, stated that the Church was perfectly justified in condemning him. On the 400th anniversary of Bruno’s death, in 2000, Cardinal Angelo Sodano declared Bruno’s death to be a “sad episode” but, despite his regret, he defended Bruno’s prosecutors, maintaining that the Inquisitors “had the desire to serve freedom and promote the common good and did everything possible to save his life“. In the same year, Pope John Paul II made a general apology for “the use of violence that some have committed in the service of truth“.

Woodcut illustration of one of Giordano Bruno’s mnemonic devices: in the spandrels are the four classical elements: earth, air, fire, water

A “Martyr of Science”?

Some authors have characterized Bruno as a “martyr of science,” suggesting parallels with the Galileo affair which began around 1610. Other scholars oppose such views, and claim Bruno’s martyrdom to science to be exaggerated, or outright false. According to historian Mordechai Feingold [9], “Both admirers and critics of Giordano Bruno basically agree that he was pompous and arrogant, highly valuing his opinions and showing little patience with anyone who even mildly disagreed with him.” According to the Stanford Encyclopedia of Philosophy [8], “in 1600 there was no official Catholic position on the Copernican system, and it was certainly not a heresy. When […] Bruno […] was burned at the stake as a heretic, it had nothing to do with his writings in support of Copernican cosmology.”