You are here: Home › art › The Letters of Giambattista Bodoni 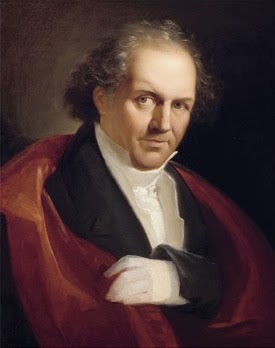 On February 16, 1749, Italian typographer Giambattista Bodoni was born. He also was a type-designer, compositor, printer and publisher. Bodoni designed many type-faces, each one in a large range of type sizes. He is even more admired as a compositor than as a type-designer, as the large range of sizes which he cut enabled him to compose his pages with the greatest possible subtlety of spacing.

In his early working years, Bodoni was apprenticed in the Roman Catholic Church’s printing house. He earned a great reputation through working extremely hard and mastering several languages and types, especially ancient languages. Soon, Giambattista Bodoni became a leader of originating pseudoclassical typefaces in Italy, after Baskerville became famous in Britain and Didot in France. The Duke Ferdinando of Bourbon-Parma announced in 1768, that Bodoni should organize a printing house in Parma, which was then called the Royal Printing House. 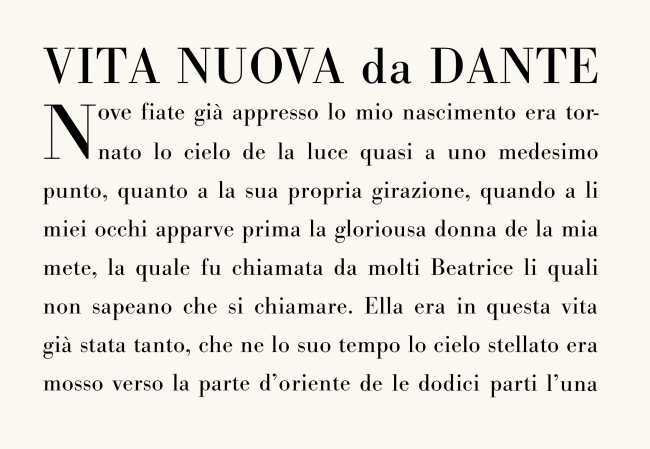 Facsimile of lines from Dante’s “La Vita Nuova” first published with Bodoni types by the Officina Bodoni in 1925. Actual font is the digital Bodoni Monotype published in 1999.

The books Bodoni published were incredibly well received and he went on with classical and highly respected works like those of Homer. In the years following 1791, Bodoni produced much of his greatest work, including the great classics of Horace, Virgil, Anacreon, Tasso, and Homer, among others. Napoleon was so delighted with the gift of Bodoni’s Iliad that he made him a Chevalier of the Order of the Reunion and gave him a pension for life. A few years later, Bodoni had become so successful, that he was allowed to open his own printing house that beared his name, ‘Officina Bodoni’. He started teaching his art and skills as well. Under his students were the Amoretti Brothers with whom he became good friends. Unfortunately, a serious disagreement between the brothers and their master established, wherefore they opened their very own type foundry in Italy and became quite famous themselves.

Bodoni achieved an unprecedented level of technical refinement, allowing him to faithfully reproduce letterforms with very thin “hairlines”, standing in sharp contrast to the thicker lines constituting the main stems of the characters. He became known for his designs of pseudoclassical typefaces and highly styled editions some considered more apt “to be admired for typeface and layout, not to be studied or read.” His printing reflected an aesthetic of plain, unadorned style, combined with purity of materials.

Bodoni’s success and popularity soon surpassed famous French typographers like Pierre Simon Fournier, but as much as his work was admired, his highly styled editions were often considered more apt “to be admired for typeface and layout, not to be studied or read.” Bodoni worked hard on his technical refinement throughout the years and was able to reproduce letterforms with very thin hairlines, standing in sharp contrast to the thicker lines constituting the main stems of the characters. Bodoni’s fame became comparable to that of today’s rock star. Visitors flocked to his print works on the banks of the river Parma, wanting a glimpse of him working in his studio. Benjamin Franklin, a printer himself, wrote a fan letter.[4]

Before his death on 30 November 1813, Bodoni had started work on a series of French classics for his new patron, Joachim Murat, Napoleon’s brother-in-law. The Théatre Complet de Jean Racine was on the press on the day of his death. It would be up to Bodoni’s widow to complete the series..

At yovisto academic video search, you may enjoy a short introduction into the history of typography.