You are here: Home › mathematics › The Marquis de L’Hôpital and the Analysis of the Infinitely Small

Hôpital came from a distinguished noble family. His father Anne-Alexandre de l’Hospital (Comte de Sainte-Mesme and Duc d’Orléans, died 1701) was a royal lieutenant general and connected to the House of Orleans (through Gaston d’Orleans). His mother was Elisabeth Gobelin, formerly Maid of Honor to the Grand Duchess of Tuscany and daughter of the Councillor of State and Secretary of State Claude Gobelin. Hôpital took an early interest in mathematics and showed mathematical aptitude. He solved a problem by Blaise Pascal [3] on the cycloid at the age of 15, which came up in conversation discussing mathematics with the Duke of Roannès and a Mr Arnaud.  Given his family background it is not surprising that Guillaume de l’Hôpital followed a military career and served as a captain in a cavalry regiment. He gave up the post because of nearsightedness being unable to see beyond ten paces, but mainly to pursue mathematical studies.

Bernoulli, Malebranche and the Paris Circle

In Paris around 1690 he belonged to the circle of the philosopher and mathematician Nicolas Malebranche.[4] There he also met Johann I. Bernoulli when the latter visited Paris in 1691 and gave lectures for Malebranche’s circle about the latest mathematical developments including the infinitesimal calculus newly developed by Leibniz. [5] Bernoulli agreed to give four lectures a week to Malebranche’s circle and he did so for the next six months. Hôpital attended these lectures but then moved from Paris to his estate at Oucques (Canton Marchenoir) where he employed Bernoulli to give him private lessons.[1] By November 1692 Bernoulli had left Oucques and returned to Basel from where he carried out a correspondence with l’Hôpital. Hôpital even paid Johann Bernoulli to send him new results exclusively.[9] 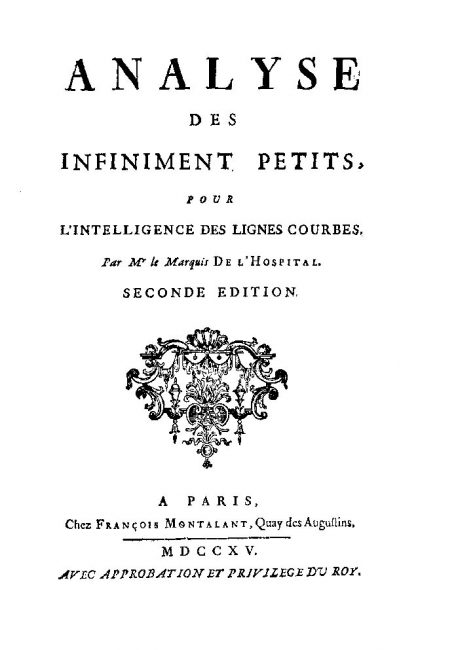 The First Textbook on Calculus

On 1 September 1695 Johann Bernoulli left Basel to take up a new appointment as professor of mathematics at Groningen. In 1696 Hôpital published Analyse des infiniment petits pour l’intelligence des lignes courbes (Analysis of the infinitely small for the intelligence of curved lines) the first textbook on differential calculus. It contains writings of his teacher Johann Bernoulli. In a preface Hospital expresses his gratitude to the Bernoullis and Leibniz, but at the same time claims to have developed the fundamentals of the presentation of differential calculus in his book himself. His textbook was very influential and saw editions until 1781, and was commented on by Pierre de Varignon, among others. Johann Bernoulli himself did not claim to have written large parts of the book himself until after Hospital’s death. It was not until the 20th century that the manuscripts of Bernoulli’s lectures in Paris, which Hôpital followed in his book, and his financial arrangements with Hôpital became known.

Because of his noble status, he could not easily join the Academie des Sciences, but was given an honorary position (vice president) when it was reorganized in 1699. He corresponded with Leibniz and Christian Huygens,[6] among others, whom he introduced to the new infinitesimal calculus. The rule for the evaluation of a fraction whose numerator and denominator both have a limit value of zero is named after L’Hôpital. However, it is believed that the rule was discovered by Johann Bernoulli.

At the beginning of 1704, he was taken by a fever that at first seemed in no way dangerous but which determined a stroke, from which he died the next day, February 2, 1704. His relatives attributed his death to an excessive practice of mathematics. At his death, he left the manuscript for another book (Traité analytique des sections coniques et de leur usage pour la résolution des équations dans les problèmes tant déterminés qu’indéterminés, An analytical treatise on conic sections and their use in solving equations in both determinate and indeterminate problems), this time on integral calculus, which appeared in 1707 and in a second edition in 1720. He had abandoned plans to publish the book during his lifetime after hearing of a plan by Leibniz to publish a book on it himself.