You are here: Home › philosophy › Nicolas Malebranche’s Dualism of Religion and Science 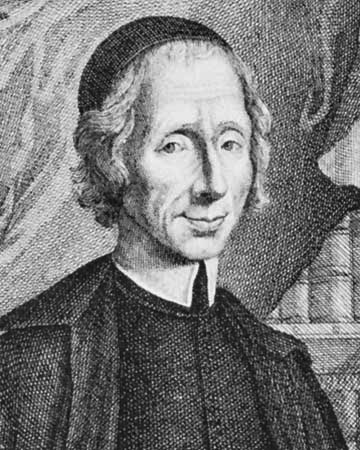 On August 6, 1638, French priest and rationalist philosopher Nicolas Malebranche was born. Malebranche sought to synthesize the thought of St. Augustine and Descartes, in order to demonstrate the active role of God in every aspect of the world. Malebranche is best known for his doctrines of Vision in God, Occasionalism and Ontologism.

“I am not my own light unto myself.”
– Nicholas Malebranche, Dialogues on Metaphysics (1688)

Malebranche’s father was royal councillor, his mother Catherine de Lauson came from the lower aristocracy, her brother Jean de Lauson was governor of Canada. He was the youngest son of a large family and from an early age of tender constitution, so that he only began his studies of philosophy at the College de Marche of the University of Paris at the age of 16. He studied with the Aristotelian M. Rouillet and graduated in 1654. He then studied theology for three years at the Sorbonne.

From Ecclestical History towards the Search of Truth

In 1660 he entered the Oratory where he studied ecclesiastical history and linguistics as well as the Bible and the works of Saint Augustine.[4] In 1664 he became a priest. It is believed that around 1664, Malebranche read Descartes‘ Treatise on Man and that he was then highly influenced by it.[5] The work allowed Malebranche to view the natural world without Aristotelian scholasticism. He spent the next decade studying the Cartesian system. In 1674 he became an official professor of mathematics at the Oratorian Seminary, but he had already had students like Jean Prestet, whose Elements of Mathematics he published in 1675, following Cartesian philosophy (the connection was so close that John Wallis considered the book a work of Malebranche).

“I am unable, when I turn to myself, to recognize any of my faculties or my capacities. The inner sensation which I have of myself informs me that I am, that I think, that I will, that I have sensory awareness, that I suffer, and so on; but it provides me with no knowledge whatever of what I am — of the nature of my thought, my sensations, my passions, or my pain — or the mutual relations that obtain between all these things … I have no idea whatever of my soul.”
– Nicholas Malebranche, Dialogues on Metaphysics (1688) Dialogue III

During the 1670s, Malebranche published the two volumes of his first and most extensive philosophical work, titled De la recherche de la vérité (Concerning the Search after Truth). In it, Malebranche discussed the nature of the human mind and the use that must be made of it to avoid error in the sciences. In his third book, Malebranche defended a claim that the ideas through which we perceive objects exist in God. However, the works appeared due to difficulties with censorship only from 1674.

The Idea of Intellegible Extension

Abbé Simon Foucher became one of Nicolas Malebranche first critics and after his ‘attack’ on Malebranche’s first volume, he added about 50% to the book with a sequence of seventeen elucidations. Malebranche developed the theory of ‘intelligible extension‘, a single, archetypal idea of extension into which the ideas of all particular kinds of bodies could be jointly resolved. Malebranche placed a greater emphasis than he had previously done on his occasionalist account of causation, and particularly on his contention that God acted for the most part through ‘general volitions’ and only rarely, as in the case of miracles, through ‘particular volitions’. He expanded these ideas in his 1680 ‘Treatise on Nature and Grace‘. In it, Malebranche made it explicit that generality of the laws whereby God regulated. His behavior extended not only to His activity in the natural world but also applied to His gift of grace to human beings.

It arose out of discussions with Antoine Arnauld (also a Kartesian and Jansenist), who sharply criticized the book on its publication, from which a dispute of several years developed. At the instigation of Arnauld’s followers, his Traité (1690) was even put on the papal index in 1690, as was his main work Recherche in 1709. But Malebranche not only had critics, he was highly respected in his time as a philosopher, for example Pierre Bayle called him one of the greatest philosophers of his time in his philosophical dictionary.[6]

From Saint Augustine to Descartes

Malebranche followed Augustine in his description of intellectual knowledge and he became a follower of Descartes in his approach to mind-body problems. Descartes considered it possible to form a clear and distinct idea of the mind. In contrast, Malebranche argued in the ‘Dialogues on Metaphysics‘, a dialogue between Theodore and Aristes, that we do not have a complete conception of the powers of the mind, and thus no clear conception of the nature of the mind.

“As to bad faith, Malebranche might argue
it rests with inattention. Stupidity
is not admissible. However the status
of apprehension remains an issue”
– Geoffrey Hill, The Triumph of Love XIV.1-4

Early in mathematics, Malebranche patronized L´Hospital, who wrote one of the earliest textbooks of analysis, which he got to know like Malebranche in the early 1690s by Leibniz and Johann Bernoulli. In discussion with Leibniz, Malebranche also developed his ideas on dynamics (including elastic shocks, but also optics and gravity) in the 1690s. These works led to his admission to the Académie des sciences in 1699.

Stephen Nadler, Leibniz and Malebranche on the problem of evil, [11]