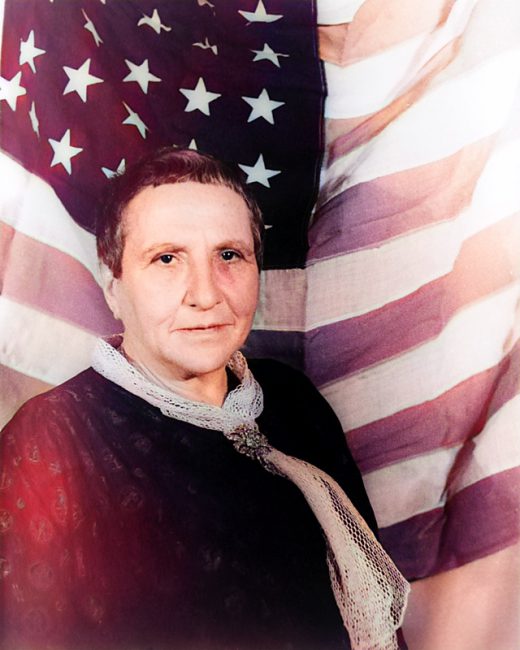 On February 3, 1874, American writer, publisher, and art collector Gertrude Stein was born. Gertrude Stein, like Virginia Woolf,[1] is one of the first women of classical literary modernism. She wrote experimental novels, novellas, essays, poems, literary portraits, and stage works in which she defied linguistic and literary conventions, so that many critics and readers found her work too difficult, were amused by it, or ignored it.

“I am writing for myself and strangers. This is the only way that I can do it.”
– Gertrude Stein: The Making of Americans (1925)

Gertrude Stein was born in Allegheny, today Pittsburgh PA, USA, as the youngest of five children into a wealthy and highly respectable middle-class family. Gertrude’s father, Daniel Stein, was the son of German Jewish emigrants, her mother Amelia, née Keyser, was also German Jewish. German and English were spoken in the family. After living in Vienna and Passy near Paris, Gertrude grew up in California. When in 1891, three years after the death of her mother in 1888, her father Daniel Stein also died, the eldest brother Michael became guardian for the younger siblings.

“From the very nature of progress, all ages must be transitional.”
– Gertrude Stein, “Form and Intelligibility,” from The Radcliffe Manuscripts (1949); written in 1894 as an undergraduate at Radcliffe College

In the fall of 1893, Gertrude Stein followed her brother Leo to Cambridge (USA) for study purposes. She studied biology and philosophy at Radcliffe College, Harvard’s department for women. She attended lectures and belonged to the inner circle of psychologist and philosopher William James, whose term stream of consciousness was to influence her work. James’ brother Henry James [2] made “stream of consciousness” a narrative principle in his novels, which should shape the writing style of classic modernist authors such as Virginia Woolf and James Joyce.[3] From 1897, this was followed by studies in psychology and medicine at Johns Hopkins Medical School in Baltimore, to which Leo Stein had transferred to study biology. Gertrude Stein entered a society that challenged aesthetic and moral rules of the Puritan bourgeoisie. She had a long-running affair at the university with a fellow student, May Bookstaver, who inspired Stein to write a short novel, Q. E. D. (Quod erat demonstrandum). Written in 1903, it was only published posthumously in 1950 under the title The Things as They Are.

Gertrude Stein began to grow bored with her medical studies, and after failing exams, she dropped out after her brother Leo traveled to Europe in 1900 to study art. After a stay in the United States, Stein followed her brother to Europe for good in 1903. In Paris, they both opened a salon in their shared apartment at 27 rue de Fleurus, which became a center for the literary and painterly avant-garde. The salon was one of the most important meeting places of the Parisian artistic scene, and there was a lively exchange between painters and writers. The painters Matisse [4] and Picasso  [5] first met in Gertrude and Leo Stein’s salon. Leo Stein had met Picasso in 1905 through the mediation of Henri-Pierre Roché. In the fall of 1906, the painter completed the portrait of Gertrude Stein, for which she had sat for months in his studio, the Bateau-Lavoir. During the long sessions – there were about 80 to 90 – the friendship between Picasso and Stein strengthened. Stein wrote literary portraits about him, and their correspondence continued until 1944.

Alice B. Toklas and First Publications

In 1907, Gertrude Stein met the American Alice B. Toklas; like herself, Toklas also came from a middle-class Jewish family. A year later, in 1908, Stein hired her as a secretary. Toklas became Stein’s companion and muse; at the same time she was secretary, editor, and cook. She always kept herself in the background. In 1909, Stein published her first book, Three Lives, at her own expense, as she could not find a publisher interested in her work. It contained three novellas, including Melanctha, one of Stein’s best-known texts. In August 1912, a special issue of Alfred Stieglitz‘s [6] photography magazine Camera Work featured Stein’s verbal cubist “word portraits” of Henri Matisse and Pablo Picasso as its first publication in the United States. The essays were later included in the book Portraits and Prayers, published by Random House in 1934.

Leo Stein left the shared apartment in 1913 because he no longer wanted to tolerate living with Alice B. Toklas and did not share Gertrude’s preference for Cubism. His aversion to Picasso’s paintings began with his appraisal of Les Demoiselles d’Avignon, and he found his sister’s writing inferior and unconvincing. Gertrude Stein and Alice B. Toklas now carried on alone the invitations to the Salon as a jour fixe of Saturday evenings. The daily routine changed from then on: in the afternoon Stein received visitors or visited friends, and after dinner she wrote her texts until the early morning hours.

In 1908, Gertrude Stein met the music and art critic and photographer Carl Van Vechten in Paris. He became her patron, reviewing her works in the specialized press and making efforts to find a publisher for her unpublished works. A lifelong friendship and extensive correspondence developed between them. Shortly before the outbreak of World War I in 1914, Gertrude Stein’s collection of texts Tender Buttons, with which she had increasingly turned to experimental literature by attempting to transfer the cubist style of painting to language as a literary equivalent, was published by Claire Marie in New York.  Stein’s most famous phrase, “Rose is a rose is a rose is a rose,” a tautology written in 1913 as part of the poem Sacred Emily, appeared in the book Geography and Plays, published in 1922. In the poem, the first-mentioned “rose” is the name of a person. Stein later varied the phrase in other works, for example, she wrote “A rose is a rose is a rose” in Lectures in America in 1935. It is often interpreted as “things are what they are.” For Stein, the phrase expressed that the name of a thing embodies its image and the feelings associated with it.[68] With this interpretation, Stein seamlessly ties in with the Problem of Universals, in which “the name of the rose” was used by Peter Abaelard and others as an example of the link between concept and object.

Hemingway and the Lost Generation

“All of you young people who served in the war. You are a lost generation.”
– Gertrude Stein, quoted by Ernest Hemingway in A Moveable Feast (1964)

After the war, there were new visitors to Stein’s salon. Many friends and acquaintances had died in the war or no longer visited. New artists came to Paris. Stein coined the term “Lost Generation” during this time. Ernest Hemingway describes in retrospect how it came about in his novel A Moveable Feast. He had met Gertrude Stein in Paris in 1922, where he was working as a foreign correspondent for the Toronto Star newspaper. In this work, Hemingway portrays Gertrude Stein as very fat, not tall, and heavily built like a peasant woman. Stein had encouraged Hemingway to give up journalism and use his talents as a writer. His unadorned sentences and narrative style testify to her influence. Hemingway, in turn, read proofs of her work The Making of Americans and lobbied for a preprint. Stein and Toklas became godmothers to his first son, John, in 1923, and their friendship broke down in 1926 partly because Hemingway parodied a work by mutual friend Sherwood Anderson – in it, too, a parody of her novel The Making of Americans. Stein retaliated by portraying him unflatteringly in her first autobiography, The Autobiography of Alice B. Toklas (1933). Hemingway responded by sending her his book Death in the Afternoon with the dedication, “A bitch is a bitch is a bitch.”

In 1931, Alice Toklas founded Plain Edition to market Stein’s work; for example, How to Write, an introduction to Stein’s writings, was published that same year. Stein’s most successful work, the Autobiography of Alice B. Toklas, in which she recounts her life, her friendships with now famous artists such as Picasso and Matisse and writers such as Hemingway and F. Scott Fitzgerald, and musicians such as George Gershwin, appeared in 1933. Beginning in October 1934, Gertrude Stein and Alice B. Toklas undertook a long, successful lecture tour of the U.S. that lasted until May 1935. In 1937, Random House in New York published the sequel to her Autobiography of Alice B. Toklas under the title Everybody’s Autobiography, in which she reports on the success of the previous volume and on her extended trip to America. However, the sequel was unable to match the success of the first work. In 1938, an essay on Picasso was published, and the following year, a children’s book, The World is Round, was published by one of the first publishers of children’s books, Young Scott Books, New York. The World Is Round tells the story of a girl, Rose, who is trying to find out if the world is round. The girl carves her name Rose around a tree. The writing again echoes Stein’s most famous phrase, “Rose is a rose is a rose is a rose.”

“Communists are people who fancied that they had an unhappy childhood.”
– Gertrude Stein, quoted by Thornton Wilder, interview (December 14-15, 1956)

The outbreak of World War II caught Stein and Toklas by surprise at their vacation home in Billignin. Stein’s lack of realism about the war was demonstrated by the fact that in 1941 she translated Marshal Pétain‘s speeches Paroles aux Français and wrote a preface in which she described him as a courageous politician who wanted to save France and who was unjustly seen in a bad light by the United States. However, the book was never published. When Stein and Toklas received notice to quit their house in Billignin in 1943, they moved to Culoz to the house of Le Colombier, rejecting a return to the United States. When they went to Culoz town hall to register, Justin Hey, the mayor, refused on the grounds that they were too old to endure the rigors of concentration camps. Despite their Jewish origins, the couple maintained good relations with the Vichy regime during the occupation of France in World War II and thus survived the German occupation largely unmolested.

When the first American soldiers arrived in Culoz on September 1, 1944, Stein invited them to dinner and debated with them. The couple returned to Paris in December. After Stein wrote Wars I Have Seen, her third biography, based on diary entries from 1943/1944, she accepted an invitation from Life magazine in June 1945 to visit American bases in Germany, Belgium, and Austria. A year later, she wrote Brewsie and Willie, which focused on conversations with the soldiers. Gertrude Stein died of stomach cancer on July 27, 1946 in Neuilly-sur-Seine in the American Hospital, her grave is in the Cimetière du Père Lachaise cemetery. Many friends and her brother Leo Stein learned of her death only from the newspaper.

Gertrude Stein as an Author

With her extroverted manner, Gertrude Stein was one of the cult figures of the art and literature scene of her time. With her writings, she counts among the avant-garde of the 20th century. By her own admission, she wanted to translate the cubism of abstract painting into literature through a style characterized by constant repetition of words (tautology). Critics accused her of wanting to escape the effort of thoroughly revising her texts on her own, and of trying to exaggerate this literarily in retrospect.

Episode 5: The Autobiography of Alice B. Toklas (Gertrude Stein), [12]