You are here: Home › explorer › On the Road with Alexander von Humboldt 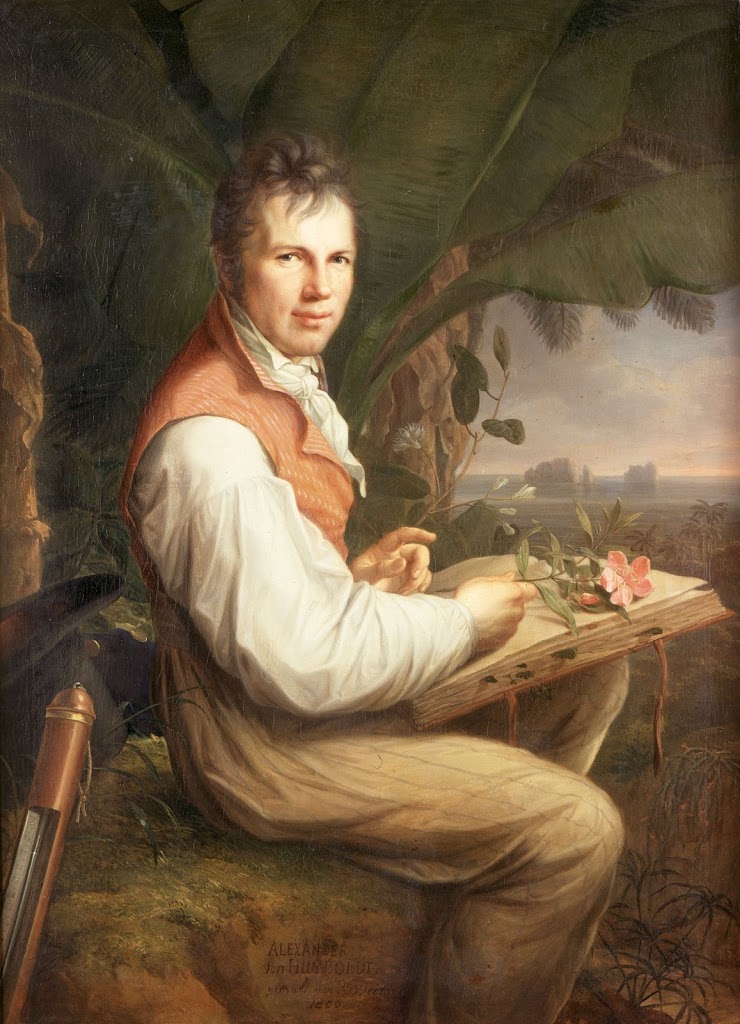 A portrait of Alexander von Humboldt by Friedrich Georg Weitsch (1806)

“I am more and more convinced that our happiness or unhappiness depends more on the way we meet the events of life than on the nature of those events themselves”. – Alexander von Humboldt

Actually, Humboldt did not make this journey all alone. He had a companion, Aimé Bonpland. But today, almost nobody will remember Bonpland. Being an explorer as well as a botanist, Bonpland worked together with Humboldt during five years of travel in Mexico, Colombia and the districts bordering on the Orinoco and Amazon rivers. In these explorations Bonpland collected and classified about 60,000 plants that were, until then, mostly unknown in Europe. Nevertheless, all the world is talking about Humboldt, hardly anybody has ever heard of Bonpland. To change this fact, you definitely should read Daniel Kehlmann‘s  ‘Measuring the World‘ (Die Vermessung der Welt). Well, not only because of this fact, but also because it is a worth while reading!

BTW, if you seriously watch the portrait of Humboldt on the right by Friedrich Georg Weitsch from 1806, there is a slight resemblance of Humboldt with the young Captain Kirk (William Shatner). Thinking of Shatner, this opens up a completely new view on Humboldt. ‘To boldly go where no man has gone before…‘ I think maybe Daniel Kehlman has also remarked this similarity, when portraying von Humboldt in his novel. 🙂 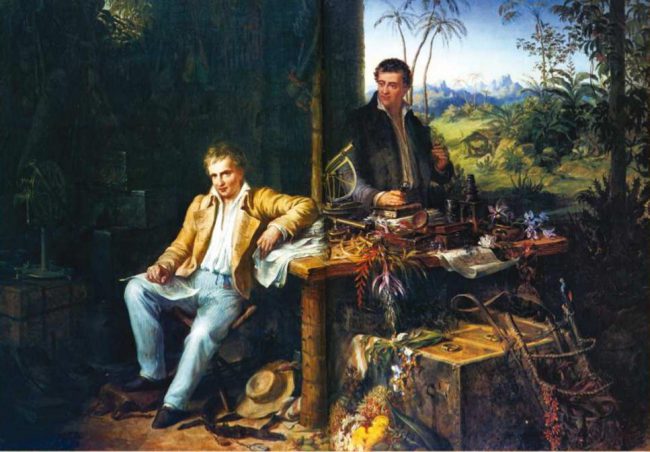 Alexander von Humboldt and Aimé Bonpland in the Amazon jungle.

“Being, in its scope and inner being, is fully recognized only as having become.”
– Alexander von Humboldt, Kosmos, First Volume, J. G. Cotta’scher Verlag, Stuttgart and Tübingen 1845, p. 64,

Alexander von Humboldt was born in Berlin on 14 September 1769 to a Prussian military father, Major Alexander Georg von Humboldt, and a mother of French and Huguenot origin, Marie-Élisabeth widow of Holwede born Columbus. He is the younger brother of Wilhelm von Humboldt, linguist, civil servant, diplomat, Prussian minister and German philosopher. He was a visionary for research and pedagogy and founded Humboldt University in Berlin in 1810.[7] The brothers received a universal education by Gottlob Johann Kunth (1757-1829) in history, German, mathematics, Latin, Greek and French. From 1785 they were prepared for university studies by subject teachers such as Christian Wilhelm von Dohn (economist; 1751-1820), Ernst Ferdinand Klein (lawyer; 1743-1810) and Johann Jakob Engel (philosopher; 1741-1802).

Humboldt studied one semester with his brother Wilhelm fiscal accounting (economics, finance and administration) at the University of Frankfurt/Oder. He then returned to Berlin and studied with the botanist Karl Ludwig Willdenow (1765-1812).  Accompanied by the botanist Steven Jan van Geuns (1767-1795), he undertakes his first study trip from Göttingen via Speyer to Mainz, where he visits the natural scientist and well-known travel writer Georg Forster (1754-1794).[8]  In 1790, Humboldt published his first work “Mineralogische Beobachtungen über einigen Basalte am Rhein“. He finishes his studies in Göttingen and went to Mainz. From there he embarked on his first research expedition accompanied by Forster. They travel via Cologne and Brussels to Amsterdam and transfer to England. In London Humboldt met famous explorers such as the botanist Joseph Banks (1743-1820), who accompanied James Cook (1728-1779) on his first circumnavigation of the world.[9] These impressions confirm Humboldt’s plans for a research trip to Central and South America. They travel back via Paris, where Humboldt witnessed the revolutionary events. Humboldt was fascinated by the French Revolution of 1789 and its political ideas.

In May 1791 Humboldt applied for employment with the Prussian chief miner of Heinitz, thus starting his career in the civil service as a mining official, which was to be preceded by studies at the Freiberg Mining Academy. He completed the workload, normally planned for three years, in eight months. On 6 March 1792 he received a patent as a mining assistant. On the basis of his chemical analyses of the mine weather, he developed a forerunner of the breathing mask and an improved mine lamp for the miners. His thirst for knowledge was as universal as it was tireless; for research, records and correspondence he turned night into day and seldom slept longer than four hours. When Humboldt asked the Prussian king on 26 March 1795 to be released from his service as chief miner in order to realise his youthful dream of exploring the world, he had almost reinvented mining in the region.

He then turned to the then current research field of “animal electricity” in continuation of the experiments of Galvani and Volta. [10,11] Extensive studies with thousands of animal experiments[19] on the influence of electricity, partly carried out with his brother Wilhelm, partly as a self-experiment on his own body, proved, among other things, the consumption of oxygen in muscle movement and the effect of moisture on electrical conductivity.

“Every man has a duty to seek in his life the place from which he can best serve his generation,” says Humboldt in a letter to the French astronomer Delambre. As soon as Alexander von Humboldt became a wealthy heir through his mother’s death in November 1796, he left the civil service to become an independent naturalist and scientist. During the years of preparation, he used every opportunity to systematically deepen his knowledge, not only by studying the relevant travelogues and the latest research results, but also through his personal contact with the leading zoologists, botanists and astronomers of the time, as well as through the constant practical testing of measuring instruments in the various landscapes and natural spaces . consolidated and completed his equipment with measuring instruments. In the botanist Aimé Bonpland, he finally found the expert travel companion whose cooperation would enable him to carry out his complex research projects.

Illustration from ideas to a geography of the plants together with a nature painting of the tropical countries, Paris 1805

“It is the duty of the traveller who sees nearby what tortures and disparages human nature to bring to the knowledge of those who are able to help complaints of misfortune.”
– Alexander von Humboldt, Views of Nature – with scientific explanations, in: Collected Works, Volume 6, Cotta 1889, p. 67

The Spanish King Carlos IV provided Alexander von Humboldt with papers that guarantee him freedom of movement and the support of the vice-kings and officials in the American colonies. On 5 June 1799, the Pizarro weighs anchor in the port of La Coruña. On board Alexander von Humboldt, his companion Aimé Bonpland and equipment of state-of-the-art physical and astronomical measuring instruments. After a short stopover on Tenerife, the ship lands on 16 July 1799 at 9 o’clock in Cumaná in today’s Venezuela. The exploration of the Upper Orinoco and its connection to the Río Negro by Humboldt and Bonpland, which began there, is one of the most admired geographic ventures of the 18th century. In 1801 Humboldt continued his journey via Cuba to present-day Colombia and Peru. In June 1802, the expedition from Bogotá via Quito to Lima brought him to the foot of the Chimborazo, which at the time was considered the highest mountain in the world. Humboldt and his companions did not reach its summit, but set an altitude record (among Europeans) of 5,600 metres (according to newer calculations) for many years. In September 1802, a childhood dream comes true: Humboldt sees the Pacific for the first time on his journey to Lima.

Peru, Mexico, Cuba, the USA, and back to Europe

Alexander von Humboldt uses his stay in Peru for studies, helps by astronomical calculations in Callao to a more exact determination of the longitude of the capital Lima and sends samples of the bird excrements for analysis to Paris, which became known by him also in Europe as guano. On the return journey by ship to Guayaquil along the coast, he takes measurements of the cold oceanic current that passes off the Peruvian coast. The name Humboldt Current later became a well-known monument to his research. After more than one year’s scientifically fruitful stay in Mexico, the then Viceroyalty of New Spain, which led him from the Pacific Acapulco via Mexico City to the Atlantic Veracruz and from there once again to Cuba, he finally embarked for Philadelphia from Havana, where he had deposited the scientific yields and botanical collection collected before his Andean journey. In Washington he meets the American President Thomas Jefferson, whom he admired, whose scientific knowledge fascinates him, before he embarks on his journey home aboard the frigate La Favorite with Bonpland and 40 boxes full of scientific yield. At the beginning of August 1804, Humboldt returned to European soil in Bordeaux.

There and Back Again

“Nature must be felt, he who only sees and abstracts can divide a human age, in the life pressure of the glowing tropical world, plants and animals, he will believe to describe nature, but be eternally alien to it himself”.
– Alexander von Humboldt, Letter to Johann Wolfgang von Goethe, Paris January 3, 1810.

Humboldt’s description of his journey was written up and published in an enormous set of volumes over 21 years. This memorable expedition may be regarded as having laid the foundation of the sciences of physical geography and meteorology. By his delineation (in 1817) of “isothermal lines”, he at once suggested the idea and devised the means of comparing the climatic conditions of various countries. Humboldt‘s services to geology were based mainly on his attentive study of the volcanoes of the New World. He showed that they fell naturally into linear groups, presumably corresponding with vast subterranean fissures; and by his demonstration of the igneous origin of rocks previously held to be of aqueous formation, he contributed largely to the elimination of erroneous views, such as Neptunism.

The enormous popularity that distinguished Alexander von Humboldt beyond his death was due not least to the work to which he had devoted himself since 1834 and in the two and a half decades that remained for him: a comprehensive survey of scientific research into the world, published in five volumes in 1845-1862 under the title Kosmos. This enabled him to realize the vision he had in mind from the very beginning of his natural research and which guided his actions in all important decision-making situations. This covers the methodological cornerstones of Humboldt’s life as a researcher and of his late work Kosmos, which, with a total circulation of 87,000 copies at the time, was also a bestselling epoch. It was read by students, scientists, artists and politicians. Humboldt’s German publishers reported record orders for the Cosmos, surpassing even those for Goethe’s Faust. In England, three competing English translation editions of the first two Kosmos volumes were published within four years; around 40,000 English copies were sold in 1849, plus many thousands in the USA. Much of Alexander von Humboldt‘s private life remains a mystery because he destroyed all of his private letters. He never married and he was strongly attached to his brother’s family throughout his lifetime.

Egon Friedell in his Cultural History of the Modern Epoch writes about Alexander von Humboldt and his Kosmos:

“In the winter of 1827 to 1828 Alexander von Humboldt gave his lectures on physical description of the world, from which his “Kosmos” emerged, in Berlin under great sensation, an astonishing work which had never before been created and will not be repeated so soon. It is no more and no less than a painting of the world, a universal history of nature, all that is visible and explorable from the moss store to the star cluster, from the stone to the human brain comprehensive and seeing in the most beautiful context, the fruit of life of a globetrotter who was at the same time a philosopher, belonging in the exquisite popularity and pure sculpture of representation as much to the history of literature as to the history of science. The work was translated into eleven languages, and for a lifetime Humboldt was regarded as Germany’s greatest glory.”