You are here: Home › archeology › Auguste Mariette and the Discovery of the Serapeum 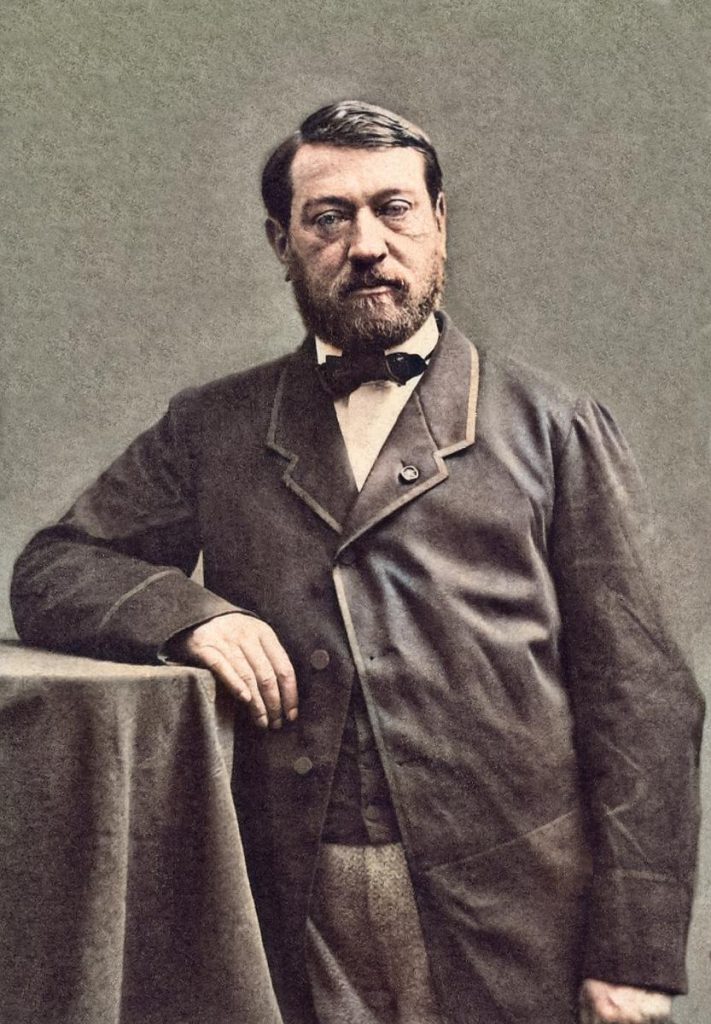 On January 19, 1881, French scholar, archaeologist and Egyptologist François Auguste Ferdinand Mariette passed away. Mariette conducted major excavations throughout Egypt, revealing much about the earlier periods of Egyptian history. Sent by the Louvre, in 1850, to purchase papyruses, at Saqqara he discovered the Serapeum, the burial place of the Apis bulls, living manifestations of the god Ptah.

“The Egyptian duck is a dangerous animal: one snap of its beak and you are infected with Egyptology for life.”
― Auguste Mariette, [14]

Born on 11 February 1821 at Boulogne-sur-Mer, France, where his father was a town clerk, Mariette proved to be a talented draftsman and designer. He went to England in 1839 at age eighteen as professor of French and drawing at a boys’ school at Stratford-upon-Avon. In 1840 he became pattern-designer to a ribbon manufacturer in Coventry, but he returned the same year to Boulogne. In 1841, then a modest teacher at the college of Boulogne-sur-Mer and a journalist in his spare time, he became interested in ancient civilization by discovering the few Egyptian objects that the Boulogne Museum had at the time. A few years later, he declared: “I entered Egypt through the mummy of the Boulogne Museum“. Meanwhile his cousin Nestor L’Hote, the friend and fellow-traveller of Jean Francois Champollion [2], died, and the task of sorting his papers filled Mariette with a burning passion for Egyptology. Largely self-taught, he devoted himself further to the study of hieroglyphics and Coptic. His 1847 analytic catalogue of the Egyptian Gallery of the Boulogne Museum provided him a minor appointment at the Louvre Museum in 1849.

In 1850, Mariette was entrusted with a government mission of seeking and purchasing the best Coptic, Syriac, Arabic and Ethiopic manuscripts in Egypt for the Louvre collection. After little success in acquiring manuscripts due to inexperience, to avoid an embarrassing return empty-handed to France, he visited temples and befriended a Bedouin tribe, who led him to Saqqara, an area that included part of the burial grounds of ancient Memphis. The site looked not very promising, but on noticing one sphinx from the reputed avenue of sphinxes, that led to the ruins of the Serapeum at Saqqara near the step-pyramid, with its head above the sands, he started to work. The Serapeum was the burial place of the Apis bulls, living manifestations of the Egyptian god Ptah. It was believed that the bulls became immortal after death as Osiris Apis (just as dead humans were assimilated to Osiris, the king of the underworld), later shortened to Hellenistic Serapis. Apis was the most popular of the three great bull cults of ancient Egypt. The worship of the Apis bull was continued by the Greeks and after them by the Romans, and lasted until almost 400 A.D.

The Avenue of Sphinxes

Thus, in 1851, Mariette made his celebrated discovery of avenue of sphinxes and eventually the subterranean tomb-temple complex of catacombs with their spectacular sarcophagi of the Apis bulls. At November 12, he was able to enter the complex, finding thousands of statues, bronze tablets and other treasures, but only one intact sarcophagus. He also found the virtually intact tomb of Prince Khaemweset, Ramesses II‘s son.[7]

Accused of theft and destruction by rival diggers and by the Egyptian authorities, Auguste Mariette began to rebury his finds in the desert to keep them from these competitors. Instead of manuscripts, official French funds were now advanced for the prosecution of his researches, and he remained in Egypt for four years, excavating, discovering — and despatching archaeological treasures to the Louvre. Upon his return to France, Mariette was promoted to the post of curator at the Louvre. But, Mariette became dissatisfied with a purely academic role after his discoveries at Saqqara.[3] 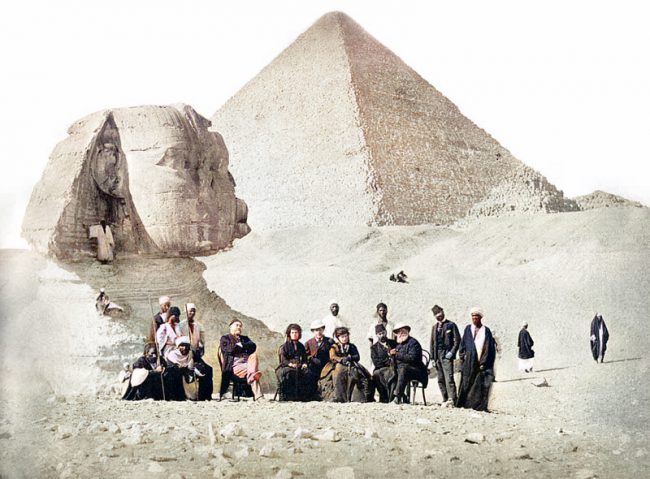 The Sphinx with Auguste Mariette (seated, far left) during the visit of Pedro II of Brazil to the Giza Necropolis at the end of 1871.

Accepting the position of conservator of monuments from the Egyptian government, Mariette in 1858 settled in Egypt, where he remained for the rest of his life. He eliminated unauthorized excavation, thereby securing a virtual monopoly on archaeological investigation, and he restricted the sale and export of antiquities in order to preserve new discoveries for the Egyptian nation. In 1859 Mariette succeeded in persuading the Ottoman viceroy of Egypt to establish a museum at Būlāq, near Cairo, to house what became the world’s foremost repository of Egyptian antiquities, the Egyptian Museum.[2] In 1860, he set up 35 new dig sites, whilst attempting to conserve already-dug sites. This was aided by the fact that no rivals were permitted to dig in Egypt, a fact that raised much protest among the British and Germans.[3] Among many other discoveries and findings, Mariette also cleared the sands around the famous Sphinx down to the bare rock, and in the process discovered the famous granite and alabaster monument, the “Temple of the Sphinx“.

In 1869, at the request of the Khedive, Mariette wrote a brief plot for an opera, which was later revised into the scenario by Camille du Locle. The plot was later developed by Giuseppe Verdi [5], who adopted it as a subject for his opera Aida. For this production, Auguste Mariette and du Locle oversaw the scenery and costumes, which were intended to be inspired by the art of ancient Egypt. Aida was to be premièred to mark the opening of the Suez Canal, but was delayed until 1871.[3,9] Mariette was raised successively to the rank of bey and pasha, and European honors and orders were bestowed on him. Mariette died in Cairo 0n January 18, 1881, at age 59, and was interred in a sarcophagus in the courtyard of the Cairo Museum.  Overall, Auguste Mariette had excavated 300 tombs in Saqqarah and Giza, cleared many sites in Egypt and Nubia, and found about 15,000 objects. His last work was published after his death under the control of Gaston Maspero, Mastabas of the Old Empire.