You are here: Home › physics › Hans Geiger and the Invention of the Geiger-Müller Counter

On September 30, 1882, German physicist Johannes Wilhelm Geiger was born. He is best known as the co-inventor of the Geiger counter and for the Geiger–Marsden experiment which discovered the atomic nucleus.

Geiger was born at Neustadt an der Haardt, Germany. He was one of five children born to the Indologist Wilhelm Ludwig Geiger, who was a professor at the University of Erlangen. In 1902, Hans Geiger started his physical and mathematical studies at the University of Erlangen, where he was a member of the Burschenschaft der Bubenreuther and did his one-year military service in the first two semesters. In 1904 he also spent one semester at the Ludwig Maximilian University in Munich. In 1906 he passed his second state examination and received his doctorate in Erlangen from Eilhard Wiedemann with the thesis “Radiation, Temperature and Potential Measurements in Discharge Tubes with Strong Currents“.

After his studies he moved to Manchester as an assistant to Arthur Schuster and remained so from 1907 under his successor Ernest Rutherford,[7] whose 1911 atomic model was partly based on Geiger’s discoveries. In addition to Rutherford, he also worked with Ernest Marsden. At the end of his time in Manchester in 1912, Geiger was regarded as an international authority for measurements of radioactivity, which was also reflected in a book with Wilhelm Makower.

In 1912 Geiger returned to Germany to the Physikalisch-Technische Reichsanstalt in Berlin-Charlottenburg, where he set up a laboratory for radioactivity and collaborated with James Chadwick,[6] who had followed him from Manchester and whom he also supported during his internment during the First World War, and with Walther Bothe. During the First World War he served as an artillery officer and worked in Fritz Haber‘s Gastruppe (the Pioneer Regiment 35) for the Gas War. After habilitating in Berlin in 1924, Geiger moved to Kiel in 1925 as a professor at the Christian-Albrechts-Universität.

From 1924 to 1925 Geiger and Walther Bothe introduced the method of coincidence measurement, which they used to study the Compton effect. Bothe was later awarded the Nobel Prize for this experiment after Geiger’s death. Among other things, their experiment also showed the validity of the conservation laws of energy and momentum at the atomic level, which was doubted at the time (by Niels Bohr,[5] among others). The period in Kiel was also quite important for Geiger. Along with his assistant Walther Müller, he was able to develop the particle detector measuring ionizing radiation, which became famous as the Geiger-Müller-counter. It was released in 1929 and increased Geiger’s reputation dramatically. 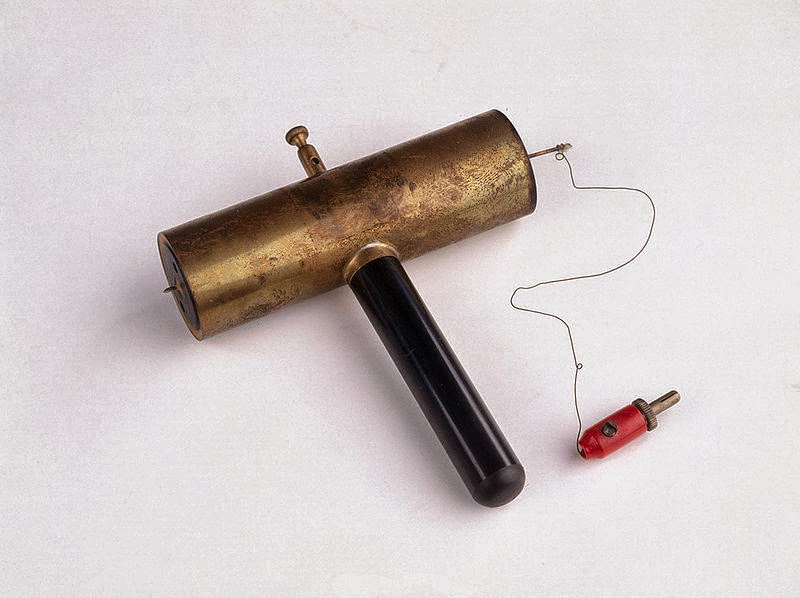 Hans Geiger’s masterpiece is known to be the Geiger-Müller counter, which is also known simply as the Geiger counter. It belongs to the best known instruments of its kind since it was operated as a hand-held device. Even though his invention does have its limits, especially when it comes to very high radiation rates, it became popular for the use in various scientific fields, such as geology, health physics, experimental physics, and the nuclear industry. The counter itself is basically made of two major elements. The most important Geiger-Müller tube as well as the display component. The tube is able to sense radiation due to its filling of helium, neon, argon and a little pressure, which conducts a small electrical charge when particles or photons of radiation make the gas conductive by ionization. Through the Townsend avalanche effect, the ionization is amplified and the radiation can be measured easily.

In 1939 Geiger took part in the founding meetings of the Uranverein (Uranium Association) and his advice to intensify research on nuclear energy had a decisive influence on its September meeting. At the 1942 meeting of the Reich Research Council on further support for nuclear energy research, he spoke out against further continuation of the work. He moved back to Berlin and became director of the Institute of Physics as the successor of Gustav Hertz. Although Geiger signed a petition against the Nazi government’s interference with universities, he provided no support to colleague Hans Bethe (winner of the 1967 Nobel Prize in Physics) when he was fired for being Jewish. In 1945, Geiger’s house in Potsdam, Germany was confiscated and he passed away only later in the same year. Already since 1942 he had retired from his scientific offices due to a severe rheumatic disease.

What is a GM Counter? – Geiger Muller Counter, [8]