You are here: Home › physics › James Chadwick and the Discovery of the Neutron 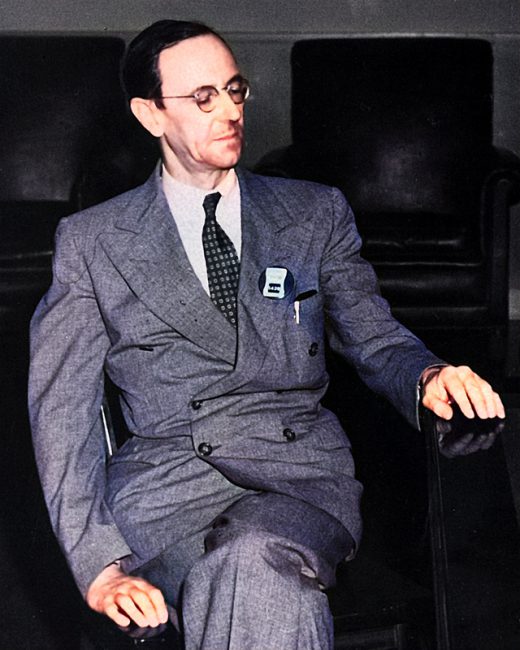 On February 27, 1932, English physicist and Nobel Laureate Sir James Chadwick published an article in the scientific journal ‘Nature‘ about the discovery of the neutron, a previously unknown particle in the atomic nucleus.

Chadwick was born in Bollington, near Manchester. His parents were John Joseph Chadwick and Mary Anne Knowles. He first attended the Bollington Cross C of E Primary School and later the Central Grammar School for Boys in Manchester. In 1908 he began studying physics at the University of Manchester, where he graduated in 1911. Chadwick then spent two years with Ernest Rutherford at the Physical Laboratory in Manchester,[5] where he worked on various problems of radioactivity. In 1913 he graduated as Master of Science (M.Sc.) in this field. In the same year he won a scholarship (“1851 Senior Research Scholarship”) and went to the Physikalisch-Technische Reichsanstalt in Berlin-Charlottenburg as an assistant to Hans Geiger.[11]

After the outbreak of the First World War in 1914, he was imprisoned. During his imprisonment in the “Zivilgefangenenlager” in Ruhleben, however, he was still able to carry out his own experiments, albeit with clear restrictions. After his return to England and Rutherford’s assumption of the management of the Cavendish Laboratory in 1919, he became its close collaborator and assistant director of the institute. They worked together on the investigation of gamma radiation and the structure of the atomic nucleus.

In Search of the Neutron

Returned to Cambridge, James Chadwick discovered an until then missing piece in the atomic nucleus in 1932, which was later known as the neutron. The search for the particle began around 1920, when Ernest Rutherford published his ideas on its possible existence. In his understanding, the neutron was to be a neutral double consisting of an electron that orbited a proton. About a decade later, Viktor and Dmitri Ivaneko however proved that the nucleus could never consist of protons and electrons and in the following year, German scientists found out that in case of alpha particles being emitted from polonium and falling on beryllium, boron or lithium, radiation was produced, which they took for gamma rays. Iréne Joliot-Curie (daughter of Marie Curie) and Frédéric Joliot proved that the previously discovered radiation ejected protons of high energy, when falling on a hydrogen containing compound.

The next person known to have been experimenting on the gamma ray theory was James Chadwick himself. He performed many experiments, stating that the radiation his German colleagues talked about contained uncharged particles of about the mass of a proton. The particles were called neutrons and his theory spread quickly, earning a great reputation amongst other scientists all over the world.  Chadwick published an article in the journal Nature on 27 February 1932 on his research into the existence of the neutron. For his achievement he was awarded the 1935 Nobel Prize for Physics. Chadwick subsequently devoted himself to building a cyclotron at the University of Liverpool, where he became Lyon Jones Professor of Physics in 1935. In 1940, the device was used to prove that a few kilograms of enriched uranium would be sufficient for the production of an atomic bomb, not the previously estimated quantity of at least one tonne.

Chadwick’s discovery was critical in the sense of general physics and especially in concerns of nuclear fission. Chadwick was a member of the MAUD Commission, which discussed whether the construction of a nuclear weapon was possible. He wrote about it later:

„I realised that a nuclear bomb was not only possible, it was inevitable…I had then to start taking sleeping pills. It was the only remedy.“

The Italian scientist Enrico Fermi was through Chadwick’s achievements motivated to investigate various nuclear reactions which led to Otto Hahn and Fritz Strassman discovering the first nuclear fission…but this is already another story.[6] Together with other British scientists, Chadwick worked in this MAUD commission on the construction of such a weapon, which reckoned with the availability of a British nuclear weapon until 1943. An appropriate facility for the production of weapons-grade material was built in Canada. After the USA entered the war in December 1941, the American government also intensified its efforts to build a nuclear weapon. In 1943, the governments of the two states decided to coordinate their nuclear programmes. Together with other British scientists, Chadwick was sent to the USA to work on the Manhattan project. He led the British mission to the Manhattan Project and remained there until 1946. The uranium produced in Canada was used for further research and thus contributed to the completion of the first atomic bomb.

James Chadwick passed away on July 24, 1974 in Cambridge.