You are here: Home › physics › Wilhelm Conrad Röntgen – The Father of Diagnostic Radiology 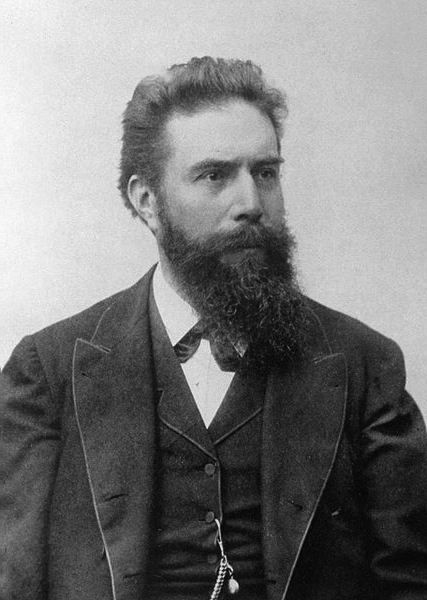 On March 27, 1845, Wilhelm Conrad Röntgen was born. The German physicist is best known for producing and detecting electromagnetic radiation in a wavelength range, better known as X-rays or Röntgen rays. Röntgen received the Nobel Prize in Physics for his achievement in 1901.

“Having discovered the existence of a new kind of rays, I of course began to investigate what they would do. … It soon appeared from tests that the rays had penetrative power to a degree hitherto unknown. “
— Conrad Röntgen, The New Marvel in Photography (1896)

Wilhelm Conrad Röntgen was born in Lennep, which today belongs to Remscheid, Germany. He was the only child of the upper middle-class cloth manufacturer or cloth merchant Friedrich Röntgen and his wife Charlotte Constanze, née Frowein. For economic reasons the family moved to Apeldoorn in the Netherlands in 1848. From 1861 to 1863 Röntgen attended the Technical School in Utrecht. There he usually had good grades, but his diligence was considered too moderate in his reports.[3] For disciplinary reasons, because he was mistaken for the author of a caricature of his class teacher, he was expelled from school without graduation. Although he subsequently acquired language skills, he did not pass the entrance examination “examen admissionis” for university, which was possible in the Netherlands, but as a guest student he attended courses in biology (botany, zoology), mathematics, physics and languages (Latin, Greek) at a Dutch university.

On 23 November 1865 Röntgen began to study at the Swiss Federal Institute of Technology Zurich (ETH Zurich) as a regular student. This was possible because an entrance examination at the polytechnic there was decisive and not proof of a degree. There he received his diploma as a mechanical engineer on 6 August 1868. In the following period he completed a postgraduate course in physics with August Kundt, who was six years his senior. In June 1869 he received his doctorate in physics from the University of Zurich, the title of his work being Studies on Gases. In 1870 he then accompanied August Kundt as an assistant to the “Physikalische Kabinett” in Würzburg in the building of the old university in the Domerschulstraße. In Würzburg he published his first publication as a scientist in the Annalen der Physik und Chemie. Röntgen also made several contributions to physics through the study of electrical characteristics of quartz, the modification of the planes of polarised light by electromagnetic influences or through his experiments on the functions of the temperature and compressibility on various fluids.

On April 1, 1872 he moved together with Kundt to the Imperial University in Strasbourg. Röntgen habilitated in Strasbourg in 1874 and initially settled there as a private lecturer. Previously, he had been denied his habilitation by the University of Würzburg because of his lack of an Abitur. From 1875 he worked as an extraordinary professor of physics and mathematics at the Agricultural Academy Hohenheim near Stuttgart. At the request of his former academic teacher and patron Kundt, Röntgen then (1876) was appointed extraordinary professor of physics in Strasbourg. In 1879 Röntgen was appointed to a full professorship in Giessen and received a fixed salary for the first time in his scientific career. Finally, Prince Regent Luitpold of Bavaria appointed Röntgen to succeed Friedrich Kohlrausch on the chair of physics in Würzburg on 31 August 1888.

However, Röntgen is best known for his discovery of the X-rays while occupied at the University of Würzburg in 1895. He investigated external effects from various types of vacuum tube equipment when electrical discharge was passed through. While performing his experiments with Lenard’s tubes added by a thin aluminum window and a cardboard covering, The scientist found out that invisible cathode rays caused a fluorescent effect on a barium platinocyanide painted cardboard when located closely to the aluminum window. Röntgen extended his experiments with the Hittorf-Crookes tube and came to the conclusion to have discovered a new kind of rays for the first time, which he temporally named X-rays. A few days later, Röntgen tried out his new discovery on his wife Anna Bertha. He took the first X-ray image of her hand. Seeing her own skeleton was quite shocking to her wherefore she said “I have seen my death!“.

The scientist published his first of three papers on X-rays in December 1896 titled ‘On a new kind of rays‘. Röntgen was awarded an honorary Doctor of medicine for his achievement by the university and earned himself the reputation as the father of diagnostic radiology. In 1901, Röntgen was awarded with the Nobel Prize in Physics and donated the monetary reward from his prize to the university. In response to an inquiry, he told AEG that he was of the opinion that “his inventions and discoveries belong to the general public and should not be reserved for individual companies by patents, licence agreements or the like“. Likewise, he rejected the title of nobility proposed to him.

In 1919 Röntgen’s wife died after a long and serious illness. In the same year he was appointed honorary member of the German Physical Society. He retired from his position as professor at the University of Munich on April 1, 1920. Due to inflation in the post-war years, Röntgen lost large parts of his considerable fortune. As a retired civil servant, however, he received regular pension payments and therefore did not have to suffer any hardship.

Never before had the news of a scientific discovery spread so quickly as in the case of X-rays. On 5 January 1896, the first public news about this appeared in the morning edition of “Die Presse” in Vienna. Now the usefulness of the “X-rays” in medicine was immediately understandable even for laypersons. Röntgen’s discovery, however, not only revolutionized medical diagnostics, but also made other groundbreaking scientific achievements of the 20th century possible. Medical diagnostics is still the most important field of application for X-rays today. In the course of time the radiation exposure could be further reduced, at the same time the images became more and more detailed. Today, new imaging techniques such as computed tomography can be used to create three-dimensional images of the inside of the body using mathematical methods.