You are here: Home › literature › Miguel de Cervantes and his Knight of the Sad Countenance 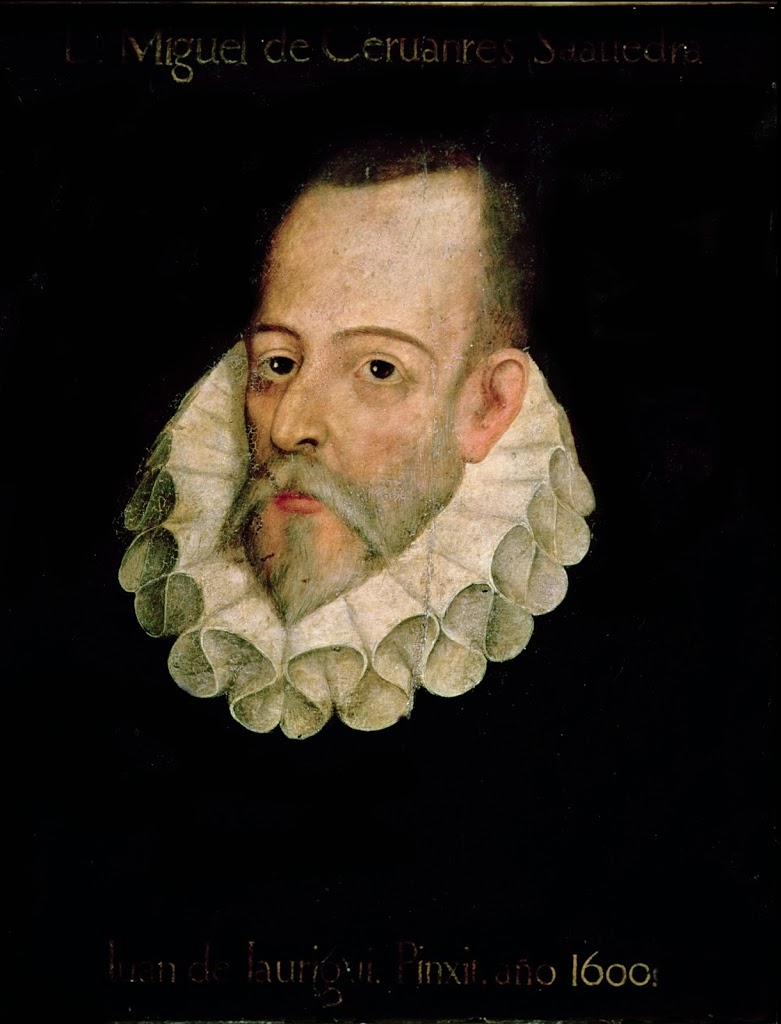 (Probably) on September 29, 1547, famous Spanish novelist, poet, and playwright Miguel de Cervantes Saavedra  was born. His magnum opus, Don Quixote, is considered to be the first modern European novel, a classic of Western literature, and is regarded amongst the best works of fiction ever written. Moreover it has been translated into nearly every major language, making it one of the most widely distributed books after the Bible. Miguel de Cervantes’ influence on the Spanish language has been so great that the language is often called la lengua de Cervantes. Besides, no name is more associated with Spanish literature than that of Miguel de Cervantes Saavedra.

Miguel de Cervantes was born in 1547 as the son of surgeon Rodrigo de Cervantes in Alcalá de Henares, a small town near Madrid. His mother Leonor de Cortinas is believed to be the descendant of Jews who had converted to Christianity. The exact date of his birth is not known, though it was determined from records in the church register and given the tradition to name a child with the name of the feast day of his birth, and September 29 is the feast day of Saint Michael the Archangel. Little is known of Cervantes’ early years. As a young boy he moved from town to town as his father sought work. While some of his biographers argue that he studied at the University of Salamanca, there is no solid evidence for that. There has also been speculation also that Cervantes studied with the Jesuits in Córdoba or Seville.

The Cripple of Lepanto

The first published works by de Cervantes appeared in 1569. He contributed some poetry to a memorial collection after the death of Elizabeth of Valois, the wife of Spanish king Philip II. In 1570 he went to Rome to study. Whether this was the real reason or he was fleeing from a royal warrant of arrest, for having wounded a certain Antonio de Sigura in a duel remains a mystery. Ever loyal to Spain, Cervantes joined a regiment of the Spanish Navy Marines in Naples and received a wound in the battle of Lepanto that permanently injured his left hand. As a result, he picked up the nickname of el manco de Lepanto (the cripple of Lepanto). In his book Journey to Parnassus he was to say that he “had lost the movement of the left hand for the glory of the right” (he was thinking of the success of the first part of Don Quixote). Cervantes always looked back on his conduct in the battle with pride: he believed that he had taken part in an event that would shape the course of European history.

The injury Cervantes received in the battle was only the first of his troubles, when in 1575 he and his brother Rodrigo were on a ship that was captured by Turkish pirates and sold into slavery. It wasn’t until five years later that Cervantes was released. Nevertheless, he ventured four unsuccessful escape attempts. But, in the end his family and friends succeeded to raise 500 escudos, an enormous sum of money that would drain the family financially, as ransom. This was also a rather striking experience for Cervantes as his first play, Los tratos de Argel (“The Treatments of Algiers“), was based on his adventures in captivity, as was the later Los baños de Argel (“The Baths of Algiers“).

“In some village in La Mancha, whose name I do not care to recall, there dwelt not so long ago a gentleman of the type wont to keep an unused lance, an old shield, a skinny old horse, and a greyhound for racing.” (Miguel de Cervantes, from the first chapter of Don Quixote)

Imprisonment and Writing a Master Piece

In 1584 Cervantes married the much younger Catalina de Salazar y Palacios. But only a few years later, Cervantes left his wife, faced severe financial difficulties, and was jailed at least three times. Cervantes had began working for Spanish Armada as a commissary. But, it was a rather thankless task, collecting grain supplies from rural communities. Many did not want to provide the goods, and de Cervantes ended up in prison on two occasions because of charges of mismanagement. In this time, he began writing some of literature’s greatest masterpieces. He eventually settled in Madrid in 1606, shortly after the first part of “Don Quijote” was published in 1605. We all know the story of the Don Quixote, El caballero de la triste figura, the Knight of the Sad Countenance. In his novel, Cervantes tells the story of Alonso Quijano, an hidalgo who reads so many chivalric novels that he decides to set out to revive chivalry, under the name Don Quixote. He recruits a simple farmer, Sancho Panza, as his squire, who often employs a unique, earthly wit in dealing with Don Quixote’s rhetorical orations on antiquated knighthood. 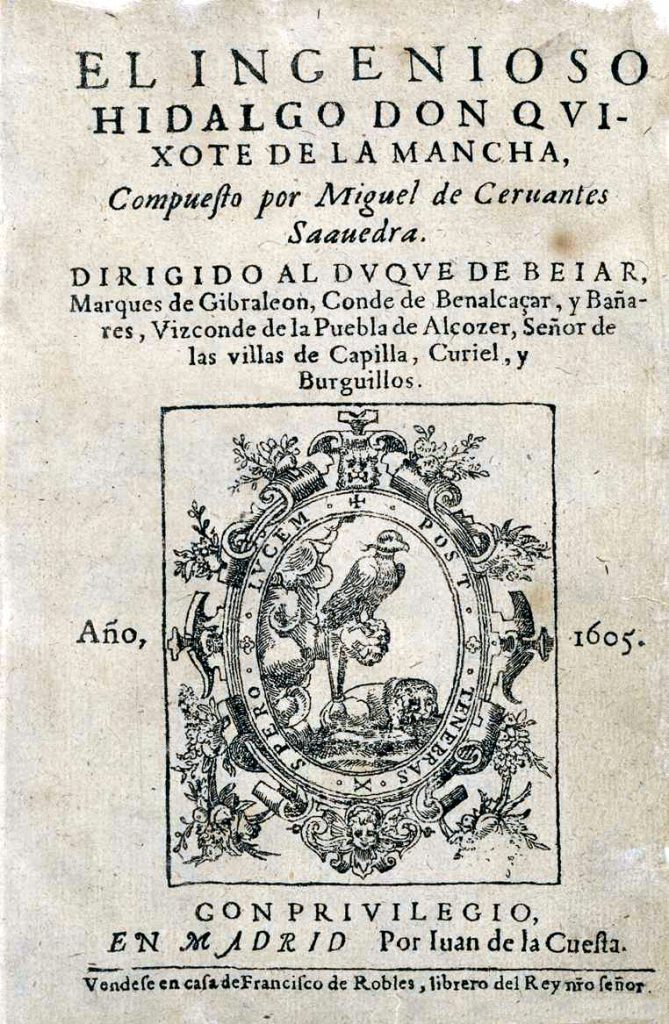 Although publication of the novel didn’t make Cervantes rich, it eased his financial burden and gave him recognition and the ability to devote more time to writing. He published the second part of Don Quijote in 1615 and wrote dozens of other plays, short stories, novels and poems. Nevertheless, the quality of his further poetry is heavily disputed among critics.  In the spring of 1616 his health deteriorated noticeably. On April 2, when he could no longer leave his house, he took the final vow of the Franciscan Community. He died impoverished in Madrid on April 22, 1616. The following day he was buried in the convent of the barefoot Trinitarians, which is why this date was long regarded as the day of his death, which is coincidentally also the death date of William Shakespeare.[5] But, we have to keep in mind that Spain and England by the time were using two different variants of calendars (Julian and Gregorian) and therefore, Cervantes’ death came 10 days sooner…But this is already another story.[6]

“Death eats up all things, both the young lamb and old sheep; and I have heard our parson say, death values a prince no more than a clown; all’s fish that comes to his net; he throws at all, and sweeps stakes; he’s no mower that takes a nap at noon-day, but drives on, fair weather or foul, and cuts down the green grass as well as the ripe corn: he’s neither squeamish nor queesy-stomach’d, for he swallows without chewing, and crams down all things into his ungracious maw; and you can see no belly he has, he has a confounded dropsy, and thirsts after men’s lives, which he gurgles down like mother’s milk.” (Miguel de Cervantes, from Don Quixote)