You are here: Home › chemistry › Georg Ernst Stahl and the Phlogiston Theory 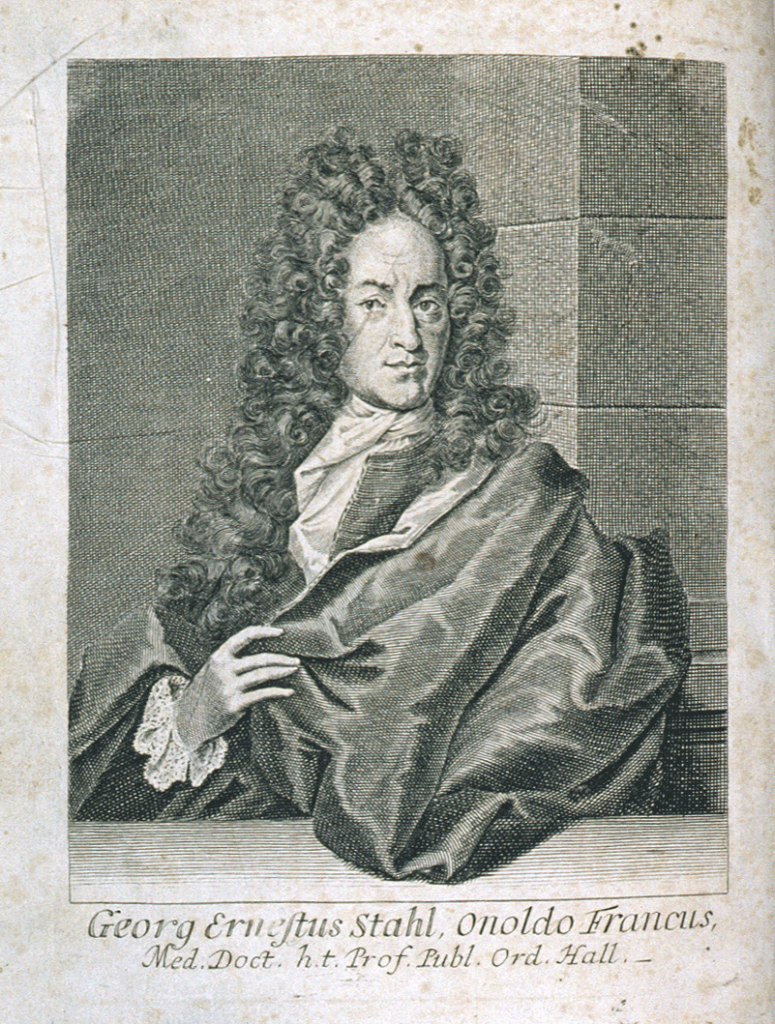 On October 22, 1659, German chemist, physician and philosopher Georg Ernst Stahl was born. Stahl developed the phlogiston theory of combustion and of such related biological processes as respiration, fermentation, and decay. Combustible objects, he said, were rich in phlogiston, and during combustion is lost. The remaining ash, now having no phlogiston, could no longer burn. Until the late 18th century his works on phlogiston were accepted as an explanation for chemical processes.

“Chymy, which is also otherwise called alchymia and spagyrica, is an art of putting mixed or compound or aggregated (aggregata) bodies, into their principia, or reassembling them from such principiis into such bodies.”
– Georg Ernst Stahl

Georg Ernst Stahl was born in St. John’s Parish in Ansbach, Brandenburg in 1659 and was raised in Pietism. His parents were Johann Lorenz Stahl (1620-1698), court council secretary in Ansbach, then from 1664 consistorial secretary and 1672 marriage court secretary (according to other sources Protestant pastor) in Ansbach and his mother Marie Sophie Meelführer (1635-1680). After attending grammar school in Ansbach, which was then associated with the Mark Brandenburg (as the Principality of Ansbach), Stahl studied medicine and chemistry in Jena from 1679, together with Friedrich Hoffmann Jr. (1660-1742), who later helped him to obtain a call to his professorship in Halle (Saale) His interests in chemistry were due to the influence a professor of medicine, Jacob Barner, and a chemist, Johann Kunckel von Löwenstjern.

In 1684, Stahl received his doctorate in Jena, title of the dissertation: De intestinis: eorumque morbis ac symptomatis, cognoscendis & curandis (1684). Shortly thereafter, he habilitated at the University Halae Magdeburgicae with the title Propempticon inaugurale, de fistula lacrymali (1702) and began teaching. Through teaching at the university, Stahl gained a good reputation and was hired as the personal physician to Duke Johann Ernst of Sachsen-Weimar. He joined the faculty of the University of Halle in 1694 and became the physician and counselor to King Friedrich Wilhelm I of Prussia and in charge of Berlin’s Medical Board.

In Halle (Saale) he married Catharina Margarethe Miculci (1668-1696) from Zerbst in 1694. She died in childbed, the freshly born little daughter three months later. His second wife Barbara Eleonore Tentzel (1686-1706) from Halle (Saale), who married him in 1705, met the same fate – barely 20 years old. Both strokes of fate had a lasting influence on the character of this sensitive person. Opponents therefore called him a misanthrope, since he is said to have been rigid and closed in social intercourse. Due to his dogmatism, he did not gather a serious circle of students around him.

The Nascent Science of Chemistry

The probably best known works by Georg Stahl were accomplished during the time he worked at Halle University. He believed that chemistry could not be reduced to mechanistic views entirely. Stahl did probably not believe that atomic theories were enough to describe the chemical processes that go on. He believed that atoms could not be isolated individually and that they join together to form elements. He took an empirical approach when establishing his descriptions of chemistry.

Stahl used the works of Johann Joachim Becher [1] to help him come up with explanations of chemical phenomena. The main theory that Stahl got from J. J. Becher was the theory of phlogiston. This theory did not have any experimental basis before Stahl. He was able to make the theory applicable to chemistry. This theory was later replaced by Antoine-Laurent Lavoisier’s theory of oxidation.[2] He also propounded a view of fermentation which in some respects resembles that supported by Justus von Liebig a century and half later. Although his theory was replaced, Stahl’s theory of phlogiston is seen to be the transition between alchemy and chemistry.

A significant contribution was the phlogiston theory, which was the first comprehensive theory in the nascent science of chemistry. Although it incorrectly interpreted the process of combustion and led to the misinterpretation of many discoveries, including those of oxygen and nitrogen, it was the first to summarize a chemical transformation or redox process using the terminology of its time. Measured against the state of knowledge at that time and the available empirical data, his assumption was plausible. The concept of an element was still emerging; substances were not yet clearly delineated and distinguished. Nor was it at all clear that combustion was the result of a chemical reaction between two bodies in which energy was released. From today’s point of view, phlogiston could therefore be most easily compared to such energy being released. It was finally refuted by Antoine Lavoisier.

Stahl as a Physician

As a physician, Stahl advocated the doctrine of psychic influence (animism) and thus sharply opposed the materialism of Herman Boerhaave and Friedrich Hoffmann.[4] He recognized the usefulness of fever as a logical defensive reaction of the body to infections. He believed that by inducing artificial contradictions, conflicts could be cathartically resolved. From today’s perspective, the choice of his means sometimes seems grotesque. Nevertheless, Stahl advocated theories that were surprisingly modern for his time.

In 1715, he was appointed personal physician to Frederick William I, King of Prussia, and offered the position of president of the Collegium-Medicum in Berlin. This led to the establishment of a training school for medicine. On September 27, 1725, Frederick William I issued the General and Newly Sharpened Medicinal Edict. The draft for this edict had been prepared by G. E. Stahl in collaboration with the Brandenburg personal physician Johann Theodor Eller. For the first time, it regulated the training of pharmacists by law. He continued to work and publish following the death of both of his wives and eventually his children, but was often very cold to students and fell into deep depression until his death in 1734 at the age of 74.