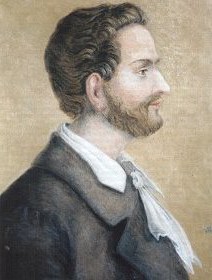 On October 23, 1813, Prussian explorer and naturalist Friedrich Wilhelm Ludwig Leichhardt was born. He is most famous for his exploration of northern and central Australia. Leichhardt went to Australia in 1842 to study the rocks and wildlife in Queensland and the Northern Territory. In 1848 he left on an expedition with nine men to find a route from Moreton Bay (Brisbane) to Perth, rather poorly equipped. The party disappeared, leaving a mystery as to its fate which nine major expeditions in the next 90 years failed to solve.

Ludwig Leichhardt was born in Sabrodt (later a district of Trebatsch, today of Tauche), Mark Brandenburg, Prussia, the sixth of nine children. His father Christian Hieronymus Matthias Leichhardt (1778-1840) was a peat inspector.  His mother was Charlotte Leichhardt, née Strählow (1776-1854). By the standards of the time, his family lived relatively well. Ludwig himself was physically weak in his early years and enjoyed strenuous physical exercise. At school he was one of the best students. His godfather, Pastor Rödelius from Zaue, sponsored him and took him at his own expense to the Gymnasium in Cottbus, where he earned his Abitur in 1831. After graduating from high school, he returned home and was to pursue the career of a civil servant. However, he decided to study philosophy in Berlin. In 1833, he transferred to the University of Göttingen, where he studied practical philosophy, history of religion, and linguistics, and later natural history, botany, metaphysics, and physics.

There he met William Nicholson and his brother John, who took him to England in 1837. They studied in London and in Paris at the Muséum d’histoire naturelle. Leichhardt did not complete his studies. In May 1838, he applied to the Prussian consul in London for a passport, but was refused because he had been called up for military service in the meantime. His immediate return home was ordered. He resisted and, with the help of the Nicholson family, obtained a British passport. As a result, he was considered a deserter in Prussia. In 1840, William Nicholson and Leichhardt traveled for several months in France, Italy, and Switzerland. On October 1, 1841, he sailed from Cardiff on the sailing ship Sir Edward Paget to Australia to explore the as yet unknown territories. The passage was paid for by Nicholson, who also provided him with money to establish an initial livelihood in Australia. In February 1842 Leichhardt arrived in Sydney.

At the invitation of sheep farmer Walter Scott, Leichhardt traveled by steamboat to Newcastle on the Hunter River in September 1843. Leichhardt returned to Sydney in 1844 and hoped to take part in an expedition sponsored by the government from Moreton Bay to Port Essington. Unfortunately, the plans for this mission fell through, Leichhardt decided to undertake the expedition anyway, accompanied by volunteers and supported by private fundings. In August 1844 the crew sailed to Moreton Bay where further expedition members joined and together they officially departed on the first of October 1844 from Jimbour, the farthest outpost of settlement on the Queensland Darling Downs. The party arrived in Port Essington on 17 December 1845 after completing about 4800 kilometers overland. Leichhardt returned to Sydney by boat, arriving on 25 March 1846 to a hero’s welcome. The Journal of an Overland Expedition in Australia, from Moreton Bay to Port Essington, a Distance of Upwards of 3000 km, During the Years 1844 and 1845 by Leichhardt describes this expedition.

The next expedition Leichhardt started was supported financially by the government and by private investors. The expedition began in December 1846 and was supposed to take him from the Darling Downs to the west coast of Australia and ultimately to the Swan River and Perth. The crew had to return in June 1847 after covering only 800km due to bad weathers, malaria fever and famine. After recovering from malaria Leichhardt spent six weeks in 1847 examining the course of the Condamine River, southern Queensland, and the country between the route of another expedition led by Sir Thomas Mitchell in 1846 and his own route, covering nearly 1,000 km. For his achievements Ludwig Leichhardt was awarded the annual prize of the Paris Geographical Society along with French explorer Rochet d’Héricourt. Further, the explorer the Royal Geographical Society of London awarded Leichhardt its Patron’s Medal as recognition of ‘the increased knowledge of the great continent of Australia‘.

Already one year later, Ludwig Leichhardt set out for another expedition from the Condamine River to reach the Swan River and part of the journey were four Europeans, two Aboriginal guides, seven horses, 20 mules and 50 bullocks. Ludwig Leichhardt was last seen on April 3, 1848 at McPherson’s Station, Coogoon, on the Darling Downs. His sudden disappearance remains a mystery until this day. even though the latest evidence suggests that they may have perished somewhere in the Great Sandy Desert of the Australian interior. The expedition was expected to last about two to three years, but four years after his disappearance the government of South Wales sent out a search expedition but without any significant results. In 1869 the Government of Western Australia heard rumours of a place where the remains of horses and men killed by indigenous Australians could be seen. A search expedition was sent out under John Forrest, but nothing was found, and it was decided that the story might refer to the bones of horses left for dead at Poison Rock during Robert Austin’s expedition of 1854.

For over 100 years, Australian authorities pursued all promising leads to Leichhardt’s whereabouts and funded expeditions. In 1938, the ethnologist Charles Mountford was commissioned by the government of South Australia to search with a team for traces of Leichhardt’s expedition, since relics had been found in the north of the state near Mount Dare Station. It was assumed that they could have come from the expedition. However, it was a false lead. In 1953, the last search expedition to date took place. In 2006, Australian scientists authenticated a small copper plate with Leichhardt’s name. This plate had originally been discovered by an Aboriginal man near Sturt Creek in Western Australia. When the plate was found, it was attached to the stock of a partially burned rifle that was hanging from a baob tree. This tree was marked with the letter “L”. The copper plate is now part of the collection of the National Museum of Australia.

One theory on an unsolved mystery, [4]