You are here: Home › chemistry › Johann Joachim Becher and the Phlogiston Theory of Combustion 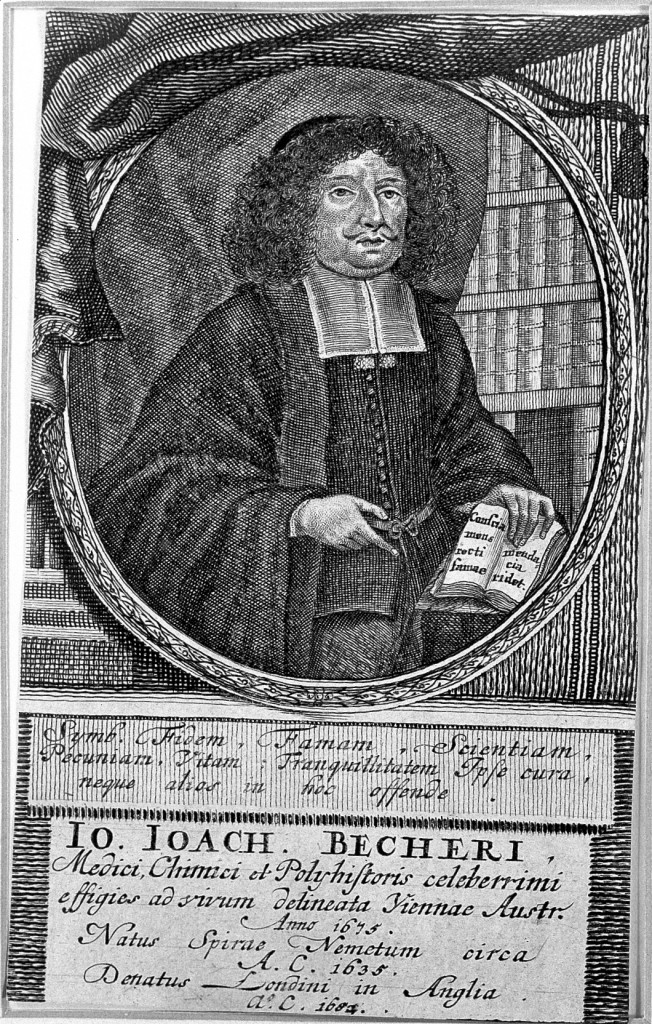 On May 6, 1636, German physician, alchemist, precursor of chemistry, scholar and adventurer Johann Joachim Becher was born. He is best known for his development of the phlogiston theory of combustion, in which all flammable objects were supposed to contain a substance which was released when the object burned, and his advancement of Austrian cameralism.

“The chemists are a strange class of mortals, impelled by an almost insane impulse to seek their pleasures amid smoke and vapour, soot and flame, poisons and poverty; yet among all these evils I seem to live so sweetly that may I die if I were to change places with the Persian king.”
— Johann Joachim Becher. Physica subterranea (1667). Quoted in R. Oesper, The Human Side of Scientists (1973), p.11.

Johann Joachim Becher was born in Speyer, Germany. His father, a Lutheran minister, died while he was a child, leaving a widow and three children. At the age of thirteen Becher found himself responsible not only for his own support but also for that of his mother and brothers. He learned and practiced several small handicrafts, and devoting his nights to study of the most miscellaneous description and earned a pittance by teaching. From 1650 on he travelled Europe visiting Stockholm, Amsterdam, and potentially also Italy. In 1652, he went to Mainz to study medical science, chemistry, and theology at the University of Mainz, where he attained his medical doctoral degree in 1661. Already before, in 1654 at the age of nineteen, he published an edition of Salzthal’s Tractatus de lapide trismegisto. His Metallurgia was published in 1660 and the next year appeared his Character pro notitia linguarum universali, in which he gives 10,000 words for use as a universal language.

In 1663, Becher took over the lectures of his father in law Ludwig von Hörnigk, a surgeon and lawyer at the University of Mainz. The title of his inaugural lecture was “Über die Wirklichkeit des Lapis philosophorum oder Stein der Weisen” (About the reality of the lapis philosophorum or the philosopher’s stone). Also in 1663, Becher published his Oedipum Chemicum and a book on animals, plants and minerals (Thier- Kräuter- und Bergbuch). 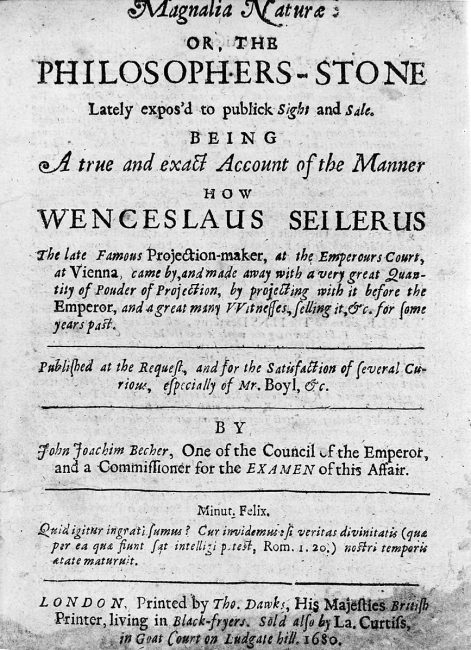 In 1666, he was made councillor of commerce at Vienna, where he had gained the powerful support of the prime minister of Emperor Leopold I. Sent by the emperor on a mission to the Netherlands, he wrote there in ten days his Methodus Didactica, which was followed by the Regeln der Christlichen Bundesgenossenschaft and the Politischer Discurs von den eigentlichen Ursachen des Auf- und Abnehmens der Städte, Länder und Republiken. In 1669, he published his Physica subterranea; the same year, he was engaged with the count of Hanau in a scheme to acquire Guiana from the Dutch West India Company. The Dutch desired settlers to hold their New World possessions and thus were eager for the German colonists and their trade. Although Becher’s colony project eventually failed, his discussion of the uses to which the colony could be put tells much about the knowledge of nature in such a project. In a pamphlet published to defend his part in this scheme, he waxed enthusiastic about the promise of sugar cultivation in the colony. As every courtier like Becher knew, sugar was an important exotic delicacy at court, firmly associated with the riches — commercial and natural — of the New World. Becher explained that sugar was an agricultural product that was not difficult to turn into cash, unlike the traditional agricultural goods of the German territories. This cash would go directly into the colonial ruler’s treasury as ordinary income, making no extraordinary tax burden on the ruler’s subjects.[3]

Meanwhile, he had been appointed physician to the elector of Bavaria; but in 1670 he was again in Vienna advising on the establishment of a silk factory and propounding schemes for a great company to trade with the Low Countries and for a canal to unite the Rhine and Danube. By 1678 Becher was in Holland trying to sell the Dutch assembly on a process for extracting gold from sea sand. He built a small demonstration process. Then he suddenly deserted his family and ran to England without building the pilot plant. He crossed to England and travelled further to Scotland where he visited the mines at the request of Prince Rupert. He afterwards went for the same purpose to Cornwall, where he spent a year. At the beginning of 1680, he presented a paper to the Royal Society in which he attempted to deprive Huygens of the honour of applying the pendulum to the measurement of time. In 1682, he returned to London, where he wrote the Chymischer Glücks-Hafen, Oder Grosse Chymische Concordantz Und Collection, Von funffzehen hundert Chymischen Processen and died in October of the same year.

Becher is best known for his phlogiston theory of compustion. He believed substances to be composed of three earths, the vitrifiable, the mercurial, and the combustible. He supposed that when a substance burned, a combustible earth was liberated.[2] Prussian physician and chemist Georg Ernst Stahl edited and republished Becher’s major chemical work and took up Becher’s idea of three earths that gave all metals and minerals their characteristics.[7] In Stahl’s hands, one of Becher’s three earths, the terra pinguis, became the basis for Stahl’s phlogiston theory.[4,3] Becher had explained the calcinations of metals on the supposition that they consisted of an earth and a something of which they became deprived on ignition. The burning of brimstone was, in like manner, though to be its resolution into an acid and true sulphur, or that combustible part which was dispelled by heat. It was this supposed combustible body to which the name phlogiston (Greek for combustible) was applied by Stahl – the material aut principium ignis non ipse ignis.[5]

Oddly Comfortable in Both Camps

Chemistry as an earnest and respectable science is often said to date from 1661, when Robert Boyle of Oxford published The Sceptical Chymist — the first work to distinguish between chemists and alchemists — but it was a slow and often erratic transition.[8] According to author Bill Bryson, 17th century scholars like Johann Joachim Becher could feel oddly comfortable in both camps. On the one hand Becher produced sober and unexceptionable work on mineralogy in his Physica Subterranea, but he also was certain that, given the right materials, he could make himself invisible.[1]