You are here: Home › aviation › Charles Lindbergh’s Flight with the Spirit of St. Louis 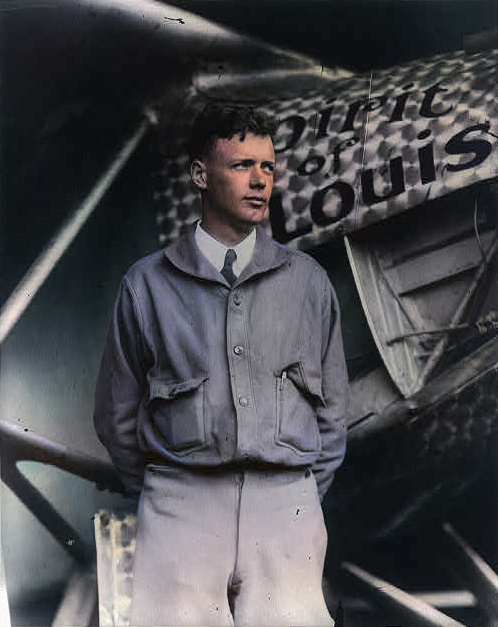 “Our ideals, laws and customs should be based on the proposition that each generation, in turn, becomes the custodian rather than the absolute owner of our resources and each generation has the obligation to pass this inheritance on to the future.”
– Charles Lindbergh

An Enthusiasm for Aviation

Charles Augustus Lindbergh, Jr., was born in Detroit as the grandson of a Swedish immigrant who left his homeland for political reasons and took the name Lindbergh when he emigrated. His father Charles Augustus Lindbergh (1859-1924) was a lawyer and congressman for Minnesota, his mother Evangeline Lodge Land Chemistry teacher. It is believed that Lindbergh was fascinated by aviation from early age and his enthusiasm increased during his engineering studies at the University of Wisconsin in Madison, where he started in 1920. However, he didn’t finish his studies. Lindbergh entered a Lincoln, Nebraska flying school in 1922 and first served as a mechanic, wingwalker, and parachute jumper. It is believed that his first solo flight was accomplished about one year later. For a few months Lindbergh teamed up with another pilot for flight demonstrations, but he did not fly himself, only parachute jumps. After that he bought his own aircraft, a Curtiss JN-4 “Jenny”, with which he acquired the experience he still lacked and travelled the country as an aerobatic pilot until 1924. Charles Lindbergh managed to graduate first in his class at the U.S. Army flying school, San Antonio and became the first air mail pilot between Chicago and St. Louis.

Already in 1919, the New York hotel businessman Raymond Orteig offered $25.000 for the first non-stop flight between New York and Paris, and Lindbergh decided to challenge a group of businessmen in St. Louis to back him in an attempt to win the prize.  Some pilots had already failed in this task. Lindbergh contacted the rather unknown aircraft manufacturer Ryan Aeronautical in San Diego and asked if Ryan could build a single-engine aircraft for this route. Ryan accepted the challenge, and by 28 April 1927 the aircraft was ready after only two months of development and construction. The plane was christened the Spirit of St. Louis and was designed and constructed with Lindbergh’s help by Ryan Airlines of San Diego.

Take Off in New York

In May 1927, Charles Lindbergh took off from New York City to France’s capital city. It is believed that he packed only a few sandwiches, water and most importantly maps and charts. Lindbergh refused to take a parachute and radio with him in order to save fuel. The Spirit of St. Louis was a single-engine monoplane and most people believed it not to be capable of crossing the  Atlantic Ocean, as most long distance pilots favored multi-engine planes. However, after 33.5 hours and 3600 miles, Charles Lindbergh set his plane down at Le Bourget Field near Paris.

Landing in Paris and instant Fame

The pilot’s fame came almost instantly. He received the Congressional Medal of Honor, was congratulated by many countries, and made a U.S. tour in the Spirit of St. Louis to promote the commercialization of aviation after his heroic flight. He also made several trips to Latin American countries to promote aviation and met his future wife Anne Morrow, the daughter of the American ambassador. Of course, he taught his wife how to fly and she became the first known American woman to earn the glider pilot’s license. She became not only Lindbergh’s partner in life but also his co-pilot, radio operator and navigator.

It is further assumed that Lindbergh was responsible for inspecting the status of aviation in European countries and he convinced the U.S. government to strengthen their air capability due to Germany’s increasing air power. However, he did not support the entry of the U.S. into the European war. After the attack on Pearl Harbor, Lindbergh served as a technical advisor as well as test pilot for United Aircraft. During his active years in aviation, Lindbergh also chaired the National Advisory Committee for Aeronautics and authored several books, which are also considered successful. The Spirit of St. Louis was probably his most successful work. The autobiographical by Charles Lindbergh focused on the events leading up to and including his 1927 solo trans-Atlantic flight in the Spirit of St. Louis. It was published in 1953, and won a Pulitzer Prize one year later.

However, Lindbergh was not, as often claimed, the first ever to cross the Atlantic. In fact, he was already the 67th person to do so, because the first non-stop Atlantic crossing by plane was made by John Alcock and Arthur Whitten Brown as early as 1919.[3]