You are here: Home › aviation › Henri Farman and the first long-distance Passenger Airliner 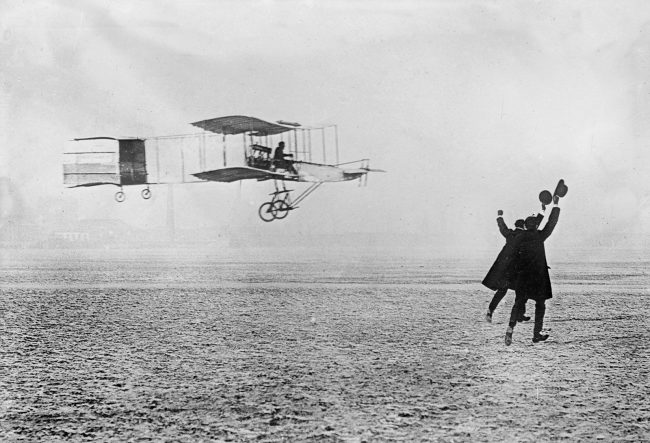 On May 26, 1876, Anglo-French pilot, aviator and aircraft designer and manufacturer Henri Farman was born. As an aircraft designer he developed ailerons to solve the enormously difficult and dangerous problems of lateral control. The Farman “Goliath” produced by his aircraft manufacturing company was the first long-distance passenger airliner, beginning regular Paris–London flights on 8 Feb 1919.

Henri Farman was born in 1876 in Paris. His family was quite well situated with his father being a British newspaper correspondent. The young man was first most interested in arts and was educated a painter at the École des Beaux Arts. However, it is believed that he was soon more enthusiastic about new mechanical inventions that were rapidly appearing at the end of the 19th century. Since his family had enough money to support his interests, Farman was able to start a career as an amateur sportsman. In the 1890s he became a championship cyclist, and at the turn of the century he discovered motor racing, competing for Renault in the Gordon Bennett Cup.

About 1907, the brothers Gabriel Voisin and Charles brothers started their aircraft construction business. The business was one of the first of its kind and after Charles died in an automobile accident in 1912, it was continued by Gabriel Voisin with the official name Société Anonyme des Aéroplanes G. Voisin. They probably managed to create Europe’s first manned, heavier-than-air powered aircraft capable of a sustained (1 km), circular, controlled flight, including take-off and landing, the Voisin-Farman I. Henri Farman was one of their very first customers. He ordered a copy of the aircraft that had been built for Leon Delagrange and used the the Voisin 1907 biplane to set numerous official records for both distance and duration. It is also believed by some historians that Farman became the first to take a passenger into the air, Leon Delagrange. In 1908, Farman went on to make the first cross-country flight in Europe, flying from Châlons to Reims. Henri Farman opened a flying school at Châlons-sur-Marne at which George Bertram Cockburn was the first student. However, Farman continued breaking further record flights including a flight of 180 kilometres in just over 3 hours and another one of 232 kilometres in 4 hours and 17 minutes.

Farman began to develop his own aircraft designs around 1909. The first was the Farman III and was an immediate success. Farman’s brothers Maurice and Richard joined a fruitful partnership with him and they built a highly successful and innovative aircraft manufacturing plant. After the start of World War I, their model was used extensively for artillery observation and reconnaissance. Farman was quick to press the Farman Goliath into service and made several publicity flights. The Goliath was initially designed in 1918 as a heavy bomber capable of carrying 1,000 kg (2,200 lb) of bombs with a range of 1,500 km (930 mi). It was a fixed-undercarriage three-bay biplane of fabric-covered wood construction, powered by two Salmson Z.9 engines. It had a simple and robust, yet light structure. It was undergoing initial testing when World War I came to an end and Farman realized there would be no orders for his design. Nonetheless he was quick to understand that the big, box-like fuselage of the Goliath could be easily modified to convert the aircraft into an airliner. With the new passenger cabin arrangement, the Goliath could carry up to 12 or 14 passengers. It had large windows to give the passengers a view of the surroundings.

On 8 February 1919, the Goliath flew 12 passengers from Toussus-le-Noble to RAF Kenley, near Croydon. Since non-military flying was not permitted at that date, Lucien Bossoutrot and his passengers were all ex-military pilots, who wore uniform and carried mission orders for the circumstances. Later on, further flights were made to publicize the Goliath. On 8 February 1919, together with his brother Maurice, he founded the first scheduled airline Lignes Farman, which later became Air France. On 3 April 1919, 14 passengers were flown to an altitude of 6.200 m. Airlines quickly began to acquire the Goliath and in 1920, the Compagnie des Grands Express Aériens began scheduling regular flights between Le Bourget and Croydon, followed by the Compagnie des Messageries Aériennes. The routes were extended quickly over Europe.

Henri Farman was made a chevalier of the French Légion d’honneur in 1919 and retired in 1937 when the French Popular Front government nationalised the aircraft industry. Farman’s company became part of the Societe Nationale de Constructions Aeronautiques du Centre. Henri Farman died in 1958 at age 84.

At yovisto academic video search, you can learn more about Future Air Transportation and the Environment in a lecture by Ilan Kroo.