You are here: Home › philosophy › Friedrich Schlegel – Towards a unifying Presentation of Philosophy, Prose, Poetry, Genius and Criticism 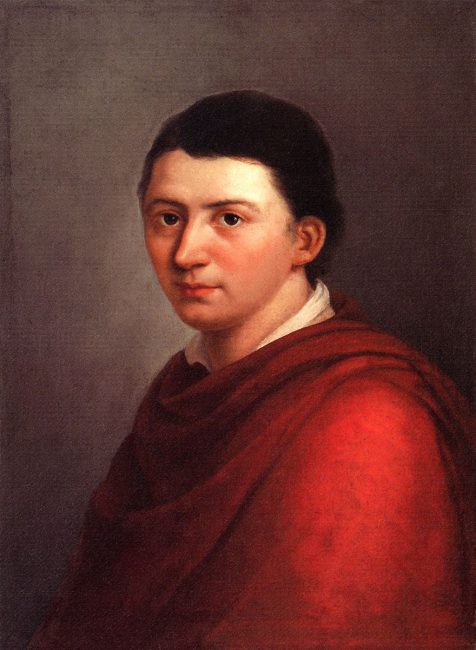 On March 10, 1772, German poet, literary critic, philosopher, philologist and indologist Friedrich Schlegel was born. A zealous promoter of the Romantic movement, together with his older brother, August Wilhelm Schlegel, he was one of the main figures of the Jena romantics. Schlegel was a pioneer in Indo-European studies, comparative linguistics, and morphological typology.

“It is equally deadly to the mind to have a system and not to have one. So it may have to choose to combine the two.”
– Friedrich Schlegel

Friedrich Schlegel was born in Hanover as the tenth child of the Lutheran pastor and poet Johann Adolf Schlegel. There was an artistically and intellectually open-minded environment in the family. The education was first entrusted to his uncle Johann August in Pattensen and then to his brother Moritz in Bothfeld. In 1789 his brother Karl August died in Madras. “At his pleading request” Schlegel broke off an apprenticeship as a merchant with the banker Schlemm in Leipzig, and he was allowed to prepare for university studies. He moved to his older brother August Wilhelm in Göttingen. He enrolled at Göttingen University in 1790 to study law but turned his attention to Classical Philology under the supervision of Christian Gottlob Heyne. When his brother moved to Amsterdam as a tutor in May 1791, he continued his studies of law after a year at the University of Leipzig. Out of reading frenzy, he devoted the next few years to Hellenism, Roman civilisation, philosophy of history, contemporary German literature (Weimar Classicism) and Jean-Jacques Rousseau.[1]

In January 1792 he met Friedrich von Hardenberg (who would later call himself Novalis),[2] with whom he had many common interests such as philosophy, history and literary theory, but also Friedrich Schiller.[3] In the summer of 1793 he gave up his studies because of debts and became a freelance writer. August 1793 he became friends with the witty, pregnant widow Caroline Böhmer, daughter of a Göttingen theologian and orientalist Both friendships had a decisive influence on his further life, as they supported him in his literary activities. In January 1794 he moved to Dresden to his sister Charlotte. There he lived in seclusion, but met Christian Gottfried Körner and published his first work, Von den Schulen der griechischen Poesie (The Greek Poetry Schools), which was mainly concerned with “Reflections on Metrics” of classical antiquity.

In 1795 he made the acquaintance of Johann Friedrich Reichardt, who – like Caroline – was an enthusiastic supporter of the French Revolution, republicanism and democratism. The collaboration with his journal Deutschland secured his livelihood since 1796. In July 1796 Schlegel had followed his brother August Wilhelm and his wife Caroline to Jena. Increasingly he was occupied with philosophy, where he was strongly influenced by the philosophy of Johann Gottlieb Fichte,[4] with whom he was friends. During his first stay in Jena the young Schlegel also made fruitful acquaintances with writers of the “older generation”: Johann Gottfried Herder,[5] Christoph Martin Wieland and Johann Wolfgang von Goethe.[6] It was in contact with their works that he developed his famous literary theory.

By the end of 1797 the term Romanticism for Schlegel had already gained many facets. In a letter to his brother August Wilhelm, he wrote: “I cannot send you my explanation of the word Romantic well, because it is – 125 sheets long“. Literature was no longer supposed to follow certain schemes for the creation of a literary work, as in the Classical period, but rather regarded the artist as a freelance genius. The poetics of rules and the demands of the three Aristotelian units of space, time and action lost their significance; rather, the novel became the author’s subjective playing field. The aim was – according to Schlegel – to combine philosophy, prose, poetry, genius and criticism.

In 1797 he met Friedrich Schleiermacher, the preacher at the Charité in Berlin. Schleiermacher and Schlegel lived in a small apartment, read together the works of Fichte, translated Plato and discussed heatedly about the art of living. He also made the acquaintance of Rahel Varnhagen von Ense, Ludwig Tieck, Dorothea Veit, the daughter of Moses Mendelssohn, in the literary salon of Henriette Herz, with whom he lived after her divorce in 1798. This period is programmatically overstated in his novel Lucinde (1799). In 1798 the Schlegel brothers founded the aesthetic-critical journal Athenäum. It is regarded as the linguistic organ of Jena’s early Romanticism

“Our knowledge is nothing. We listen only to rumor.”
– Friedrich Schlegel

In 1799, the two brothers, August Wilhelm’s wife Caroline and Dorothea Veit lived together as a foursome for half a year in Jena. This “Romanticist flat-sharing community” formed the core of the Jena Romanticism. The authors broke with many conventions: For example, they mixed poems and ballads, little fairy tales, etc. into their novels. But this life lasted only a “blink of an eye of world history“. In August 1800 Friedrich Schlegel habilitated at the University of Jena and taught as a private lecturer.  At the university he lectured on transcendental philosophy (1801). When the shared apartment was dissolved, he left Jena in December 1801. Schlegel took up residence with Tieck in Dresden

After the Peace of Amiens, Schlegel found himself in Paris to study the art collections in the hope of finding a new job or a lost primeval unit, the Golden Age. There he lived in a former apartment of the Baron d’Holbach, together with the brothers Boisserée and Alexander Hamilton, who was a prisoner of the Napoleonic wars in Paris and one of the few Sanskrit experts of his time. He studied Indology, the Persian language as a pupil of Antoine-Léonard de Chézy and comparative linguistics, because he wanted to know which languages were related; the results of his reflections concerned the first sound shift and the morphological typology of language.

The Romanticism at the beginning of the 19th century led to an enthusiasm in Germany for medieval buildings, especially for the great Gothic cathedrals and castles. In 1804/05, Schlegel praised the Gothic style epoch in basic features of Gothic architecture and, like Goethe, spoke of “German architecture”. In 1808, Über die Sprache und Weisheit der Indier (On the Language and Wisdom of the Indians) was published, a fruit of his Parisian studies, in which he set out his romantic ideas on language, religion and culture. It was Schlegel who introduced the term comparative linguistics. Schlegel compared Sanskrit with Latin, Greek, Persian and German and demonstrated many similarities in vocabulary and grammar. After some editing and reformulation, the assertion of the commonalities of these languages is generally accepted today.

In 1810 he gave lectures “On modern history” and in 1812 lectures on “History of old and new literature“. In 1814 Pius VII appointed him “Knight of the Pontifical Order of Christ”. In 1818 he made a trip to the Rhine together with August Wilhelm, who had become holder of the first chair of Indology in Germany at the University of Bonn. In Paris, he had had letters for the Indian Devanagari alphabet made in order to print the first Sanskrit texts in Europe. With Concordia, Friedrich founded another journal in 1820.  He condemned the modern age as a whole and pleaded for the restoration of the medieval order of estates. The discord that arose between the brothers was no longer bridged and in 1828 led to August Wilhelm publicly distancing himself from Frederick. After he had given his lectures in Vienna on the Philosophy of life (1827) and on the Philosophy of history (1828), he traveled to Dresden in 1828, where he prepared lectures on the Philosophy of language and word.

Friedrich von Schlegel died on January 12, 1829 completely unexpectedly of a serious stroke in his inn.