You are here: Home › explorer › Pedro Álvares Cabral and the Discovery of Brazil 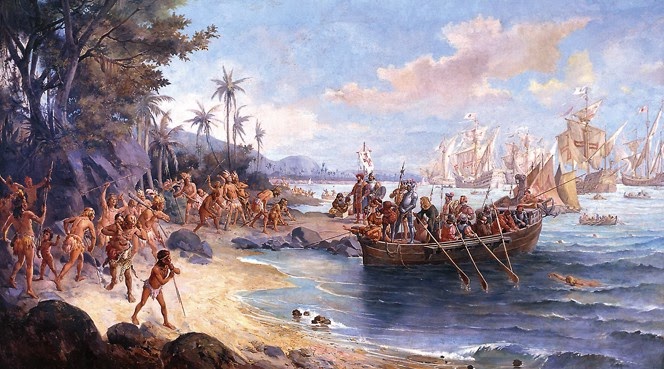 On March 9, 1500, Portuguese explorer Pedro Álvares Cabral set sail with a fleet of 13 ships to establish a trade route to India. But, due to a storm his ships got lost and he should become one of the first Europeans to reach the coast of Brazil.

While details of Cabral’s early life are unclear, it is known that he came from a minor noble family and received a good education. He was born in 1467 or 1468 at Belmonte, about 30 kilometres  from present-day Covilhã in central Portugal. Family lore said that the Cabrais were descendants of Caranus, the legendary first king of Macedonia. Pedro Álvares Cabral was sent to the court of King Dom Afonso V at the age of about 12 and received a decent education in humanity and fighting. Records of his deeds prior to 1500 are extremely fragmentary, but Cabral may have campaigned in North Africa, as had his ancestors and as was commonly done by other young nobles of his day. In February 1500, Cabral was appointed commander-in-chief of a fleet sailing toward India. Regardless of their experience or competence, it was back then common for the Portuguese Crown to appoint nobles to naval and military commands. Since authority could as easily be given to highly incompetent and unfit people as it could fall to talented leaders such as Afonso de Albuquerque or Dom João de Castro, the practice often suffered from obvious fails.

Cabral became the military chief, while far more experienced navigators were seconded to the expedition to aid him in naval matters. They would, along with the other captains, command 13 ships and 1,500 men. Of this contingent, 700 were soldiers, although most were simple commoners who had no training or previous experience in combat. The fleet had two divisions. The first division was composed of nine naus (carracks) and two round caravels, and was headed to Calicut in India with the goal of establishing trade relations and a factory (trading post). The second division, consisting of one nau and one round caravel, set sail for the port of Sofala in what is today Mozambique.

An earlier fleet had been the first to reach India by circumnavigating Africa. That expedition had been led by Vasco da Gama and returned to Portugal in 1499.[3] For decades Portugal had been searching for an alternate route to the East, in order to bypass the Mediterranean Sea which was under the control of the Italian Maritime Republics and the Ottoman Empire. However, Cabral’s fleet departed on 9 March 1500 from Lisbon, sailing towards Cap Verde. After the arrival, 150 men under the command of Vasco de Ataíde disappeared without any trace. The Equator was crossed in early April and some days later, the feel sighted seaweed, thinking they were near the cost, which they indeed reached on 22 April. The Portuguese detected inhabitants on the shore ordered Nicolau Coelho, a captain who had experience from Vasco da Gama’s voyage to India, to go ashore and make contact. After a short meeting with the indigenous people, the fleet took off and anchored in what became known as Porto Seguro. 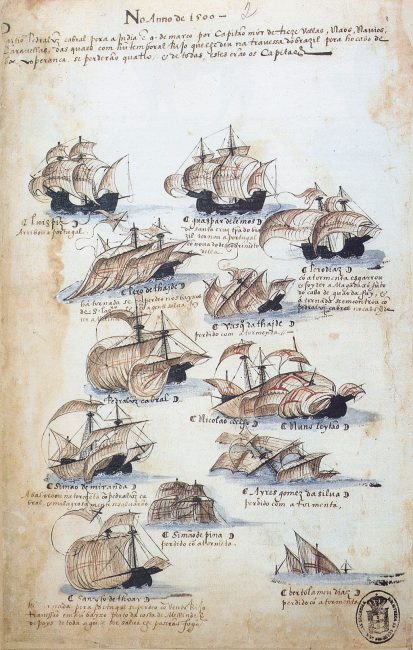 Twelve of 13 ships that were part of Cabral’s fleet are depicted. Many were lost, as can be seen in this drawing from Memória das Armadas, c.1568

The crew met further inhabitants and Cabral presented them with gifts. It was recorded that the first meetings went by rather friendly. They found out that the inhabitants were stone age hunter-gatherers, divided into rival tribes. After more and more curious and friendly natives appeared, Cabral ordered his men to build an altar inland where a Christian Mass was held. This was the first celebrated on the soil of what would later become Brazil. Next to stockpiling water and food, the Portuguese spent a lot of time celebrating their Christian rituals and building a massive 7 metres long wooden cross. In honor of the new cross, Cabral named the newly discovered land Ilha de Vera Cruz (Island of the True Cross). A supply ship then took off under the command of Gaspar de Lemos or André Gonçalves in order to return to Portugal, apprising the King of the discovery. 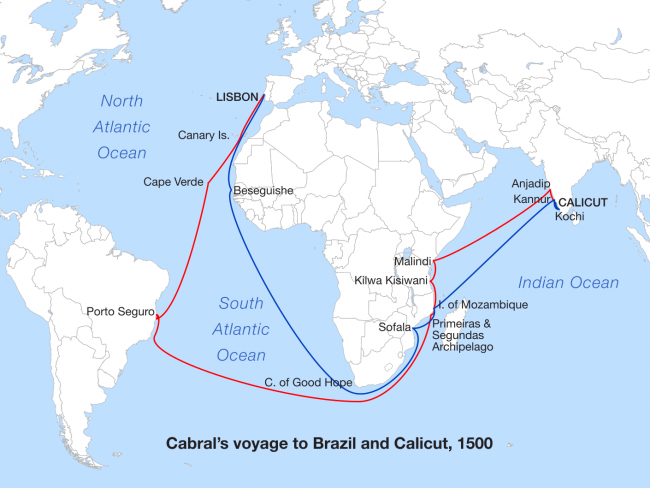 Route taken by Cabral from Portugal to India in 1500 (in red), and the return route (in blue)

The rest of the fleet continued its journey along the coast and was soon convinced that they did not just find another island, but a whole continent. In the beginning of May, they traveled towards Africa and encountered a storm in the South Atlantic’s high-pressure zone, resulting in the loss of four ships and 380 men. The remaining vessels were separated but most of them were able to regroup. After being helped by East African inhabitants, the crew managed to repair their ships and continued their journey to Calicut, arriving on 13 September 1500. Cabral obtained permission to establish a factory and a warehouse and dispatched his men on several military missions at the Zamorin’s request, hoping to furtherly improving their relations. Unfortunately, the factory suffered a surprise attack by some 300 Muslim Arabs and Hindu Indians, which resulted in the death of 50 Portuguese. Cabral was outraged by the attack and seized 10 Arab merchant ships at anchor in the harbor. Around 600 of their crews were killed and the cargoes confiscated before the merchantmen were set afire. The Portuguese also ordered his ships to bombard Calicut for an entire day in reprisal for the violation of the agreement. Next to the battles, the Portuguese were determined to dominate the spice trade and had no intention of allowing competition to flourish. The Arabs also had no desire to allow the Portuguese to break their monopoly on access to spices, which caused new problems and the Portuguese and Arabs were extremely suspicious of each other’s every action.

Cantino planisphere 1502, one of the earliest surviving charts showing the explorations of Pedro Álvares Cabral to Brazil. The Tordesillas line is also depicted.

In July 1501, two ships returned home empty, five were fully loaded and six were lost. Nonetheless, the cargoes carried by the fleet returned up to 800% profit to the Portuguese Crown. Once sold, the proceeds covered the outlay in equipping the fleet, covered the cost of the vessels which had been lost, and cleared a profit which itself exceeded the total sum of those costs.