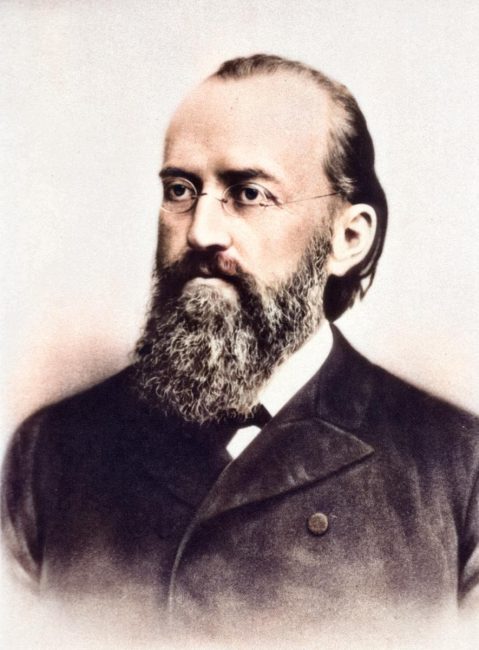 On August 5, 1834, German physiologist Ewald Hering was born. Hering is best known for his research into color vision, binocular perception and eye movements. Hering challenged the color-vision theory of Hermann von Helmholtz. Visual sensations, according to Hering‘s view, were due to three color receptors responding in an “opponent” fashion in color-pairs (white/black, yellow/blue, and red/green) to take account of the after-images of colors.

Ewald Hering was born in Altgersdorf, a small town south of Berlin, in Saxony, Germany, in a probably poor family, son of a Lutheran pastor. Hering attended gymnasium in Zittau and entered the University of Leipzig in 1853. There he studied philosophy, zoology and medicine, and was influenced by Ernst Heinrich Weber, one of the founders of experimental psychology, and Gustav Theodor Fechner, the founder of psychophysics [2]. He completed an M.D. degree in 1860.

The Mathematical Derivation of the Horopter

After graduating, he practiced as a physician in Leipzig. With little time to do research and even scarcer financial resources, he turned to binocular vision and the problem of the horopter. In 1862 he was habilitated as Dozent (lecturer) in physiology. He surprised the scientific community when he published, as a completely unknown scientist, his own mathematical derivation of the horopter independently from Hermann von Helmholtz, who was by then considered one of the best German scientist and mathematician.[5] Hering went as far as ridiculing Helmholtz’s (unimportant) mathematical errors in his derivation of the horopter. Despite identical results, Hering’s derivation was far more modern, using recently developed projective geometry, and elegant. The horopter is the locus of points in space that have the same disparity as fixation. This can be defined theoretically as the points in space which project on corresponding points in the two retinas, that is, on anatomically identical points. The horopter can be measured empirically in which it is defined using some criterion. Subsequently, Hering empirically estimated the shape horopter. He noticed, alongside with Helmholtz and Hillebrand, that the empirical horopter does not perfectly match the theoretical horopter, a phenomenon now named the Hering–Hillebrand deviation.

Hering is also famous for the Hering’s law of visual direction which describes the perceived egocentric direction of an object in function of the direction of this object in the two retinaes of the two eyes. Unbeknownst to Hering, and other visual scientists of the time, a similar law had been proposed by Alhazen in the 10th century and by Wells in the 18th century, although both their laws were different and not completely correct.

Hering disagreed with the leading theory developed primarily by Thomas Young, James Clerk Maxwell and Hermann von Helmholtz.[5,6,7] Young proposed that color vision is based on three primary colors: red, green, and blue. Maxwell demonstrated that any color can be matched by a mixture of 3 primary colors. This was interpreted by Helmholtz as proof that humans perceive colors through 3 types of receptors, while white and black would reflect the amount of light.

Hering instead believed that the visual system worked based on a system of color opponency, though he had little empirical evidence to support this claim. In this model, colors are perceived through receptors sensitive to three couples of opponent colors: red-green, yellow-blue and white-black. Later, Erwin Schrödinger demonstrated that the first and the second model are mathematically equivalent.[8]

Hering and Helmholtz were Correct

Hering was subsequently appointed professor of physiology at the military academy of Vienna until 1870. With better resources he conducted important studies in physiology, in particular on the cardiac and respiratory systems. In 1870, he succeeded Purkinje at the University of Prague, where he remained for the next 25 years. There he became involved in fierce arguments between nationalistic Czechs who wanted the university taught in the language of the land, and a minority of German professors. Eventually a separate German university was created in 1882 and Hering became its first rector.

In his late years, Hering returned to Germany where he became professor at the University of Leipzig in 1895. There, he undertook his more mature work on visual sensation, which came out in four fasciculi from 1905 to 1920, the last published posthumously.[1] In 1906, the German Ophthalmological Society honored Ewald Hering by awarding him the Albrecht von Graefe Medal.[4] Hering retired in 1915 and died of tuberculosis on January 26, 1918, ages 83.

At the turn of the 20th century every undergraduate student of psychology was taught Hering’s and Helmholtz’ theories of vision. For a while Helmholtz’ conception seemed to prevail over Hering’s, but subsequently Hering’s view of antagonistic biological processes gained plausibility as a result of new research, and both types of theory continued to receive consideration at a sophisticated level.