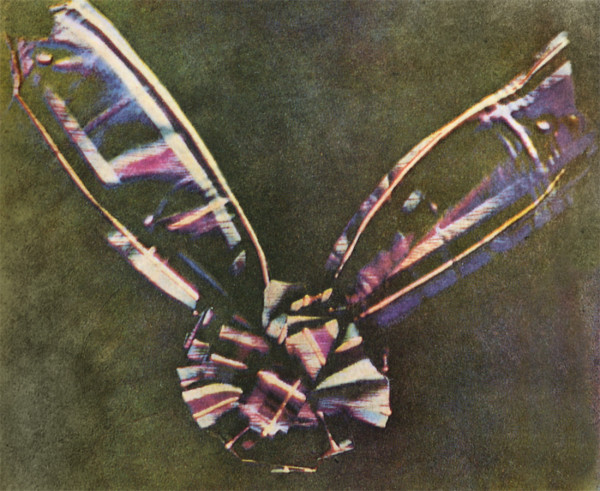 The first color photograph made by the three-color method suggested by James Clerk Maxwell in 1855, taken in 1861 by Thomas Sutton. The subject is a colored ribbon, usually described as a tartan ribbon.

On May 17, 1861, Scottish physicist Sir James Clerk Maxwell presented the very first colour photograph at the Royal Institution. The photograph showed a tartan ribbon and was made by Thomas Sutton according to the three-colour method proposed by Maxwell already in 1855.

James Clerk Maxwell and the 2nd Great Unification in Physics

We have already valued James Clerk Maxwell’s most prominent achievements in this blog such as formulating a set of equations that united previously unrelated observations, experiments, and equations of electricity, magnetism, and optics into a consistent theory.[1] According to his theory Maxwell has demonstrated that electricity, magnetism and light are all manifestations of the same phenomenon, namely the electromagnetic field. This has been called the “second great unification in physics”, after the first one realized by Isaac Newton. But, his interest and research in optics, also led to the three-colour process in photography.

The Theory behind the Three-colour Method

The three-colour method, which is the foundation of virtually all practical color processes whether chemical or electronic, was first suggested in an 1855 paper on colour vision by Maxwell. It is based on the Young-Helmholtz theory that the normal human eye perceives colour because the retina is covered with millions of intermingled cone cells of three different types: In theory, one type is most sensitive to the end of the spectrum we call “red”, another is more sensitive to the middle or “green” region, and a third which is most strongly stimulated by “blue”. The named colours are somewhat arbitrary divisions imposed on the continuous spectrum of visible light, and the theory is not an entirely accurate description of cone sensitivity. Nevertheless, it coincides enough with the sensations experienced by the eye that when these three colors are used the three cones types are adequately and unequally stimulated.

Colour photography is based on experiments from the early days of photography. Around 1850/1851, the American Baptist preacher and daguero typist Levi Hill was the first to claim the invention of colour photography for himself. As proof he presented so-called hillotypes. However, these were of only very moderate quality and Hill also vehemently refused to disclose how his process worked, so that his claim was already viewed with skepticism by his contemporaries. In 1860, Niépce de Saint-Victor worked on a method of recording all colours on a single light-sensitive layer (heliochromy).

In his studies of color vision, Maxwell showed, by using a rotating disk with which he could alter the proportions, that any visible hue or gray tone could be created by mixing only three pure colours of light – red, green and blue – in proportions that would stimulate the three types of cells to the same degrees under particular lighting conditions. To emphasize that each type of cell by itself did not actually see colour but was simply more or less stimulated, he drew an analogy to black-and-white photography: if three colorless photographs of the same scene were taken through red, green and blue filters, and transparencies made from them were projected through the same filters and superimposed on a screen, the result would be an image reproducing not only red, green and blue, but all of the colors in the original scene. Because Thomas Sutton’s photographic plates were in fact insensitive to red and barely sensitive to green, the results of this pioneering experiment were far from perfect.

The first (durable) colour photograph made according to Maxwell’s prescription, a set of three monochrome “color separations”, was taken by Thomas Sutton, who later invented the single-lens reflex camera and the first wide-angle lens, in 1861 for use in illustrating a lecture on colour by Maxwell. Maxwell had Sutton photograph a tartan ribbon three times, each time with a different colour filter (red, green, or blue-violet) over the lens. The three photographs were developed, printed on glass, then projected onto a screen with three different projectors, each equipped with the same colour filter used to photograph it. When superimposed on the screen, the three images formed a full-colour image. During his lecture, which was about physics and physiology, not photography, Maxwell commented on the inadequacy of the results and the need for a photographic material more sensitive to red and green light.

The three photographic plates now reside in a small museum at 14 India Street, Edinburgh, the house where Maxwell was born. Maxwell’s 1855 suggestion and this tentative 1861 demonstration appear to have been quickly and completely forgotten until being brought to light again in the 1890s. In the intervening decades, the basic concept was independently re-invented by several people. Corresponding colour photographic processes were developed in parallel by Louis Ducos du Hauron and Charles Cros [6] from about 1862 onwards and presented simultaneously in 1868. However, only du Hauron could demonstrate a patented and practicable process. du Hauron’s process was based on silver bromide collodium plates and produced pigment slides. However, both processes were based on the principle of tricolourism (trichromy). An entirely different approach was followed by Gabriel Lippmann, who is remembered as the inventor of a method for reproducing colors by photography, based on the interference phenomenon, which earned him the Nobel Prize in Physics for 1908.