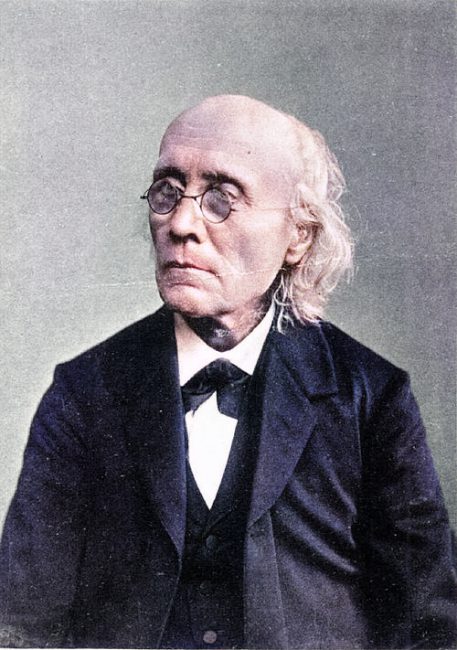 On April 19, 1801, German philosopher, physicist and experimental psychologist Gustav Theodor Fechner was born. An early pioneer in experimental psychology and founder of psychophysics, he inspired many 20th century scientists and philosophers. He is also credited with demonstrating the non-linear relationship between psychological sensation and the physical intensity of a stimulus, which became known as the Weber–Fechner law.

“Man lives on earth not once, but three times: the first stage of his life is his continual sleep; the second, sleeping and waking by turns; the third, waking forever.”
– Gustav Fechner

Gustav Fechner was born in Groß Särchen, Lausitz region, Saxonia. The family moved to Dresden in 1815, where Fechner attended the Kreuzschule, but was dismissed after a year and a half with the words: “You must leave, you can’t learn anything more with us.” So the sixteen-year-old enrolled as a medical student at Leipzig University. He studied physiology with Ernst Heinrich Weber and algebra with Carl Brandan Mollweide, otherwise he remained largely self-taught and was enthusiastic about the natural philosophy of Lorenz Oken. Oken is considered the most important representative of a romantic-speculative natural philosophy. With Isis, Oken published the first interdisciplinary journal in the German-speaking world for over thirty years. On his initiative the Society of German Natural Scientists and Physicians was founded, which became the model for numerous similar societies.

He Felt Little Talented as a Doctor

In 1819 Fechner became Baccalaureus, in 1823 Magister and private lecturer. He felt little talent as a doctor, especially the practical part of his studies had, according to his own words, “completely robbed him of his inclination and confidence“. Despite passing his medical exams, he earned his living through literary works. From around 1824 he translated the leading textbooks on physics and chemistry by Jean-Baptiste Biot and Louis Jacques Thénard. In 1828 he was appointed extraordinary professor. In 1833 Fechner married Clara Volkmann and took over the editorial office of the Leipziger Literaturzeitung.

In 1834, he was appointed professor of physics, however, after contracting an eye disorder, he turned to the study of the mind and its relations with the body, giving public lectures on the subjects dealt with in his books. In 1835 he became the director of the newly opened physics institute, which is considered one of the oldest in Germany. In 1839 he had to give up the physics professorship for health reasons, after his strenuous experiments in galvanism and physiological optics led to an eye disease that made him almost blind. In 1843 he became professor of natural philosophy and anthropology at the University of Leipzig; he held this post until his death in 1887.

Fechner also became increasingly enthusiastic about philosophy and probably the ultimate philosophic problem which concerned him, and to which his psychophysics was a solution, was the perennial mind-body problem. His solution has been called the identity hypothesis. It means that mind and body are not regarded as a real dualism, but are different sides of one reality. They are separated in the form of sensation and stimulus. That is, what appears from a subjective viewpoint as the mind, but it appears from an external or objective viewpoint as the body. In Fechner’s law (sensation intensity = C log stimulus intensity), it becomes evident that the dualism is not real. While this law has been criticized as illogical, and for not having universal applicability, it has been useful in research on hearing and vision.

One of Fechner’s speculations about consciousness dealt with brain. During his time, it was known that the brain is bilaterally symmetrical and that there is a deep division between the two halves that are linked by a connecting band of fibers called the corpus callosum. Fechner speculated that if the corpus callosum were split, two separate streams of consciousness would result – the mind would become two. Yet, Fechner believed that his theory would never be tested; he was incorrect. During the mid-twentieth century, Roger Sperry and Michael Gazzaniga worked on epileptic patients with sectioned corpus callosum and observed that Fechner’s idea was correct.

The principle of the uniform linkage of the manifold

Man has an innate need for variety. But the alternation must be connected by something, must show a unity. The longer the occupation with an object lasts, the higher should be its manifoldness, in order not to become boring. A manifoldness that has no unity is perceived as chaotic. The relation of single parts to each other can be very simple (like in a circle, where each part behaves exactly the same to the other parts) or highly complex. A single (even complete) interruption of a uniformity is its strongest disturbance, a stain on a white dress interrupts the continuous white. A regular interruption can compensate for and even exceed the disruption of the interruption by its regularity. Thus, most people prefer complex patterns to empty spaces. The more varied a thing is, the stronger the aesthetic sensation will be, provided a unity is perceived. If the unity is missing, one sees a chaos, which one cannot gain anything from. The higher the mental ability to perceive and process complex things, the greater the desire for them, and the faster boredom sets in with simple structures.

The aesthetic principle of association

“One finds an orange more beautiful than an appropriately painted wooden ball” – this is how Fechner explains the principle of association. The sensual eye may perceive the same thing, but the mental eye sees a lot more in the orange, such as the refreshing taste, but also the country of origin, and one’s own ideas regarding this country and its culture (summer, sunshine, sea, vacation, friendly people, etc.). What the sensory eye perceives (the direct impression) can be in harmony or in contradiction with what is associated. The older and more experienced a person is, the more the memories (associations) tend to override the actual experience. Young people, on the other hand, are far more impressionable. Depending on the experiences already gathered, associative demands are also made on new things. If these requirements are fulfilled, a feeling of unanimity occurs. If they are not fulfilled, we feel a contradiction.

Gustav Fechner’s most influential contribution were probably his ‘Elemente der Psychophysik‘ (Elements of Psychophysics), published in 1860 and his ‘Revision der Hauptpunkte der Psychophysik‘ (Revision of the Main Points of Psychophysics), published in 1882. Upon these works mainly rests Fechner’s fame as a psychologist. He established new methods of mental measurement, hence, beginning of quantitative experimental psychology. As part of the measurement were the method of just-noticeable differences, the method of constant stimuli, and the method of average error. Along with Wilhelm Wundt [9] and Hermann von Helmholtz,[10] Gustav Fechner is recognized as one of the founders of modern experimental psychology. His clearest contribution was the demonstration that because the mind was susceptible to measurement and mathematical treatment, psychology had the potential to become a quantified science. Theorists such as Immanuel Kant had long stated that this was impossible, and that therefore, a science of psychology was also impossible.[8]

In January 1830 he founded the Chemisches Zentralblatt together with the publisher Leopold Voß. In 1846 Fechner was co-founder of the Royal Saxon Society of Sciences in Leipzig. In 1859 Fechner was elected a member of the scholarly society Leopoldina. In 1873 Fechner was awarded an honorary doctorate in medicine, and in 1884 he was made an honorary citizen of the city of Leipzig. Little is known of Fechner’s later years, nor of the circumstances, cause, and manner of his death in 1887.