You are here: Home › physics › Thomas Young – The Last Man who Knew Everything 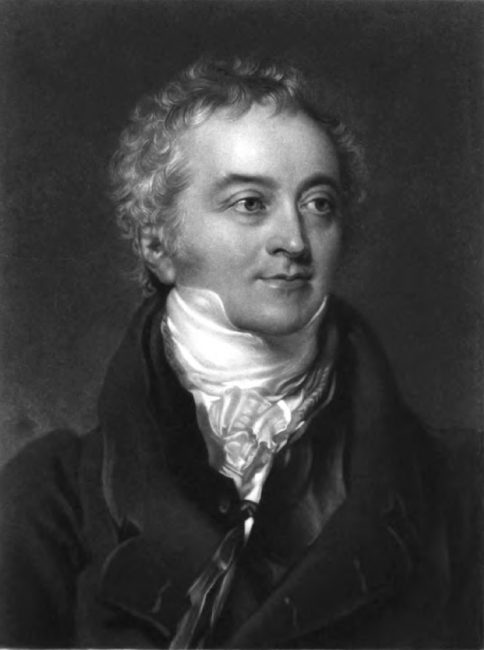 On June 13, 1773, British polymath and physician Thomas Young was born. Young made notable scientific contributions to the fields of vision, light, solid mechanics, energy, physiology, language, musical harmony, and Egyptology. He “made a number of original and insightful innovations” in the decipherment of Egyptian hieroglyphs (specifically the Rosetta Stone) before Jean-François Champollion eventually expanded on his work.[1]

The Youth of a Polymath

Young came from a family of Quakers, of Milverton, Somerset, UK, and was the eldest of ten children. He was a very versatile man who already knew several languages as a boy. Young began to study medicine in London at St Bartholomew’s Hospital in 1792, moved to the University of Edinburgh Medical School in 1794, and a year later went to Göttingen, Lower Saxony, Germany, where he obtained the degree of doctor of medicine in 1796 from the University of Göttingen. As early as 1794 he became a Fellow of the Royal Society, London, for his work on the near accommodation of the eye. From 1801 to 1804 he was Professor of Physics at the Royal Institute, most recently Secretary of the Board of Longitude. Young was the first to demonstrate that the wave theory of light could explain some phenomena that could not be reconciled with Isaac Newton‘s corpuscle theory, which regarded light as a particle stream, e.g. Newton’s rings.[2] In a lecture of 1801 (printed in 1802) he was the first to propose the so-called three-color theory of vision, which Hermann von Helmholtz further developed into the theory now called Young-Helmholtz theory.[3]

In 1801, Young was appointed professor of natural philosophy (mainly physics) at the Royal Institution. In two years, he delivered 91 lectures. In 1802, he was appointed foreign secretary of the Royal Society. He resigned his professorship already again in 1803, fearing that its duties would interfere with his medical practice. His lectures were published in 1807 in the Course of Lectures on Natural Philosophy and contain a number of anticipations of later theories.  In 1811, Young became physician to St George’s Hospital, and in 1814 he served on a committee appointed to consider the dangers involved in the general introduction of gas for lighting into London. In 1816 he was secretary of a commission charged with ascertaining the precise length of the second’s or seconds pendulum (the length of a pendulum whose period is exactly 2 seconds), and in 1818 he became secretary to the Board of Longitude and superintendent of the HM Nautical Almanac Office. 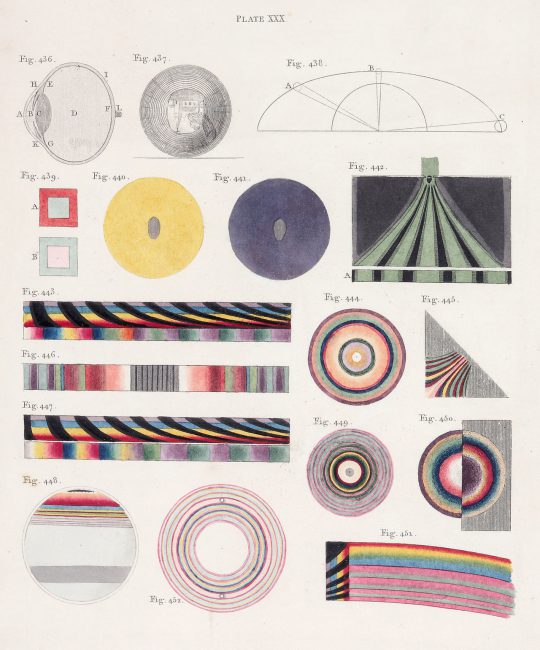 Thomas Young, A Course of Lectures on Natural Philosophy and the Mechanical Arts, 1807.

Inventing the Precurser of the Phonograph

Young was the first to measure the wavelengths of light and use interference in his experiments. He gave François Arago the impulse to treat light rays as transverse waves.[4] One of his experiments on the wave nature of light and interference was the double-slit experiment, which later played an important role in quantum mechanics. Jean Marie Constant Duhamel had discovered that a pencil could be combined with a tuning fork in such a way that it reproduced the vibrations of the tuning fork as a wavy line. Young built the first Kymograph (wave writer) based on this discovery, which he described in 1807 in A course of lectures on natural philosophy and mechanical arts. With this device he was able to record vibrations of a tuning fork on a soot-blackened rotating roller. His apparatus is regarded as a precursor of the phonograph and this principle as the basis for the recording and analysis of tones, such as the combination tone he examined.

The Wave Theory of Light

In Young’s own judgment, of his many achievements the most important was to establish the wave theory of light. To do so, he had to overcome the century-old view, expressed in the venerable Isaac Newton‘s Opticks, that light is a particle. Nevertheless, in the early-19th century Young put forth a number of theoretical reasons supporting the wave theory of light, and he developed two enduring demonstrations to support this viewpoint. With the ripple tank he demonstrated the idea of interference in the context of water waves. With the Young’s interference experiment, or double-slit experiment, he demonstrated interference in the context of light as a wave.

He also made significant contributions to the deciphering of Egyptian hieroglyphics. He was regarded as the main rival of the Frenchman Jean-François Champollion, who ultimately made the breakthrough – partly on the basis of Young’s findings.[1] However, neither could be confused by the widespread conviction of the scholars of the 17th century. They could not imagine that such an early culture had already used phonographic signs, but assumed that the hieroglyphs were ideograms. In the English-speaking world it was Thomas Young who introduced the term “Indo-European“. Young also made great progress in deciphering and translating the demotic, which he called the Enchorial. Because of this name, it was never acknowledged outside specialist circles and the deciphering was attributed to Heinrich Brugsch.[5]

Young was elected a Foreign Honorary Member of the American Academy of Arts and Sciences in 1822. A few years before his death he became interested in life insurance, and in 1827 he was chosen one of the eight foreign associates of the French Academy of Sciences. In 1828, he was elected a foreign member of the Royal Swedish Academy of Sciences. Thomas Young died in London on 10 May 1829, at age 55. Young was highly regarded by his friends and colleagues. He was said never to impose his knowledge, but if asked was able to answer even the most difficult scientific question with ease. Although very learned he had a reputation for sometimes having difficulty in communicating his knowledge. Later scholars and scientists have praised Young’s work although they may know him only through achievements he made in their fields. His contemporary Sir John Herschel called him a “truly original genius”.

Tom Campbell: The Key to Understanding Our Reality (from Spokane), [9]