You are here: Home › cinematography › Étienne-Jules Marey and the Chronophotographic Gun

On May 15, 1904, French scientist, physiologist and chronophotographer Étienne-Jules Marey passed away. Marey’s work was significant in the development of cardiology, physical instrumentation, aviation, cinematography and the science of laboratory photography. He is widely considered to be a pioneer of photography and an influential pioneer of the history of cinema.

Étienne-Jules Marey was born on March 5, 1830 in Beaune, Côte-d’Or, France. In 1838 he visited the Collège Monge in his hometown and after finishing school (1849) his father urged him to study medicine. Marey first went to the École polytechnique, which corresponded to his scientific and mechanical talent, and then to Paris in 1850 to study medicine. He first studied the blood circulation in the human body and later shifted to analyzing heart beats, respiration, muscles (myography), and movement of the body. In order to support his studies, Marey developed instruments for more precise measurements. An attempt to establish himself as a general practitioner failed. At the École Pratique he gave lectures on blood circulation and cardiovascular diseases. In 1859, he developed a wearable Sphygmograph to measure the pulse. He collaborated with Auguste Chauveau and the watch manufacturer Breguet on this project.

Around 1860, Marey was able to construct a delicate artificial insect to show how an insect flies and to demonstrate the figure-8 shape it produced during movement of its wings. In 1867 Marey received an assistant professorship at the Collège de France, an institution completely independent in research and teaching. In 1869 he took over the post of natural historian Marie-Jean-Pierre Flourens as professor for Histoire naturelle des corps organisés (Natural History) and continued experimental-physiological research there. In 1872 he was accepted into the Académie de Médecine (presidency 1900) and in 1878 into the more important Académie des Sciences, where he succeeded Claude Bernard. 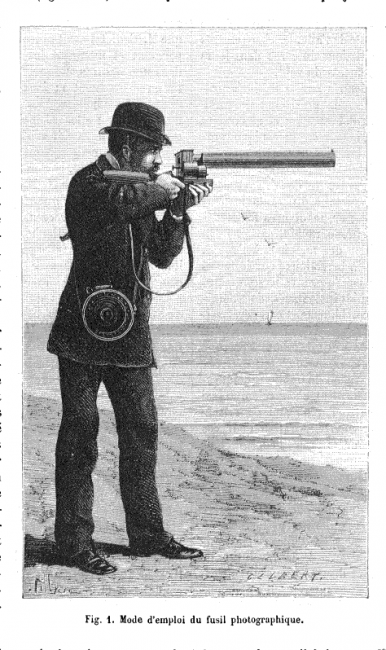 Later on he also began to examine larger flying animals like birds. Therefore adopted and further developed animated photography into a separate field of chronophotography in the 1880s. Marey’s famous chronophotographic gun was made in 1882. It was capable of taking 12 consecutive frames per second, with all the frames recorded on the same picture. Using these pictures he studied horses, birds, dogs, sheep, donkeys, elephants, fish, microscopic creatures, molluscs, insects, reptiles, etc. He also conducted the famous study about cats always landing on their feet. He conducted very similar studies with a chicken and a dog and found that they could do almost the same. Marey also studied human locomotion.

During a period of his life, Marey also made movies. He managed to create movies with about 60 images per second with an extraordinary quality for the time. His work helped to advance the area of cinematography. During his later career, Marey studied the movement of abstract forms. For instance, he observed and photographed smoke trails. This work was partially funded by Samuel Pierpont Langley under the auspices of the Smithsonian Institution. Marey’s movement studies exerted a magical fascination on many contemporary artists. Chronophotography influenced above all the works of the Italian Futurists (Bragaglia, Balla, Boccioni, Russolo) and abstract painters (Balla, Kupka, Duchamp).

From May to October 1900, the Summer Olympics took place in Paris as part of the World Exhibition. In order to take the opportunity to observe and study the best athletes in the world on site, a “Commission de physiologie et d’hygiène” was set up, in which Marey was involved in a leading position. In addition to chronophotography, a number of other measuring and recording devices developed by Marey were used in an extensive research programme. In 1895 Marey was appointed president of the Académie des Sciences and in 1900 knight of the Legion of Honour. Since 1902 he was a corresponding member of the Russian Academy of Sciences in St. Petersburg. In 1903 he was elected to the National Academy of Sciences.

In 1901, Marey managed to build a smoke machine with 58 smoke trails. It is believed to be one of the first aerodynamic wind tunnels. Marey’s last years were marked by the effort to establish an institute for research into technical methods and instruments. In 1902, under his direction, it was inaugurated near the physiological laboratory and named Institute Marey. 25 books and more than 280 scientific essays were published during his lifetime. However, the contents were repeated frequently. Marey wrote for scientists, doctors and the general public. Etienne-Jules Marey once gave himself the professional title ingénieur de la vie. Marey was a pioneer in circulatory physiology, blood pressure measurement, graphic recording technology, scientific photography, aeronautics and cinematography. He was instrumental in clarifying the basic principles of indirect blood pressure measurement and film.