You are here: Home › computer science › ENIAC – The First Computer Introduced Into Public 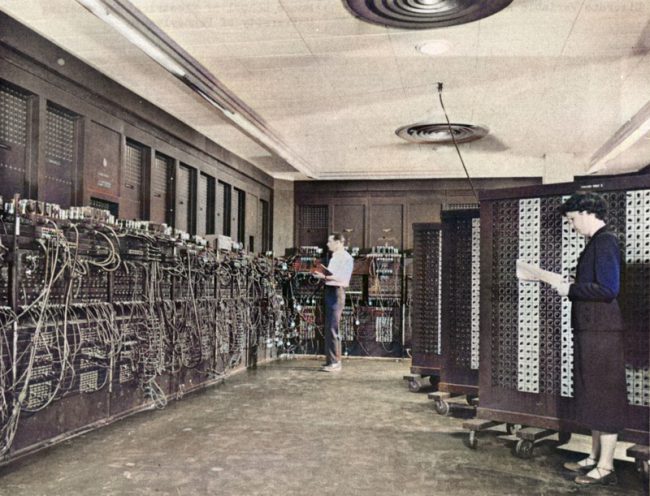 ENIAC on a picture of the US Army, Betty Holberton in the foreground, Glen Beck in the background

Actually, the research that lead to the development of ENIAC was sponsored by the US military. The army needed a computer for calculating artillery-firing tables, the settings used for different weapons under varied conditions for target accuracy. The Ballistics Research Laboratory (BRL), the branch of the military responsible for calculating these tables, heard about John Mauchly‘s research at the University of Pennsylvania, who had previously created several calculating machines, some with small electric motors inside. In 1942, Mauchly had begun designing an improved calculating machine based on the work of John Atanasoff that would use vacuum tubes to speed up calculations.[7] Finally, on May 31, 1943, the military commission on the new computer began with 32 year old John Mauchly as chief consultant and 24 year old John Presper Eckert Jr., a genius graduate student from Moore School, as chief engineer. It took the team about one year to design the ENIAC and 18 months and US$ 500,000 to build it. However, by the time they had finished construction, the war was over. But, the ENIAC was still put to work by the military doing calculations for, as e.g., the design of hydrogen bombs, weather prediction, cosmic-ray studies, but also wind-tunnel design.

The ENIAC combined, for the first time, the high speed of electronics with the ability to be programmed for many complex problems. It could add or subtract 5000 times a second, a thousand times faster than any other machine. It also had modules to multiply, divide, and square root. High speed memory was limited to 20 words (about 80 bytes). Built under the direction of John Mauchly and J. Presper Eckert at the University of Pennsylvania, ENIAC‘s development and construction lasted from 1943 to full operation at the end of 1945. The machine was huge, weighing 30 tons, and contained over 18,000 vacuum tubes. One of the major engineering feats was to minimize tube burnout, which was a common problem at that time.

The machine was in almost constant use for the next ten years. ENIAC employed paper card readers obtained from IBM, by the time a long established part of IBM‘s business accounting machines. During operation, the ENIAC was silent but you knew it was on as the 18,000 vacuum tubes each generated waste heat like a light bulb and 174,000 watts of heat meant that the computer could only be operated in a specially designed room with its own heavy duty air conditioning system. One of the most difficult problems to solve was that ENIAC‘s design would require 18,000 vacuum tubes to all work simultaneously. But, vacuum tubes were notoriously unreliable. The idea that 18,000 tubes could work together was considered so unlikely that the dominant vacuum tube supplier of the day, RCA, first refused to join the project. By the time ENIAC was working, about 2000 of the computer’s vacuum tubes had to be replaced each month by a team of six technicians.

ENIAC was definitively a so-called ‘Turing-complete‘ device, i.e. it was not restricted to special problems, but could compute any problem – well, of course only if this problem would fit in the considerably small memory. A “program” on the ENIAC, however, was defined by the states of its patch cables and switches, a far cry from the stored program electronic machines that came later. Once a program was written, it had to be mechanically set into the machine. Six women did most of the programming of ENIAC. Improvements completed in 1948 made it possible to execute stored programs set in function table memory, which made programming less a “one-off” effort, and more systematic.

From ENIAC to UNIVAC

About 10 percent of the historic computer lives on in the same basement room where it was created. ENIAC‘s 50th anniversary was celebrated in 1996 with a visit by Vice President Al Gore. What was left of the old computer was fired up one last time. Today, ENIAC is generally closed but special arrangement can be made to see it by contacting the University’s electrical engineering school at 33rd and Walnut. Eckert and Mauchley eventually formed their own company, which was later bought by the Rand Corporation. They produced the Universal Automatic Computer (UNIVAC), which was the first commercially available computer, but this is a completely different story…[6]